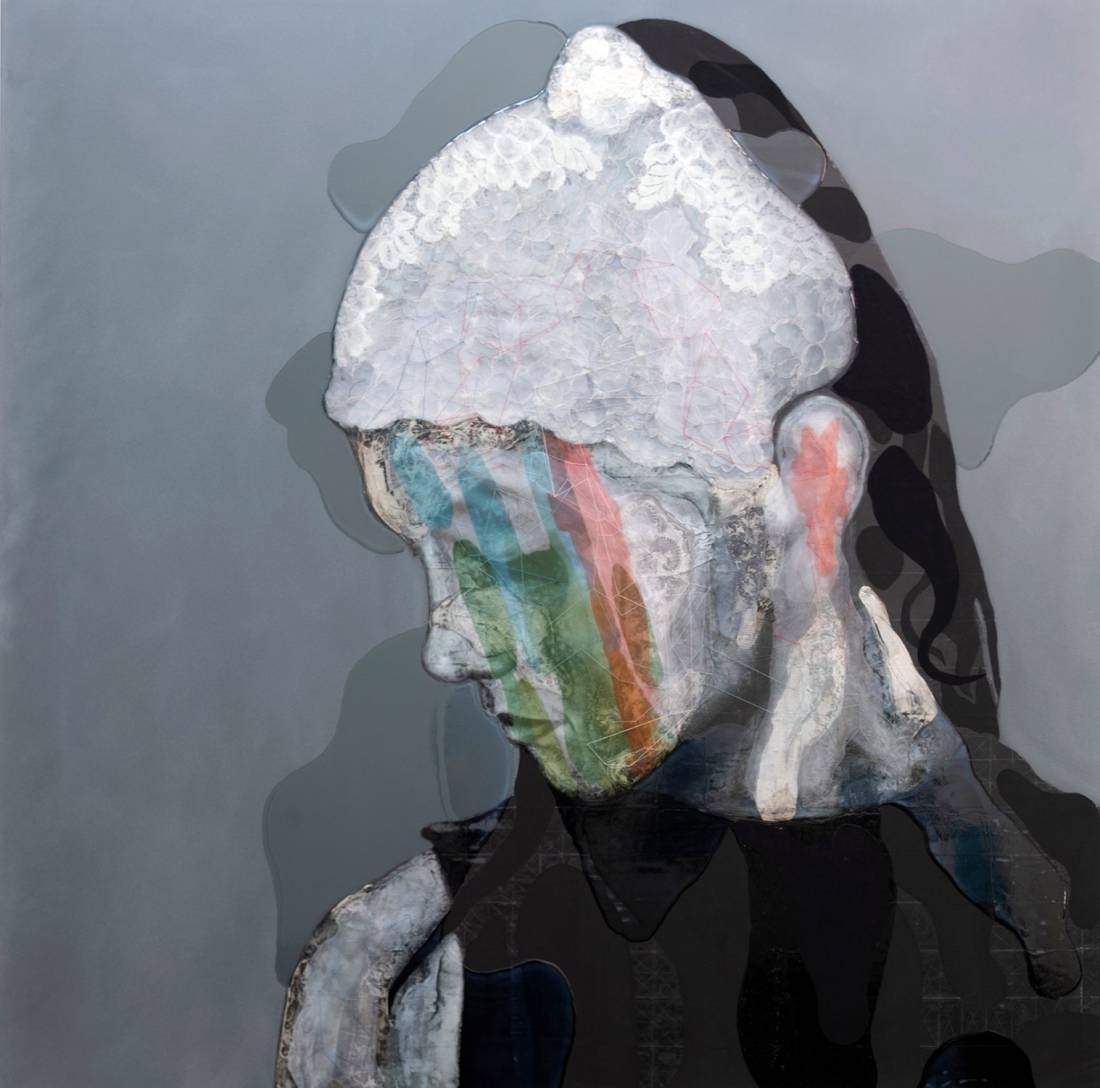 For Rogelio Manzo, the practice of portraiture is more than a way to capture a likeness. His darkly compelling images of the human figure reflect a blend of cultural influences -as well as an underlying concern with the fragility of life-. In his work Manzo seeks to reveal the character of his subjects as they are “forced” to be themselves. He goes beneath the body’s protective layer of skin, which registers all personal events that scar the human being, to reveal their fragility and inevitable mortality.

“Through these works I am exploring the different stages of our lives as human beings,” Manzo explains. “For me the skin is not only our protective varnish against harmful exterior forces or the medium with which to be touched and caressed, it is also where we register all of our personal events that somehow had touched us enough to scar us.”

Manzo studied architecture while simultaneously making an informal study of painting. But he found architecture “too strict.” In the following years, he brought his architectural and drafting skills to play -working in that field to earn a living- until eventually, he made the welcome discovery that full-time commitment to his passion for art was in fact a viable career choice.

Although Manzo has been developing his technique and exploring portraiture for about 15 years now, -he “will never stop exploring portraiture”, as he ensures us- he has been working on other subjects and areas that interest him, “I´m a pragmatic artist, I´m always curios of finding new ways in trying to make sense of my reality” he states. Manzo’s brush with architecture inadvertently yielded his unusual choice of materials -resin panels designed for use as interior wall treatments, as well as metal panels (copper, aluminum, stain-less steel), synthetic paper, fabrics, resin, etc; and also traditional materials like paper and canvas and metals like bronze, copper and aluminum he uses in sculpture-. He likes to play with different techniques and art types, to make them work together like edging, screen-printing, oil painting, image transfers, stitching, ceramics a sculpture, video and art installation, etc. He produces an assemblage of multidisciplinary techniques that transcend typical visuals trying to find new ways of visual deciphering.

On his bi-dimensional work, for instance, he manipulates the panels, sanding and preparing them to accept transfer images as well as paint, and adding layers of silk and other fabrics. He has experimented with all these materials, eventually hitting on a combination that allows a light-infused and reflective surface to mitigate the dark imagery. In most of these works, Manzo places the figures in the foreground with rarely a sense of an environment. Thus, the viewer is forced to focus on the Cubistic fragmented visages and figures that are painted with an expressionistic fervor. The surfaces of these oil paintings range from thick impasto to thin washes with areas of the background is left bare. This treatment adds to the sensation of his subjects being flayed to reveal their innermost feelings, the artist has great freedom to “let the painting develop by itself,” he explains. Because of the slow drying of the oil medium, Manzo works on as many as five paintings at the same time.

Currently the artist is exploring sculpture installations and art-object works, with specialized help on mechatronics and biology engineering, he is using bio-technical instruments and equipment to give life to what could be considered intelligent art installations: micro cameras, sensors, fiber optic lighting, electro-valves, precision air and hydraulics pumps, -and computer programs that act as the brains-, work in unison to conjugate an organic yet artificial conceptual art piece. In these developing works Manzo is exploring the mystery of organic life and our relationship with it. He uses precision programmable pumps that pulsate out streams of liquids like oils and purified water through flexible tubes visually imitating communication between organs and elements, air pumps to imitate pulsations, recorded sound effects, etc. then he interprets these apparatuses as complex artificial yet organic lifeforms that remind us of our own fragile organic bodies and of our dependence on organic life, “in our society we tend to forget our dependence on organic life, we seem to become more synthetic or artificial as our technology and development advances, we forget how fragile we are.”

In “Cardiograma I”, for example -which he presented in Territorios de la Memoria at Museo de Arte Moderno, Mexico City, 2019-, he used a large white multiply wood cabinet on wheels where he installed horizontally, on the front face, an opaque 5-foot resin human humerus bone-shape protruding relief. Along and half of the bone and in the lower part of it, he painted the inside of the bone in red to make it look as if it was half-filled with liquid. Then under this contrasting line, he drilled one-inch-apart holes from which transparent and flexible dangling tubes come in and out in which a red liquid circulates hanging to the bottom of the cabinet; right above this line he also hand-engraved a panoramic sketch of a city; this landscape was drawn based on typical rebar structures used in common buildings in Mexico. “Cardiograma I “detects the number of people in front of it through a video camera lens and a sensor installed right above the bone, it will get relaxed or stressed out, decreasing or increasing respectively the speed of the liquid according to the number of people in front of it, a series of audio loops will get activated as well playing sounds taken from a typical city either relaxed or disturbed depending on the stress level of the device. “My intention with “Cardiograma I” was to convey the viewer to a research laboratory, as if he or she was a scientist in front of a measuring devise, where the city, can be studied, analyzed, felt, thought throughout, to instigate discussions on what part we, as individuals and society, play within this organism, so to me blood and one of our bones had to be represented in this project.”

The artist freely admits his imagery skirts the macabre. While we might be shocked or disturbed by the work, the balance between horror and beauty seduces us in, like a spine-tingling movie giving us goose bumps that are somehow, ultimately pleasurable. Manzo also has a deeper message underlying the work, drawing attention to the death and injustice surrounding us in the world -things which many of us often prefer to ignore-. In addition, his work reminds us of our shared mortality and fragility.

Rogelio tells us he finds inspiration in the work of artists and is influenced by all sorts of art from many cultures, but that his Mexican heritage has imbued in him a strong desire to create work that looks “hand-made” yet refined. “I’ve seen a lot of work out there that looks so perfectly done, so clean, it looks like a machine did it… but for me, I almost have to have my hand print embossed on it with a cautious manufacture.”

Manzo’s work is shown throughout USA, Mexico and Europe, at solo and group shows in commercial galleries, international art fairs and museums, most notably at The Museum of Modern Art in Mexico City. And his work has been included in important private collections throughout like The Karen and Robert Duncan Art Collection and of El Museo de La Cancilleria, Mexico City.

“I’m interested in chaos, accident and the harmony and beauty found within. In my work I provoke the accident to later, during the creative process, embrace it looking for reconciliation and homeostasis. I force in the problem to then rebuild within it. Is,during this forceful battle,where I find harmony andbeauty. My pragmatic approachhas allowed me to discover and merge different materials and techniques. I spent my childhood and younger years in Mexico, when I had the opportunity I visited artisans to their shops, andI traveled to some of Mexico’s major artcraftsproducers states like Jalisco, Michoacán, Oaxaca, and the central Mexican valley, there I visited several shops of recognized artisans, and was inspired by the richness of materials and variety of techniques, color and textures they fearlessly use, their passion to make their work look “hand-made”with much care to fine manufacture,has deeply influenced me on what an art piece should look like. Myprocess is relatively complex and it has taken me quite some time to be able to understand the materials I use, as I ́m always looking for new ways of incorporating new materials and technologiesin my work.”