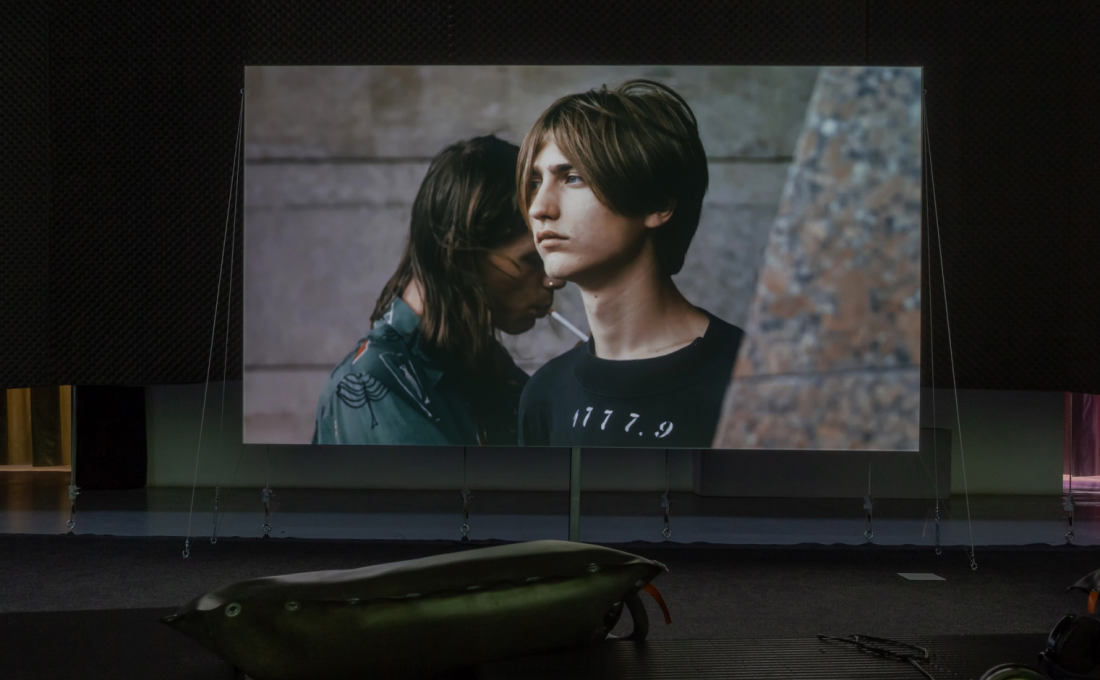 With Short Films on Ukrainian Youth Culture by Mathieu Grimard, Diana Gorban and Iryna Hromotska, Marina Roschina, Roman Khimei and Yarema Malashchuck we present six short films about the Ukrainian youth culture.
Yarema Malashchuk and Roman Khimey, artist and filmmakers from Kyiv might join us for a conversation after the film screenings.

Ian Golovin is preparing for a departure that was preceded by another: his father’s death. Now he believes he can finally become his true self. His longing for change drives him to leave the grey tower block estate where he lives in the Ukraine. But Masha, who is somehow always close by, asks the question: You think by changing the audience, we can change who we are?

After a failed party, the girl decides to tell about all the sore to a stranger in the park. In the conversation of girls, their vision of the world, a measure of dream and reality opens up.

Kate is a young lonely mother. She falls in love with a fellow but does not have the courage to tell him that she has a son. As their relationship develops rapidly the revelation becomes more complicated. The choice between her personal life and responsibility for her son arises.

The title of the film is taken from Leni’s Riefenstahl Olympia slogan which appears at the beginning of her documentary. Video-essay mix multiple narratives of 20th-century ideologies. Nazi central philosopher Alfred Rosenberg matches together with the icon of American democracy – poet Walt Whitman. Nietzsche follows the official soviet voiceover. The ideas of youth are wrapped into fashion brand style that mimics early soviet aesthetics.

Kyiv’s Youth Leaving a Grocery Store is an homage to the Lumiere brothers’ classic Workers leaving the Lumiere Factory. Reconsidering the world’s first cinematic works, the artists address the redefining of labour and change of socio-economic formation. Thus, a producing factory turns into a consuming factory, and leisure turns into exhausting toil on the dancefloor.

This film got an award at Grand Prix MUHi 2019, Kyiv, Ukraine for The best documentary short film at Festival Internacional de Cine Silente 2019, México and it also won the VISIO Young Talent Acquisition Prize, Florence, Italy.
The focus of the film is the techno-rave Cxema and the youth, on which the camera is carefully focused the next morning after the event. The space of Dovzhenko’s film-studio is transformed into a dancefloor, a synchronized crowd, spotlights, arrhythmic synthetic sound by Stanislav Tolkachev – the camera moves away and approaches, creating a sense of romantic exaltation and at the same time a modern alienation. This is the place and meeting that the youth of Kyiv are waiting for and preparing for – this particular escape from everyday life, rejection of it – evokes strange feelings of modern ritual. But what does it mean? The film ends with portraits, almost static shots, faces after utopia. Characters of the film are not ready to accept the new day and its old reality.

Other events from DAS ESSZIMMER – space for art+