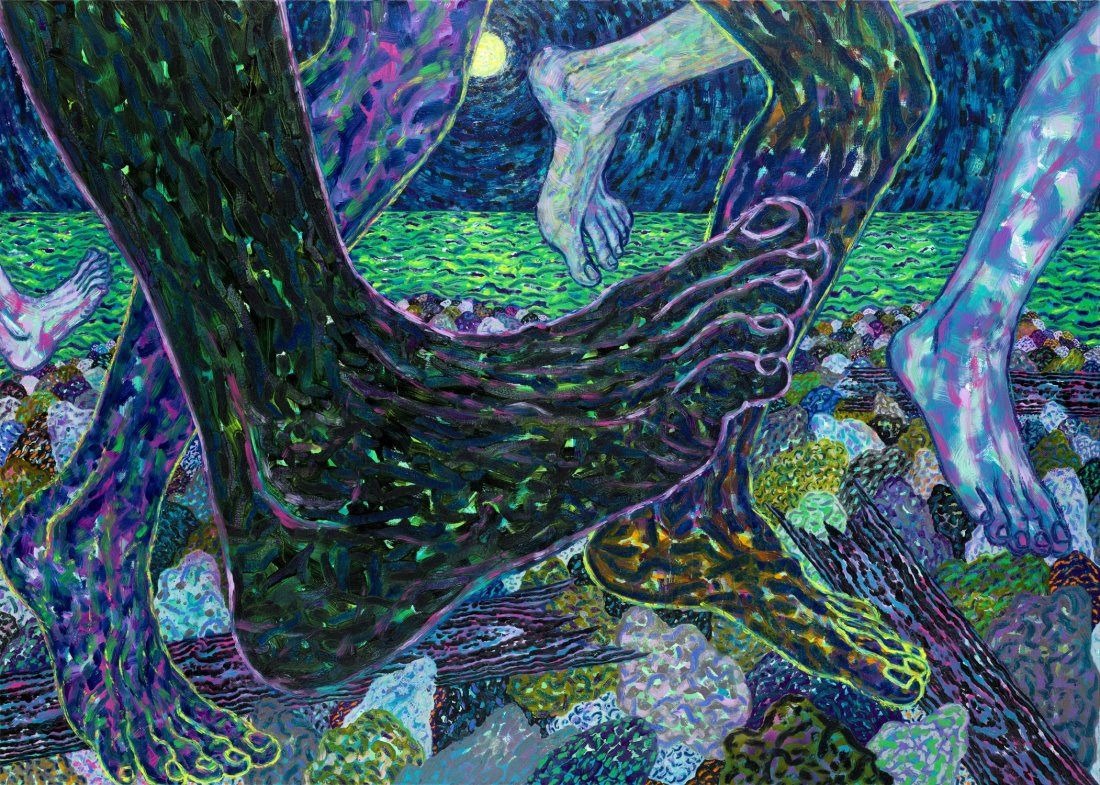 The exhibition is open to a fertile dialogue between paintings and drawings by Benjamin Degen (USA), sculptures by Paula Cortazar (Mexico) and Michele Mathison (South Africa), and the pictorial installations by Alexandra Karakashian (South Africa), to foster reflections and personal visions on what it means today to cross and explore different geographical and cultural territories.

The fil rouge of the exhibition are the works on paper and the paintings by Benjamin Degen: a path of geographical trespassing, of migration, in which the artist explores how the body moves in the landscape, and where the tension, the fatigue and uncertainty of the arrival appear clearly, as expressed in a rather hallucinated way, teetering between degeneration and redemption. The feet, the hands, the bodies transmit the swirling strength of a physical and psychic energy in movement: they walk, tread on earth and water, they rise to overcome walls and barriers. A universe in which Degen investigates and experiences the fluidity of the body and of the signs pushing to come out of the compressed space of the canvas. His painting is vibrant as the complexity of reality itself; the palette is apparently composed of anti-realistic colors, the sign is broken, marked, the lines are dashed, sometimes labyrinthine. The composition becomes a fluid space, a meta-cosmos in which overlapping elements, human and natural, are reflected in each other, generating undefined geographies of the image. In the works on paper, presented as chapters of his narration, a dried word is inscribed on, and becomes an open title of every station of an erratic journey.

The presence of the other artists on the theme of the journey, the path, the walking, punctuates and recalls multiple horizons of glance; it underlines what we have lost and what we have been able to preserve; it opens a reflection on different possibilities to make the world we live in, from which we come, and to which we will move, intelligible, and on our "being in the world".

Michele Mathison employs objects and hard and impregnable materials, such as granite, iron, steel, which he inscribes in his totemic, often organic, sculptures, by returning their own internal narrative. All these elements are related to a community deeply tied, in particular the tilling of “mother hearth”; a community as a living body, a center of concretely lived experiences, a direct expression of its identity.

Alexandra Karakashian, in the dark and lyrically mournful traces of her fallen flags / legs on pilgrimage, evokes the places from which one comes and to which one arrives; territories to be abandoned or preserved: suffering, exploited or raped, but which- in the ambivalent perspective of her work- give back to identity its dynamic character. The essentiality of her palette, the vibration of the sign on mouldable supports for painting, are centripetal elements for the gaze.

Paula Cortazar explores territories by observing how natural elements - like water, wind, weather, drought - create energy wrinkles in the places, and constantly modify them. The artist works on the energy present in nature and then encodes and engraves it on the surfaces of rocks, woods or paper. The sign, the imprint in her works often recalls the vital flows that run in our body, creating a bridge, a common language between human being and environment. The awareness of being part of the “whole”, bearers of the same energy, her works are works of hope reconciling us to accepting constant change.

​In all these works the artist’s sentient body becomes a conscious body embracing the earth over which it travels, in unison with it: one becomes matrix and nurturer of the other, along a path full of memories, disorientation, a sense of inner instability, risk-taking and utopian tension towards a possible sustainable future that bring and ideally reconnects us to it and to ourselves. Therefore, an exhibition on a social, cultural and existential journey, understood as a crossroads where the present of the passages blends with the past of remembrances, of memory and with the uncertainties of the near future. A journey that generates losses and regrets but also visions, expectations. A cartography of conscience, as well a cartography of places.