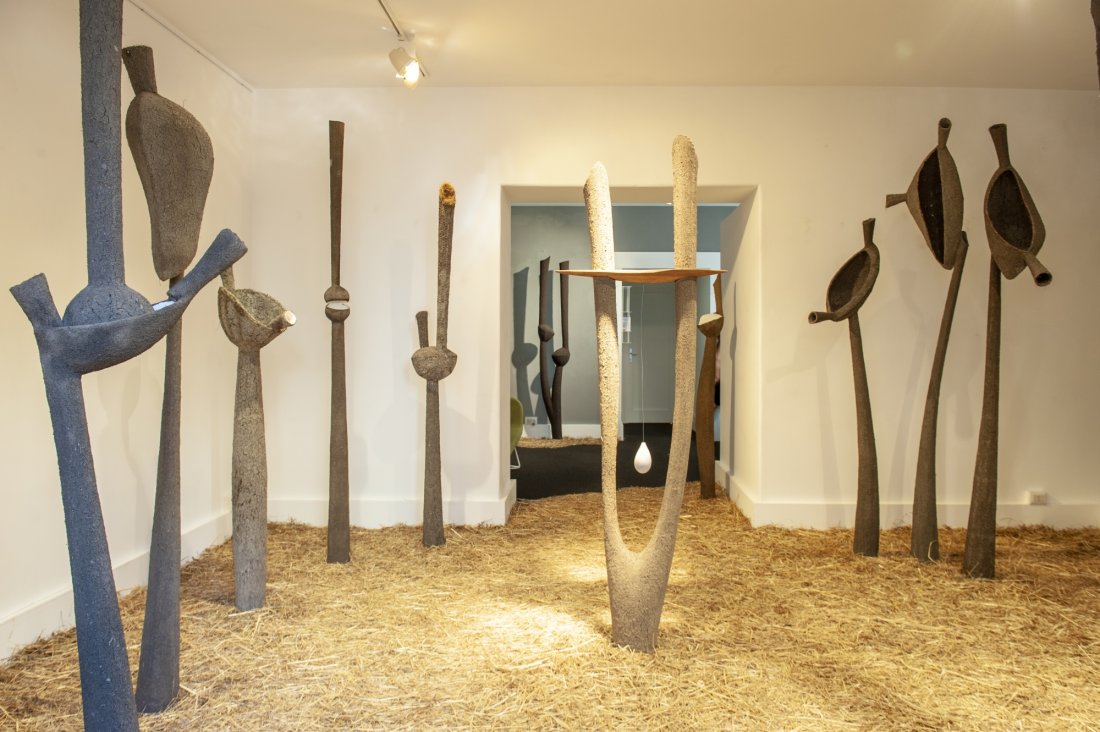 Sandro Scarmiglia’s sculptures, modelled through a material composition of mud and glue, stretched out in search of pure and essential forms in order to hear the echo of prehistoric civilizations. Since ancient times humanity has seen mud as a primordial element of life. Various indigenous traditions and minor religions, in which climatic factors and natural elements are object of worship such as holy beings or considered as their manifestation on earth, support the creation of man from the mud. The Christian religion itself, offers a starting point in this passage of the Genesis " the Lord God formed man from the dust of the ground, and breathed into his nostrils the breath of life; and the man became a living being" Genesis 1-5).

In this religious and spiritual perspective, mud reveals to be apparently fragile and inconsistent but hides within itself an immense vital energy. Moreover, considering that the virtue of humility, as the acceptance of our deepest truth, etymologically derives from the humus of the earth: "Do not hide the mud from which one has been moulded or rather, start from this to grow ...”

The emphasis of materiality of work has a strong link with tribal art, with which artworks are born by mixing heterogeneous and organic materials and are two components that we find on the contemporary art scene.

Picasso's use of materials is very similar to that of Sandro Scarmiglia: in the creative process, he used to extract the inherent principle in them and then use them for his own purposes. Later, this use of materials, both by the Surrealists and by the Dadaists, reflected a conscious desire to evoke primitive prototypes.

The same Scarmiglia’s art proves to have a close link with primordial art, a plastic construction that seeks an empathy from original forms. The modernist tendency to a stretched out figure and the familiarity with the proportions of tribal art, very close also to Giacometti, finds concrete expression with organic shapes whose main characteristic is that they are " never closed containers " that contain and, in the same way, expand a mysterious fluid.

These sculptures are also very close to David Smith, who combines, with his Tank Totem, the interest to a totem as primordial archetypal form and the treatment of the material with a view to creating an emblem. In Scarmiglia's work, the individual component is outdated in view of the relationship of coexistence, the sculptures are not seen as unique objects, but their being together creates a community.

The installation designed by the artist, emphasized by his experience of set designer, thus becomes the tool to change the habitat from time to time and create new dialogues between shapes.

Via Giuseppe Dezza 6b, Rome, Italy