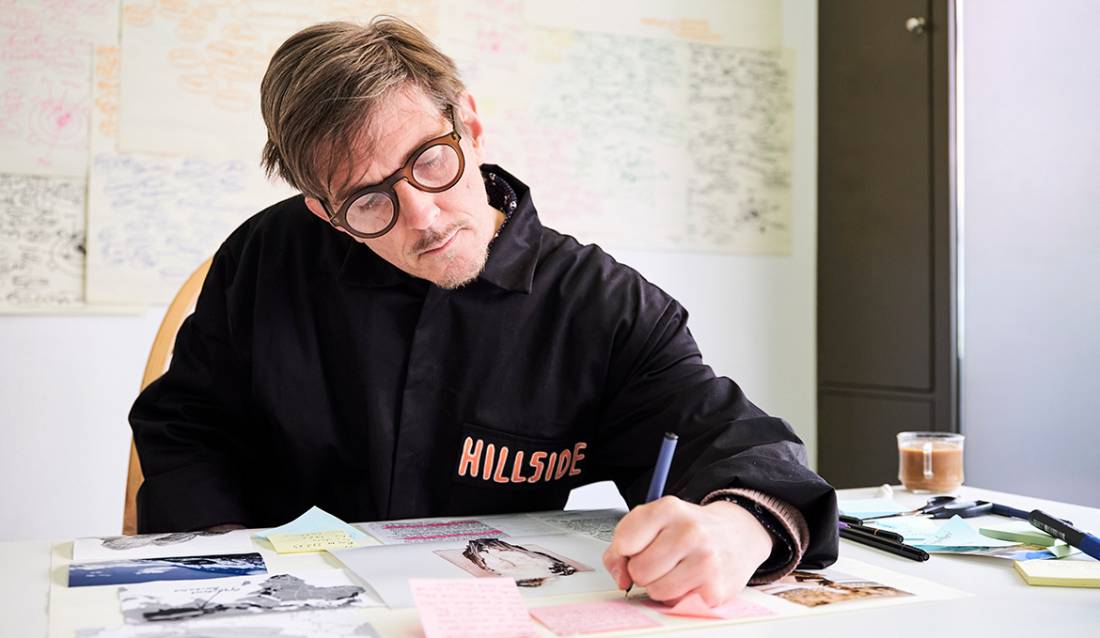 From the 29th of April to the 5th of June, SEA Foundation presents 'THEY WHO WERE' a solo exhibition by Hillside Projects (Emily Berry and Jonas Böttern), a Swedish artist duo. The exhibition deals with the intertwining of nature and man. More specifically it reflects on the extinction of fauna due to human activity and the consequences for man and his environment when species are deliberately or unconsciously eradicated. The exhibition consists of video work, collages, drawings and mind maps accompanied by performances.

Hillside Projects tells stories through performance, text and video. At the core of their artistic practice is an empathic approach to the animal in relation to the human. Recently, the artist duo has been focusing on species threatened with extinction and the consequences of this extinction for mankind. The artist duo endeavours to engage in a dialogue with their environment in an alternative way about the ever-increasing loss of various animal species through extinction. With their approach, the artists zoom in on man's actions and the unimagined consequences this can have on man himself, his environment and more specifically on interpersonal relationships. By embracing contrasts such as the tragic and the comic in their research, Hillside Projects highlights the cultural and political assumptions behind what is of value in nature and what is not, and how this affects us as humanity.

Who should be saved and why?

Who decides who should be saved?

Is it time to say goodbye?

Through an ongoing process of mind-mapping, performative gestures as well as the collection of found photographs and historical information THEY WHO WERE proceeds from the history of the vulture in India. Up until recently humans and vultures have lived in symbiosis in India. However, in the last few years, the vulture population has declined by 97-99% due to the use of diclofenac, a painkiller given to cattle. Ingested by the scavengers, the painkiller poisons the otherwise very hardy birds.

Vultures are often seen as unpleasant creatures. However, vultures do not deserve this bad reputation. They are at the top of the food chain as natural clean-up crew. Thanks to their diet of carcasses, they prevent the spread of diseases caused by decomposing dead animals.

Vultures are affected by poisoning not only in Asia but also in Northern Europe. The great consequences of the extinction of these scavengers for man and his environment is illustrated by Hillside Projects in THEY WHO WERE. To enter into dialogue with the public, Hillside projects use mind-mapping, the collection of photographs and historical information, and performances, among other things.

At SEA Foundation Hillside Projects trace the lives of seven vultures collected in the zoological archives at The Bombay Natural History Society in Bombay. In terms of species, the vultures studied are closely related to the Northern European vulture. Starting with the date and place where the individual birds were shot/found/collected, each bird’s history is mapped thus unraveling stories of a failed symbiosis, nature, and death as well the relationship between place, politics, and nationalism.

In conjunction with the exhibition at SEA Foundation, Hillside Projects have also developed a new performance The Scavenger Collapse. Through an oral narration by the artists, the viewers are guided by sound, mind-maps, and flow-charts as they learn about the many layers surrounding the vulture’s nearing extinction in India. The performance lasts approximately 15 minutes.

Hillside Projects will also be conducting a series of performances together with vultures in the zoological archives in König Museum, Bonn. This is arranged by Raum fur Kunst - Das Esszimmer as part of an exhibition in dialogue with the exhibition at SEA Foundation. These performances will be streamed live.

About Hillside Projects (Emily Berry Mennerdahl & Jonas Böttern) is a visual artist duo based in Stockholm, Sweden. Berry Mennerdahl received an MFA from Concordia University (2009) Montréal and a BA (hons) (2005) from Manchester School of Art, U.K. Böttern received an MFA from Konstfack - University of Arts, Crafts, and Design (2016), Stockholm. Hillside Projects has in recent years exhibited at institutions in all parts of the world and their films have been shown at international film festivals. The work of Hillside projects has previously been supported by The Swedish Arts Council, The Royal Art Academy Stockholm and Helge Ax:sson Johnsons Stiftelse.

THEY WHO WERE was realized with the generous support of Emil Bergs fond, Konstakademin Sweden and the municipality of Tilburg.

If you want to visit the exhibition or performance, please make a reservation by sending an e-mail to info@seafoundation.eu or calling +31(0)1354495.

SEA Foundation is an independent, artist-led, residency-based venue for contemporary art. To fulfil our mission; To create awareness for contemporary art and to build cultural resilience, we act as a catalyst in the working lives of artists. In all our activities we are fuelled by visual arts. Transgressing the boundaries between disciplines and always putting the context and the idea before the medium. Through exchanges and working in different cultural contexts SEA Foundation is part of international networks, where we generate and take part in discussions on eminent issues.

Other events from SEA Foundation