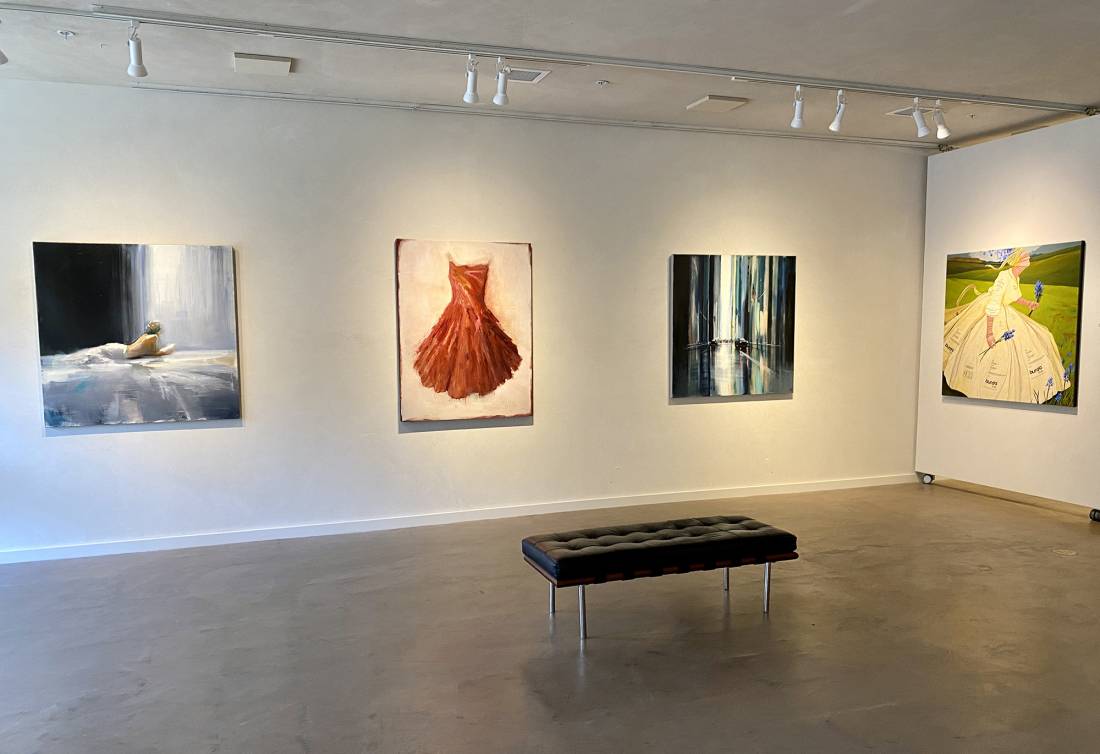 This fall Gilman Contemporary is featuring new work by four representational painters who each have a unique way of abstracting the recognizable. Laura Schiff Bean, Craig Mooney, John Westmark, and Jill Leareach bring a distinctive perspectives and materials to their canvases.

Craig Mooney is known for creating cinematic oil paintings that incorporate and manipulate light. In his figurative paintings, women are captured in moments of repose and are presented in an atmosphere often described as dreamlike. His cityscapes offer a glimpse of suspended time, both familiar and illusory. Regardless of the subject matter, Mooney’s brush strokes and color work create a viewpoint that transcends the subject, by nearly abstracting the familiar to create a dramatic perspective.

Laura Schiff Bean’s dramatic dress portraits stem from her interest in the human psyche along with her fascination with dresses. Each are characterized by the absence of a physical body making each work anonymous but with its own personality. With dripping, generous paint the dress becomes inhabited by an unseen presence that reflects on identity and gender.

The female figures in John Westmark’s paintings are composed of store-bought sewing patterns and acrylic paint on canvas. The patterns are used to create dimension in each form. By changing the text within the sewing pattern, Westmark carefully considers the narrative he is telling, allowing the viewer to read the surface of the painting and create their own context. The women inhabiting the paintings are often forces of nature, furthering the notions of challenging sociopolitical issues and gender.

Jill Lear transcribes the experience of being in, and thinking about Nature, through her studies of trees. Exploring them topographically. Thinking about them philosophically. Lastly, painting them systematically. There is an inherent restraint in her work that demonstrates her honor of these trees. She distills the elements that make up these ancient beings until the white space invites as much investigation as her color and lines. It is the process of this investigation that the viewer realizes they are participating in the very experience that Lear set out to create; the experience of exploration and discovery.

Other events from Gilman Contemporary