THE OCCASIONNALE | Zero Gravity: A Landing 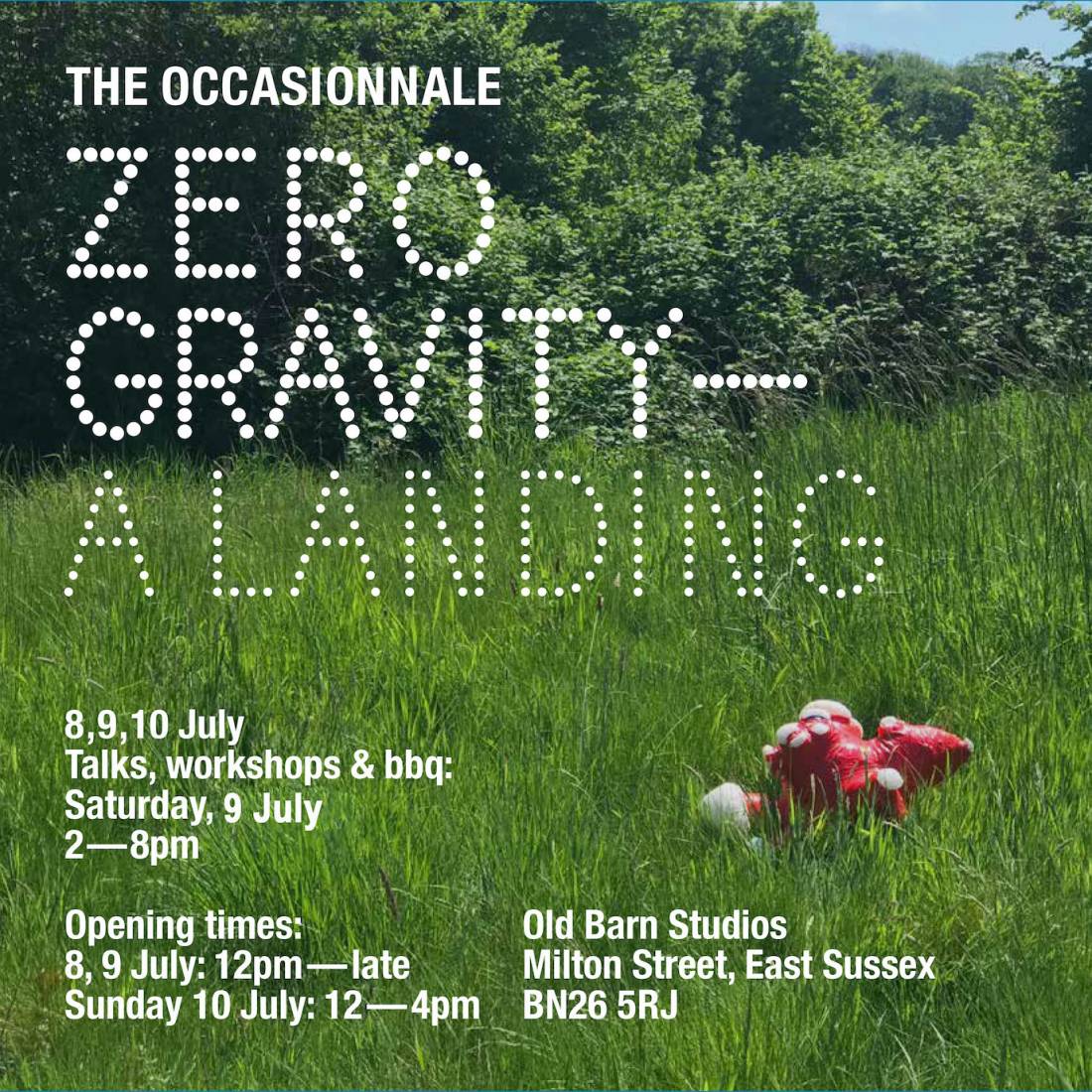 An exhibition like no other, ZERO GRAVITY: A LANDING is the second in THE OCCASIONNALE programme to take place at MC3 Projects in East Sussex. The site-responsive event will take place at the stunning Old Barn Studios, situated between Lewes and Eastbourne. The exhibition and sculpture trail spans the studio space buildings and the expansive rural grounds encouraging new forms of artistic engagement outside of the UK’s major cities.

Bringing together a collection of noteworthy artists working across sculpture, performance and film, the event hopes to combine spectacle with community, and critical thinking with open discourse. The sculptural works, most made in response to the location, will take up residence for the weekend in the beautiful grounds, bringing intrigue and unexpected encounters to rural spaces. Film work will also be screened, creating new connections between natural landscapes and technical forms of production.

Thematically, in the words of curators Jaime Marie Davis and Sarah Pager, the collection of works explores the notion of “our co-dependent living arrangement with gravity”. Entitled ZERO GRAVITY: A LANDING, the sculptural works on show resist grounding forces through their very making and various installation systems, becoming a conspiratorial assembly. They probe at the boundaries’ nature leads us to assume, allowing artwork to challenge what is known and accepted. The film work, often thought as free of materiality, asks what pull gravity might have within our imagination. As these interactions coalesce, they manifest tethered formulations and structures within which we exist.

The overall event is subversively titled THE OCCASIONNALE, drawing on the legacy of global visual arts festivals, while also implying something intrinsically different. The event will bring a relaxed and casual tone of genuine enjoyment, rural revelry, and collectivity. THE OCCASIONNALE invites art lovers to step outside the M25 and find a distinctive, exemplary, and ground-breaking selection of artworks across film and sculpture, while enjoying the overall festivities in a beautiful setting. The spectacular site is shrouded in art historical significance – it holds a noteworthy connection to The Bloomsbury Group. Their stunning murals in Berwick church are a mere 20-minute walk away. The MC3 Project space is currently developing an ongoing programme with THE OCCASIONNALE as its unmissable pillar event.

Artwork will be on show by Clare Burnett, London based artist and former president of the British Sculpture Society. Her work is a process-led response to the issues, objects and spaces around her created with scavenged goods from her surroundings. Solo and group shows include the Royal Academy, the National Gallery, the Jerwood Space, and the Royal Society of Sculptors in the UK along with multiple international exhibitions. She has completed site-specific installations in spaces such as Le Corbusier’s Unite d’Habitation in France and Brompton and Norwood Cemeteries and Bishopsgate Square in London.

Lana Locke who was nominated as BBC maker of the year in 2021 and works across a range of media including installation, painting, sculpture, video and performance. She is interested in the idea of the 'feral' - between the wild and the civilised – and how it feeds into social, material and feminist concerns. She has exhibited widely in the UK and abroad including at The Freud Museum, Chelsea College of Arts, the ICA, The Victoria and Albert Museum, and The Royal Academy. Mark Woods, a British artist with a background in contemporary jewellery production and in boat building, he produces highly elaborate artefacts that blur the boundaries between jewellery, fine art, fetish objects and items from a cabinet of curiosities.

Dori Deng, a Chinese-British artist working with projected light in site-responsive manner, informed by architecture and time. She is currently working on an opera in France for 2023, and will present a collaboration with Laurence Crane, composer of contemporary classical music and professor at the Guildhall Music School located in the Barbican. Judith Alder, who works across drawing, film, sculpture and installation and is “interested in how things grow and change over time and how science, nature and technology collide in today's world.”  Hermione Allsopp, who creates sculptural work by collecting objects and furniture and re-creating them into new forms or compositions.  Through her work, she intends to raise questions about the value and material, and potential meanings of everyday objects.

Lucy Brown, who has exhibited extensively and developed several education projects for arts organisations, schools, colleges and universities. Her work was included in the 16th International Lodz Tapestry Triennial in Poland, 2019; 6th Riga International Textile and Fibre Art Triennial in Latvia, and is held in public collections including The Lodz Central Museum of Textiles, Poland, The Whitworth Manchester UK and Nottingham City Museums & Galleries UK.

Work will also be exhibited by John Wood & Paul Harrison, a humorous duo who began working together after meeting at art school and “make works that form a kind of reference manual for how to do, make, build, or draw things that you probably never want to do, make, build, or draw.” Rebecca Scott who has work in private and public collections nationally and internationally and has exhibited in London, Cumbria, Spain, France, Germany, Sweden and Norway. In 2019, she was a finalist for Cumbria Life’s Visual Artist of the Year award and is also the Co-Founder of independent art space Cross Lane Projects in Kendal.

Liz Elton’s work begins in landscape and still-life painting, moving into the expanded field to explore the potential of waste and the recycling of matter.  Much of her work is made using food waste recycling bags as a ground (themselves made from crops such as corn or potatoes), coloured with water colours, water miscible oils and vegetable dyes from kitchen waste, sewn together with silk and often embedded with seeds.  Light and floating as the air moves around it, the work may mimic a tide going in and out as people walk past or appear to breathe in the wake of a breeze or air conditioning.  The material is designed with the intention to disappear, embracing its own ephemerality and demise.

The recipient of a Mark Rothko Memorial Trust Artist in Residence Award, Daugavpils, Latvia, Liz has been shortlisted for the John Moores Painting Prize three times, was awarded special commendation in Dentons Art Prize 2018 and Second Prize in the Sustainability Art Prize 2020.  Her installations, paintings, prints and photographs have been shown widely, and are included in UK and international private collections.