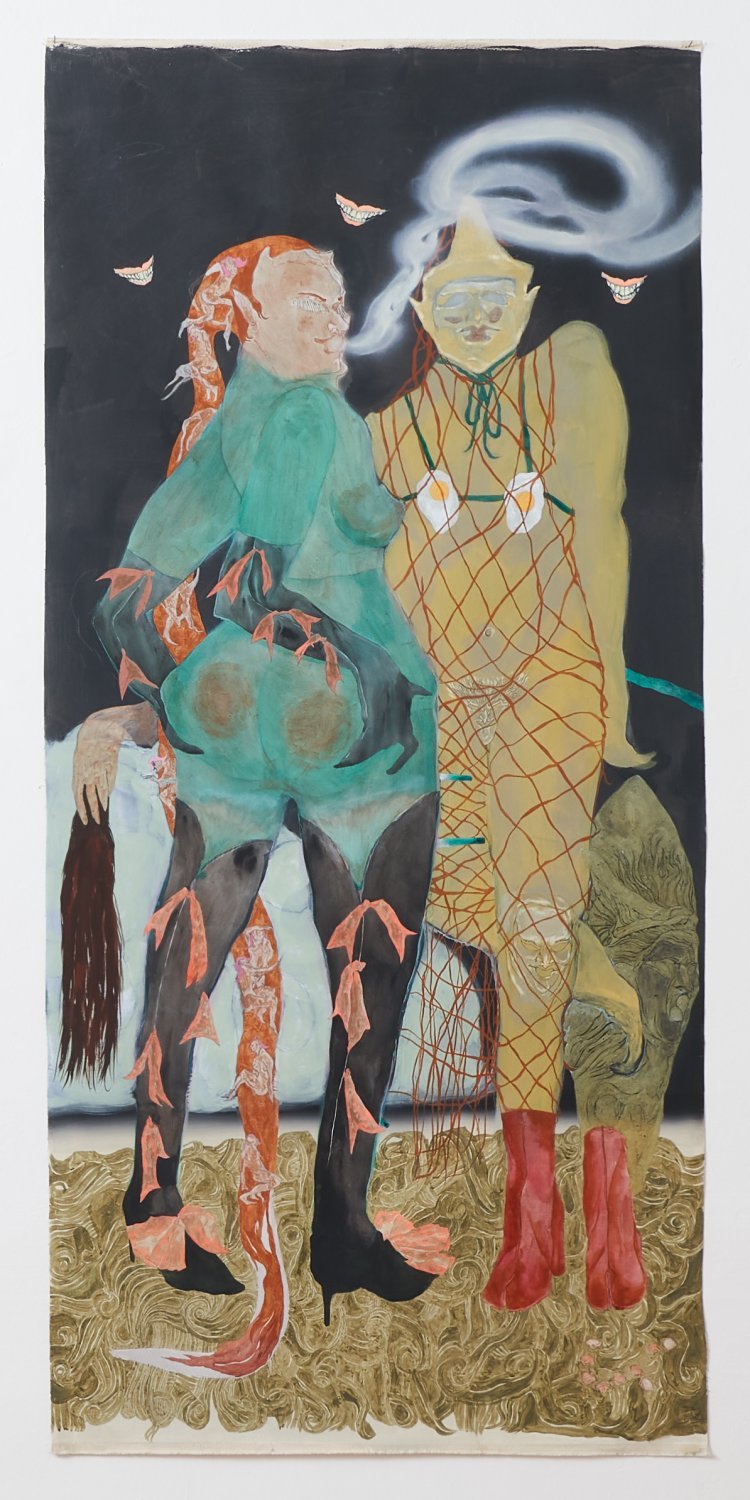 The Glasgow School of Art graduate, has already gained widespread recognition and had works shown at EMBASSY in Edinburgh, Christie’s in London, and in the 2019 Great Women Artist’s residency at Palazzo Monti in Brescia, Italy.

The new body of work, produced in 2019 and 2020, draws on a collected archive of varied imagery, and explores notions of stage, spectacle, desire and design. The exhibition will include both large and small-scale works, as well as a series of banner-style canvases and a fresco-like site-specific mural.

Inspired by medieval narrative and iconography, Walker’s works explore myth making through costume and role-play. The artist interweaves imagined narratives with reconstructed scenes from medieval and early modern paintings, along with other mediated and found imagery, moving freely between historical and contemporary sources. She collapses subject, object, time and place into dramatic and resplendent images.

Walker is interested in performative spaces, both public and private, and her compositions look to rituals of procession and pilgrimage and yet are alive with a rich and hedonistic carnival atmosphere. Walker’s paintings recast female subjects from both literary and art historical sources into new environments, and given both agency and power in the reclamation of their stories. Harnessing the viewer’s gaze, Walker’s protagonists are in turn confrontational, seductive and playful.

Walker explores lust and longing through the duality of her compositions. Referencing a wide range of sources, including Comedia dell’arte and Chaucer’s The Wife of Bath, Walker explores unrequited love as well as passion and play. Her masked figures are illusive and alluring at once, and represent a number of allegorical roles. Walker invites her viewer to enter a series of twisted and transfigured narratives that, although related to her own associations about history and society, are left open to interpretation.

Stating the works are ‘lyrical in their creation’, Walker works intuitively, building her paintings through layers of thin brushstrokes and repeated marks to create a textured surface. Formal devices in the paintings, including translucent curtains and veils of smoke, disrupt the narrative of her work, while pattern and colour further disrupt and complicate the structure and storytelling of her work. Bodies overlap, writhe and contort themselves within the shallow space of the pictorial frame, their highly ornamented figures shifting and stirring within their stage-like setting.

Ella Walker is a London-based artist known for her large-format works, rich in narrative and colour. Born in Manchester in 1993, Walker gained her BA hons in Fine Art, Painting and Printmaking at Glasgow School of Art in 2015. In 2018, she completed the Drawing Year Postgraduate Programme at the Royal Drawing School (London, UK). Walker’s practice combines painting, drawing and fresco, utilising various media including tempera, gesso, pastel and ink. She has recently shown her work at Huxley-Parlour gallery (London, UK); Christies (London UK); and EMBASSY (Edinburgh, UK). In 2019 Walker was awarded a six-week residency at Palazzo Monti in Brescia, Italy, as part of The Great Women Artist’s Residency hosted by Katy Hessel and Edoardo Monti.

Huxley-Parlour Gallery, located in Mayfair, London, was founded in 2010. Formerly Beetles+Huxley the gallery developed over eight years into one of London’s leading photographic galleries. In late 2018, the gallery expanded both its exhibition space and its curatorial approach to incorporate other mediums into its exhibition programme. The gallery is now dedicated to presenting a dynamic programme of contemporary and modern photography and painting and sculpture from the 20th and 21st centuries. Currently representing over 20 artists and estates the gallery is committed to creating a welcoming, educational environment founded on industry leading expertise, considered curation, integrity and innovation. Huxley-Parlour Gallery is a member of The Society of London Art Dealers (SLAD) and the Association of International Photography Dealers (AIPAD).