MUSEUM OF SEX OBJECTS EXHIBITS AT THE HORSE HOSPITAL 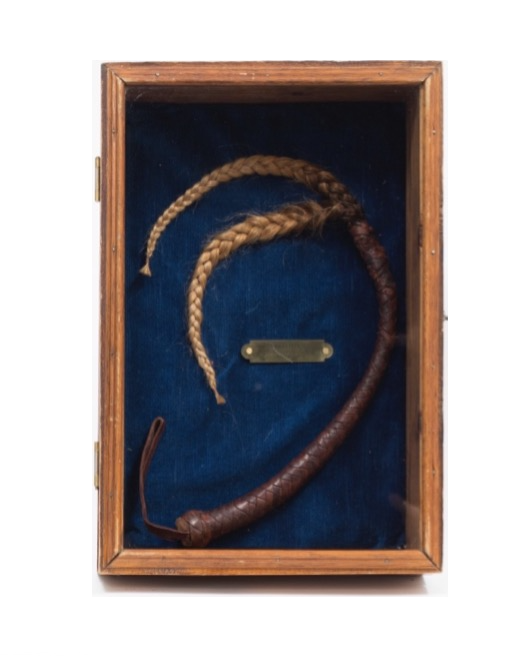 Objects such as the Meretrix whip, the only item said to be assembled by the original keeper, Lady Sexburga, Queen of Kent, 699, trace the power dynamics around sexuality from the Roman period onwards. Roman prostitutes, known as meretrices, were required to dye their hair blonde and register under a permit in order to work. The Romans had more than 100 different recipes for bleaching or dying hair. Some favourite infusions contain ingredients such as saffron berries, vinegar and crushed nutshells, while others used harsh bleaching agents. The dye often caused hair loss, and in some cases, women resorted to wearing wigs made from the hair of blonde slaves. In this way, blonde hair became a symbol of sexual availability and domination by acquiring blonde slaves and their commodified hair. It remains a potent symbol a millennium later.

Also on show is the Wall of Sexual Heroes, a collective textile art piece featuring decorated handkerchiefs which celebrate underrepresented historical and contemporary heroes of sexual emancipation, activism and innovation. With information and anecdotes shared by academics, curators, creatives and activists, this wall reflects the history of sexual movements, legislations, objects and individuals who have influenced our current sexual freedoms artistically, personally, politically and professionally. As an organic piece, it will continue to be contributed to throughout the exhibition and beyond.

The Museum is entrusted to The Keeper and her proxies, sworn to protect these objects and the stories they preserve for generations to come. The current Keeper, Deborah Sim, states:

’Charting sexuality’s cultural origins is not easy, with clues often locked away in old documents or institutions, their truth deemed too subversive at the time. The Museum of Sex Objects’ mission is to bring history’s blind spots into the light.’

As part of that mission, The Keeper will be holding daily tours of the Museum’s realms. Also throughout September, The Museum of Sex Objects is hosting talks with authorities on sexual history on subjects ranging from the link between witchcraft and the early LGBTQ+ community, the feminist appeal of Japanese rope art, Soho’s under-the-counter book trade, sacred rites for medieval sex workers and legendary Leatherman Tom of Finland, to how one fetish pioneer went from running a No Cameras, word-of-mouth underground club scene to designing historically pertinent rubberwear for inclusion in a prestigious art collection.