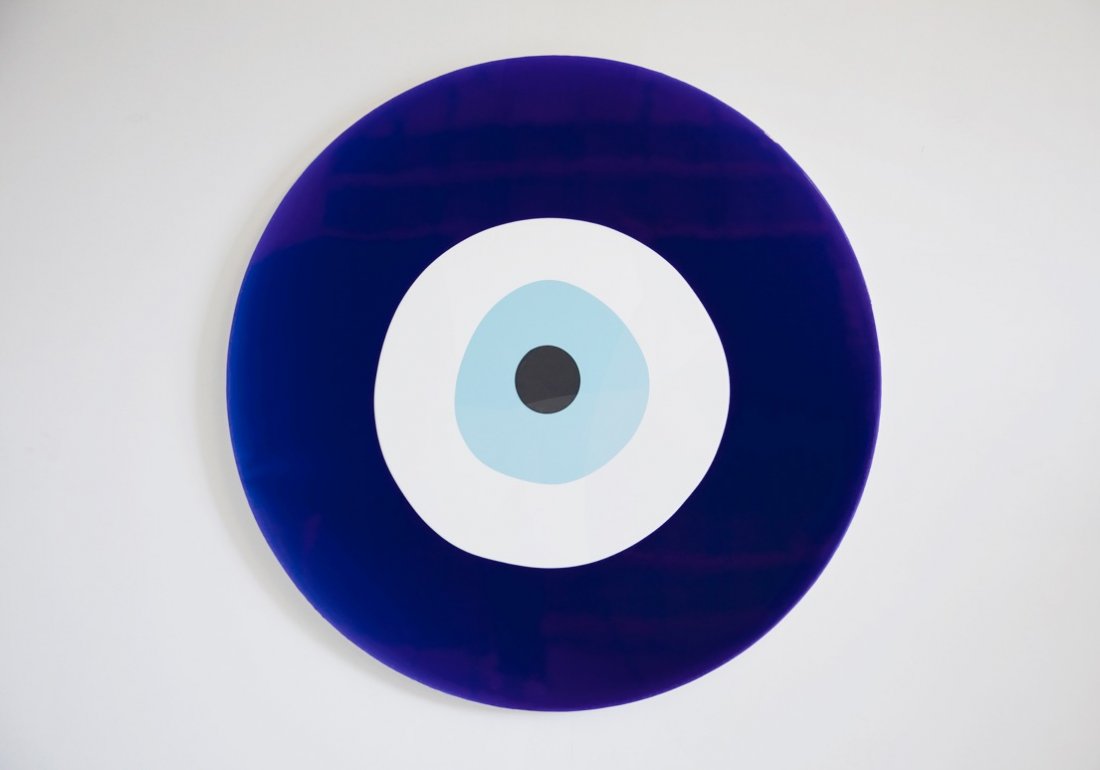 Le Dame Art Gallery is pleased to present New York / Rome Minimalism/Arte Povera curated by Lorenzo Belenguer. It is an invitation to explore the strong links between Rome and New York in the 60s as a starting point, how they influenced each other and how prevalent they are today in Contemporary Art. The influential YBA, Gavin Turk, leads a selection of six artists  from Britain, Israel, Spain and Croatia to demonstrate that both movements are still very current in art making today.

A minimalistic aesthetic has always fascinated artists. But it is in the 60s when a movement, Minimalism, was developed as a reaction to the Abstract Expressionism in vogue in those years. Around the same time, the term Arte Povera was coined by the art critic Germano Celant, literally meaning “poor art”, because of its use of everyday or “poor” materials. It also  started as a reaction to abstract painting. However the production process is very different in both movements. Minimalism favours industrial manufacturing while Arte Povera  assembles daily objects, both following a rigorous intellectual process and aiming for a basic, and perhaps spiritual, presentation of ideas.

Contemporary Minimalism is a fusion of many movements. Nowadays artists feel free from the corset of manifestos from the last century and pick and choose as they wish. A selection of six artists demonstrates that Minimalism can also be presented as art in movement, or kinetically, in the contribution of Gavin Turk; as photojournalism of an island destroyed after the recent war in the Balkans; as Surrealism with basic colouring. Or just as an artwork where the terms Minimalism and Arte Povera can be interchanged.

Belenguer, the curator and one of the exhibiting artists, says: “The 60s produced some of the most innovative movements in Art History and I find Minimalism and Arte Povera rather unique. Based in two different cities in two different continents, a strong dialogue between both took place. I would like to present this show as a starting point of future projects with works by Serra, Judd, Flavin, Pistoletto, Andre, Penone, Merz, Kounellis, etc, shown alongside contemporary artists such as the ones introduced in this exhibition. A dialogue in the making.”

Cristina Cellini Antonini, co-director with Chiara Canal of Le Dame gallery, adds: “As someone born in Rome, I have always been aware of the strong dialogue between Rome and New York since many Italians emigrated there in the 50s and 60s. I am pleased that the movements originated in that decade, Arte Povera and Minimalism, are still very influential in today's artists. Artists of the calibre of Gavin Turk will exhibit alongside a very interesting roster of up and coming artists and we are proud to facilitate this project.”

Gavin Turk is a British born, international artist. He has pioneered many forms of contemporary British sculpture now taken for granted, including the painted bronze, the waxwork, the recycled art-historical icon and the use of rubbish in art. Turk’s installations and sculptures deal with issues of authorship, authenticity and identity. Concerned with the ‘myth’ of the artist and the ‘authorship’ of a work, Turk’s engagement with this modernist, avant-garde debate stretches back to the ready-mades of Marcel Duchamp. In 1991, the Royal College of Art refused Turk a degree on the basis that his final show, ‘Cave’, consisted of a whitewashed studio space containing only a blue heritage plaque commemorating his presence ‘Gavin Turk worked here 1989-91'. Instantly gaining notoriety through this installation, Turk was spotted by Charles Saatchi and has since been exhibited by many major galleries and museums throughout the world. Turk has recently been commissioned to make several public sculptures including Nail, a 12-meter sculpture at One New Change, next to St Paul’s cathedral, London, England. In 2013 Prestel published Turk’s first major monograph, showcasing more than two decades of his work and in 2014 Trolley Books published ‘This Is Not A Book About Gavin Turk’ which playfully explores themes associated with the artist’s work via thirty notable contributors.

Ayelet Amrani Navon is an artist living and working in Israel. Her practice includes painting and sculpture. She disassembles pianos and collects discarded objects from local industry and nature and often uses gesso, a traditional primer, in unconventional ways in her art. Amrani Navon graduated with top honours from Basis Art School in 2011 and from the post graduate program at Basis Art School in 2012. Since then she has had two solo exhibitions and has exhibited in Israel and internationally, including venues in London and Paris. Her work can be found in private collections in Israel. Lingus White Is a wall mounted installation comprised of slender tongue shaped appendages. The disembodied tongues take on a surreal nature. Clusters of of white protruding tips allude to the possibility of people attached to them, behind the wall, beyond the gallery space. A tactile organ rich in taste buds and nerve endings, a tongue is also an intimate point of contact between human bodies. The installation is made of gesso: an inexpensive, modest material always found in the studio but usually under the paint. It is an understated medium, plain, white and meditative.

Vanya Balogh is a photographer, artist and independent curator born in Zagreb, Croatia. He currently lives and works between cities of London, Berlin and Venice. He has studied at Central St Martins and Regents College Of Psychotherapy and Counselling. His artistic output is diverse and multifaceted. He equally explores different mediums from painting, film, performance to photography, sculpture and site specific interventions. His photographic work is commercially acclaimed and he worked as a photographer and stylist with a cult street  style magazine I-D over a decade in the 90s, simultaneously curating sonic soundscapes for his underground electronic record label KILLOUT Recordings. His work has been widely published and exhibited in UK and internationally including Victoria & Albert Museum, Tate Modern, Venice Biennale several times and Loop Barcelona amongst many others. His curation, which is integral part of his creative output is defined by high intensity, large scale events which are designed for alternative spaces, instigating autonomous temporal zones for emerging and established artists to experiment and observe the disputed realm between business, commerce and art. Most notably recent series of group exhibitions in West End Car Parks and on the small scale, apartment project VROOM, which inhabits artists living rooms have both gathered much attention. His annual artist led curatorial project BIG DEAL, established in 2008 and built to last during the recession and economic downturn is entering its 9th anniversary and has featured some 400 international artists so far. He has work in private collections and is currently planning a major solo show with several book volumes due for launch  in 2016.

Lorenzo Belenguer's work straddles the realms of sculpture, painting and drawing. In one area of his practice, he transforms metal objects into sculptures that evolve from the visual rhetoric of Minimalism and double as ‘canvases’. Spanish artist based in London highly influenced by Minimalism and Arte Povera. Lorenzo Belenguer was one of the two performers invited by Leah Capaldi to perform ‘Hung’ at the Serpentine Gallery. Tate Liverpool as part of the Keywords project. ‘No Soul for Sale’ at the Tate Modern and many other exhibitions mainly held in London. Last year, Belenguer exhibited alongside 56th Venice Biennale

Cedric Christie lives in East London and is a visiting professor at Bath Spa University. After completing an apprenticeship in welding, Cedric used his knowledge of metal to make sculptures, first exhibiting in 1994. Christie is known for his Pink Painting, 2009, a crushed and wall mounted car, one of 12 cars in which Christie had travelled between Basel, dOCUMENTA and Skulptur Projekte with friends Gavin Turk, Richard Strange, Simon Liddiment and Paul Tucker. His signature artworks, noted for their use of steel, scaffolding tube, snooker balls, cars, chalk lines, graphic text and commercial fabrication processes, have resulted in a string of solo shows and public art commissions both in the UK and internationally, in Brussels, Antwerp and New York. In 2011 Cedric Christie exhibited Color Movement at Flowers Gallery, New York, in which he drew inspiration from dance - in particular George Balanchine’s ballet, Agon (1957). He has curated exhibitions such as: Line & Value: Part One, UpDown Gallery, Ramsgate, 2014, and Something I Don’t Do, Flowers Gallery, London 2009. His work is to be found in many collections including the Art Gallery of Nova Scotia; the Zabludowicz Collection; Unilever, London; Derwent Valley Holdings plc, London; Brown Rudnick Freed and Gesmer, London; and Land Securities, London.

Eva Raboso is self-taught in painting, drawing and would capture on any surface everything that comes out of her imagination, but her curiosity has led her to create a unique and original artistic movement, the Vertical Urban. Canvases with black matte background, dozens of layers of color glossy acrylic forming buildings, cars, apparently simple lines, a point of infinite flight and different axes, equal to-none contiguo- form sets that come alive only by a simple gesture: place an object in front of the box. Any camera or mobile phone makes 'magic' to focus their creations. And also in this style based on observation, the Valencian artist uses the brush to express  Bad Dreams, a neo-expressionist abstract collection, with which he tries to escape the perfectionist mechanics of straight lines that are trapped for weeks when developing series Urban. But his art also involves experimentation street. Eva creates sculptures on car roofs in scrap yards, ship decks or simple pieces of metal, where toy cars, their 'toys', and acrylic colors brighten scenarios in gray top, industrial cutting. These creations, sometimes ephemeral, especially when plasma on concrete blocks on the street, they become immortal when frozen in the photographs Eva soulful.

Mon to Fri 10am to 6pm – Saturday from 12 noon to 6pm. Sunday by appointment only