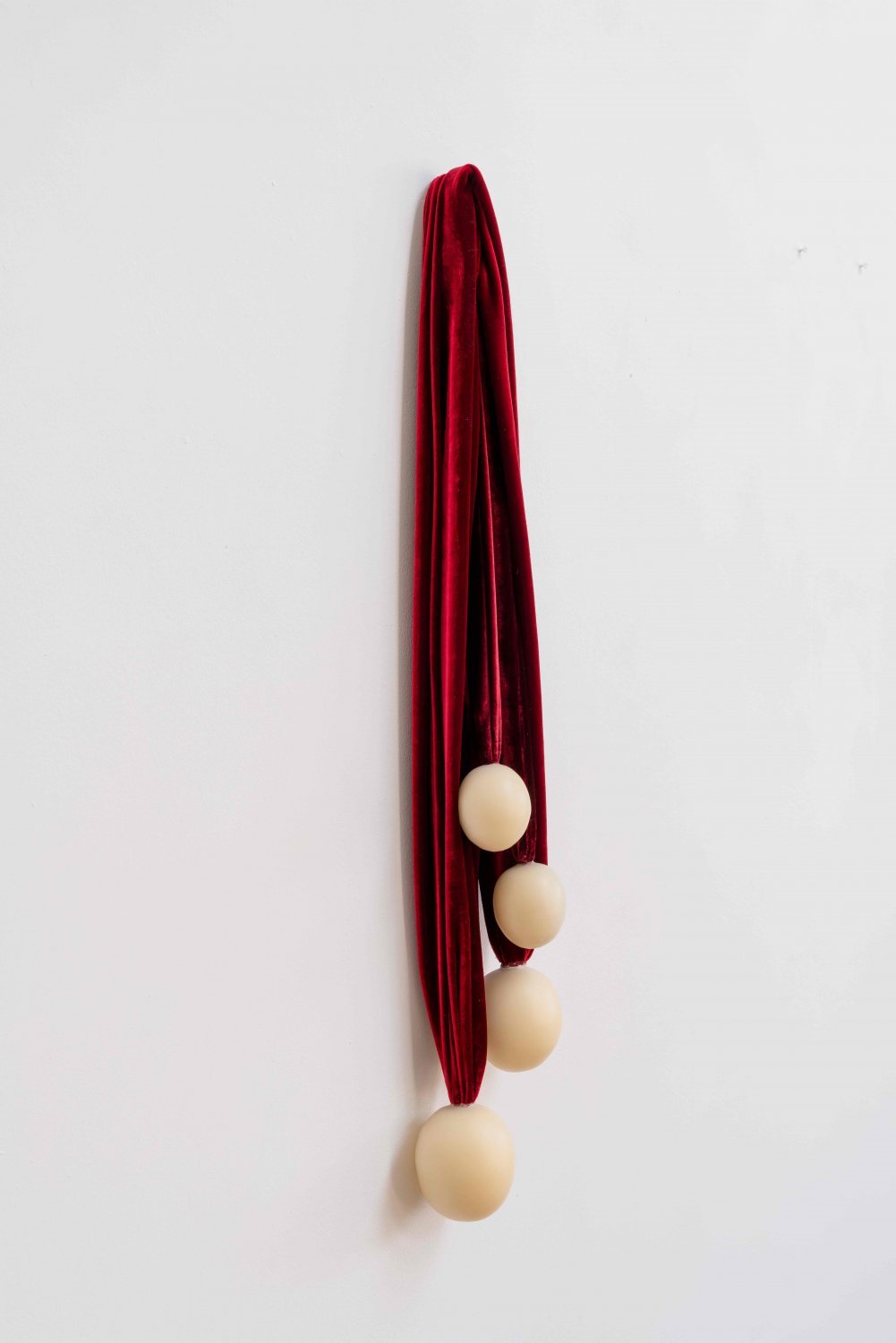 A new body of works from sculptor Susie MacMurray opens in October 2020 at Pangolin London.

Murmur is a compelling collection of striking, tactile and thought-provoking sculptures and installations, alongside intricate drawings, and new bronze and silver works created in a first-time collaboration with foundry Pangolin Editions.

Delicate, sensuous velvet contrasts with rusty barbed wire often reclaimed from battlefields or training grounds; soft round droplets of white wax are painstakingly placed at the ends of sleek lengths of black wire - there is no hierarchy of material in MacMurray’s work, rather a refreshing transformation.

The title work, Murmur, is an ambitious installation made of ostrich feathers whose tips have been dipped in wax and hang on tiny sharp fish hooks and piano wire. It will cover the entire length of the gallery swirling and changing direction like an avian murmuration, like a flock of birds being freed. Opposing characteristics play off one another: large scale yet meticulously detailed; tactile yet fragile, a contradiction, yet the outcome makes perfect sense.

MacMurray’s work has always been a process of self-healing and a response to what is happening in her present. In the last few months of lockdown, strong feelings of being helpless and trapped have significantly influenced this new body of work.  Having been starved of physical human contact during lockdown, the artist has also been particularly drawn back towards velvet – an undeniably tactile and comforting material to work with.

MacMurray has gained a reputation for poetic site-specific interventions in historic spaces, where she merges the history with selected materials that relate in some way.

A startling new wall sculpture in the exhibition is inspired by Gathering, a significant public commission at Tatton Park Mansion in 2019, which showed a voluptuous piece combining red velvet elements and barbed wire pieces cascaded into the staircase hall. The work is inspired not only by the history and architecture of Tatton Park, but also the story of a wild costume ball held there in 1897, in which the hostess wore red velvet.

MacMurray’s method of making merges carefully selected evocative and emotionally dense materials. Whether working with hairnets, feathers, velvet, wax or barbed wire, the artist explores the vulnerability and resilience of humanity. The materials used are ephemeral in themselves, and she likens this to our own mortality and the transient nature of life.

Isolation has also meant that MacMurray has continued to explore the relationship between mothers and children - the joy and pride of letting children go and allowing them to take flight, and the desolation of being left behind. Soft and fulsome shapes are juxtaposed with sharp, jagged or rough forms making works that are beautiful but not entirely benign.  A recurring theme throughout the exhibition, this has fed into a fairy tale sense of magic whispers, passing on both tales of caution and wisdom. Through the artist’s hands and use of materials, MacMurray wants to capture and encourage in the viewer a child-like sense of wonder at ‘our amazing yet terrifying world’.

In Foundling, MacMurray carefully slices deer antlers into thin flake-like slivers, rendering them almost unrecognizable and inviting the viewer to look afresh. Once majestic on the head of a deer for protection, showing strength and virility, they become delicate and exposed.

A powerful portrait Medusa, which drew much attention at the entrance of Masterpiece London last year, will also be on display on the Pangolin London Sculpture Trail at Kings Place during the exhibition. Constructed entirely by hand from almost 300kg of copper wire, Medusa is clad in chainmail. With her skirt of delicate articulated tentacles, she is both seductive and captive, tactile yet dangerous - her mail both ready for combat but also protecting a fragile interior, asking the question of the viewer of the role of women both in the past, in myth and in the present day. Much of MacMurray’s practice is concerned in one way or another with the perception and negotiation of female identity, both internal and external.

Creating Medusa was slow, labour intensive and repetitive, and MacMurray was aided by a small team of female art students. She compares this to an age-old tradition of women gathering together to spin and weave, sharing knowledge and wisdom as they work. The artist thinks of making art as ‘spinning straw into gold’.

A former classical musician and alchemist at heart, MacMurray has a talent for sensitively combining materials much as a conductor brings together an orchestra. She asks, ‘How can we be here, so strong, powerful, full of life and energy, so confident as a species and yet so desperately fragile?’

Drawing is an important part of MacMurray’s work, as a means of meditative practice and material examination. In addition to her large pen & ink work she also plays with watercolour and draws on a more intimate scale. Having started drawing as a very personal self-healing process, the first objects she responded to were torn pieces of net curtain – wounded, damaged, and coming apart at the seams. Over time, the works began to ‘take flight’ and became more about containing, vulnerability and safety.

The series of Gauze Bandage drawings in this exhibition reference dancing, wanting to fly and to be free, and accepting that things can be ragged – all the while capturing fragments of undiscovered beauty.

The artist’s musical background inevitably influences her work. She describes her creative process as being about ‘tuning’ an object, which ends up being a piece that couldn’t be any other way. She searches for a frisson between the tensions, rhythms, echoes and conversations between two materials. MacMurray’s experience as a professional musician and a member of the Halle Orchestra has given the artist an eye for materials such as horsehair from violins, sheet music, or piano wire, but also shown her the value of working collaboratively.

Collaborating for the first time with Pangolin Editions foundry has brought further diversity to MacMurray’s sculpture. Her new series of delicate carapaces first made in wax in her studio have been cast into bronze, with the smaller pieces transformed into sterling silver to create brooches.

Susie MacMurray is a British artist whose work includes drawing, sculpture and architectural installations. A former classical musician, she retrained as an artist, graduating with an MA in Fine Art in 2001. She lives in Manchester and has an international exhibition profile, showing regularly in the USA and Europe as well as the UK.

Known for her major installation pieces such as Shell, where 20,000 mussel shells each stuffed with a tuft of crimson, silk velvet filled the stairwell of Pallant House Gallery, Chichester, or Echo, a work made of hairnets and violin bow hair, which hung from the ceiling of St Mary’s Church in York, like droplets forming a cloud., MacMurray describes her creative process as a search for something she hasn’t seen or realised before. Finding that point where chaos and order are finally balanced, because that’s where energy is, where change happens and where anything is possible. Her practise is about trying to find those spaces in the cracks that are unexplored.

MacMurray has worked on a number of intricate garment sculptures, such as Widow (2009) - where she individually inserted 43kg of adamantine dressmaker pins painstakingly through a black leather skin forming a seductively glittering evening dress - on display at Manchester City Art Gallery, or her acclaimed wedding dress A Mixture of Frailties (2004), made from hundreds of rubber gloves turned inside out.