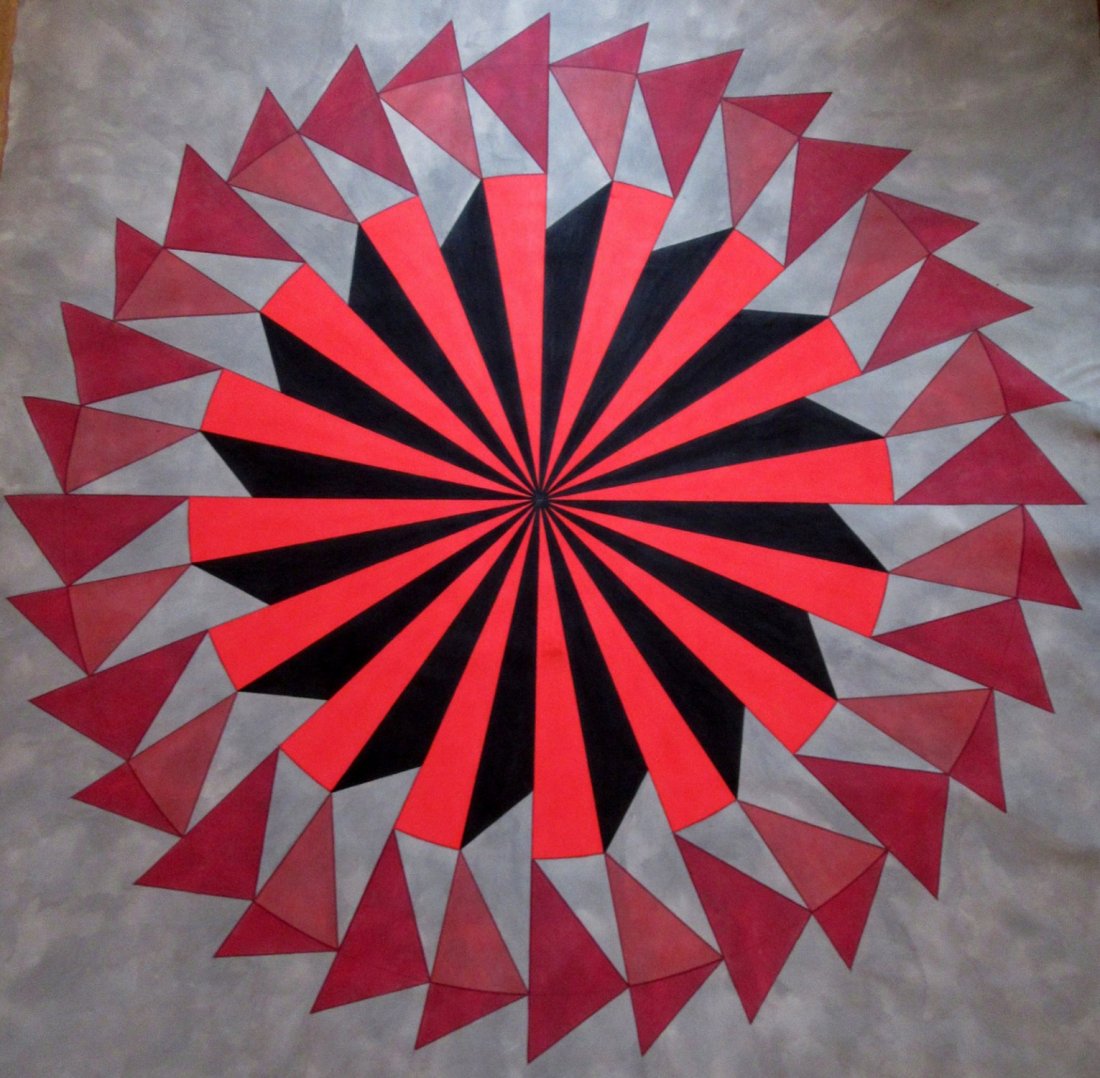 We are witnessing the most astounding change in ‘being human’ through cutting-edge astronomy and space exploration in the 21st century. ‘The Human Spaceship’ project employs visual art processes to examine these plans with the objective of creating an experimental installation of scale using extreme perspective, geometry, optical illusions and colour manipulation.

Helen Schell has developed an observational document which investigates vision and visual perception in altered gravity conditions (as in long term human spaceflight). During the Covid-19 lockdown, Schell has used this information to create an installation that is made up of many component parts using a variety of drawing and painting techniques. In ‘The Human Spaceship – Off Balance’, Schell uses multiple optical illusions, destabilising the spectator through images depicting visual vibration similar to space conditions, creating a sensation of being ‘off balance’.

The exhibition has been informed by a research trip to Houston, USA, in 2019. Schell was invited to be guest artist at Rice University, Texas, meeting with leading human spaceflight scientists at NASA’s Johnson Space Center (base for the Artemis Mission, that has the goal of landing the first female astronaut and next male astronaut on the Moon in 2024). This visit also included the Rice Space Institute, the Lunar and Interplanetary Institute, and Baylor Center for Space Medicine. A tour of the University of Houston’s Sasakawa International Center for Space Architecture (SICSA) department enabled a dialogue about innovative designs and new materials for habitations.

Helen Schell was born in the USA and lives in Sunderland, UK. After 12 years of art projects collaborating with space scientists from UK universities, in 2019 she won the European Space Agency’s international competition, 3D Printing on the Moon, in which she proposed a Moon garden design, printed from recycled coloured plastics. ‘Moon-shot: Woman on the Moon’ at Ely Cathedral won the International Astronomical Union 100 Moon Landing 50 Prize for Most Innovative Event, worldwide. In November 2019 she was the first artist to be presented with the Sir Arthur Clarke Award for Outreach for her contribution to space exploration.

Schell collaborates with scientists from The Institute for Computational Cosmology, Durham University, the Royal Holloway, University of London’s Department of Physics, the University of Kent’s School of Physical Sciences, and the International Space University. Currently, she’s working on a science funded solar physics project with Cambridge University, SunSpaceArt. Other projects involve the Science Museum, the Royal Astronomical Society, Institute of Physics, and large UK art and science institutions. She has participated in several international residencies in the USA, Canada, Cuba, Sweden, Belgium, Germany, Cyprus and The Netherlands, as well as many UK residencies.

The office is closed until October and we are working remotely. Please contact by email only.

Other events from Vane