Of Line and Form 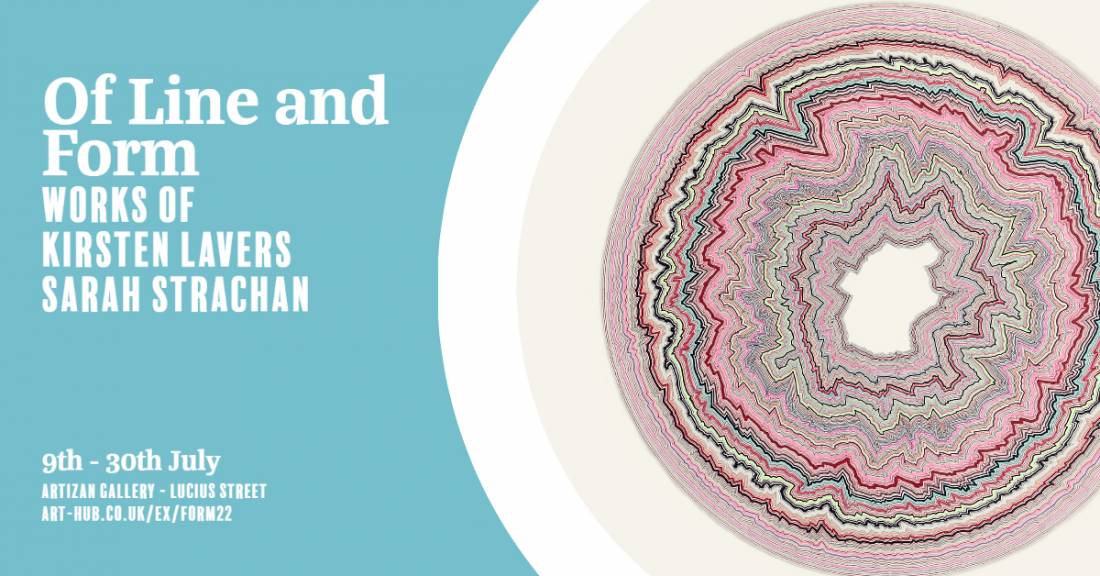 Although both based in Cambridgeshire this will be the first time that Kirsten Lavers and Sarah Strachan have exhibited together following an invitation from Artizan.

Sarah explores her ideas through printmaking, painting, and ceramics and is interested in how perception affects our ecological awareness and thinking. Working with clay (manufactured, recycled or wild) allows her to explore issues of materiality and sustainability.

Kirsten has been a professional artist since 1991 when she graduated from Dartington College of Art, Devon, with a first-class degree in Art and Social Contexts.

Admitting the Possibilities of Error is an ongoing series of conceptual drawings which she began in 2013, each of which marks a different circumstance or event - some quotidian - the happenstance of an accidental mark, the line produced by a particular pen, others momentous: turning sixty, a solar eclipse, the war in Ukraine.

Beginning with the outline of a circle, which she tries to copy perfectly, each forms a meditation on fallibility; ‘I am not perfect, my mind wanders, my hand wobbles, I make mistakes. In creating them I ‘admit errors’, giving my limitations latitude and celebrating the resulting patterns, recalling as they do fingerprints, tree rings or map contours. Rather than frustration realising them brings me focus, humility and comfort.’

In contemporary culture mistakes are largely regarded a source of shame to be compensated for erased and regretted. A less punitive approach - one that holds human error tenderly - allows instead for the idea that our failings can support growth, discovery, learning and change. Kirsten shares these drawings to open up conversations about mistakes, their impact upon us, upon others, upon the world.  ‘My wish is that they will act as a catalyst for conversation, reflection and hope’.

Kirsten Lavers has been a professional artist since 1991 when she graduated from Dartington College of Art, Devon, with a first-class degree in Art and Social Contexts.

She has subsequently been funded by bodies such as Arts Council England and the National Lottery, commissioned to make artworks by organisations such as ICA Manchester Festival and the ICA London and exhibited internationally in Chicago, New Zealand and Portugal.

Lavers is deeply interested in making artworks that infiltrate everyday life, provoke curiosity, inspire conversation, and challenge preconceptions about what an ‘art experience’ might be or mean. Rather than being medium led her arts practice takes a variety of social forms - manifesting as an event, performance, magazine, drawing, walk, or the formation of a community group.

She has often worked in collaboration with other artists - Zwillinge Project 1992-8 with performer Melanie Thompson and Things Not Worth Keeping - with writer Cris Cheek 1999-2006 as well with different communities and groups including homeless people.

Since 2013 Lavers has produced an ongoing series of meditative, conceptual drawings under the umbrella title of Admitting the Possibilities of Error. Each drawing begins with the perimeter line of a perfect circle and evolves from the repeated attempt to perfectly copy the preceding line. Often manifest as live actions - drawings may respond to different locations, world events or conversations.

As well as making artworks Lavers has also frequently curated exhibitions and from 2002-10 ran a gallery space, situated in a black London Taxicab parked in her front garden, hosting over fifty re-imaginings of its iconic space by artists, performers, poets and musicians from all over the world.

Sarah Strachan is an emerging artist based in Cambridge, UK. In her transdisciplinary practice she senses environmental changes through conversational drift with people, place, the land and the materials and objects associated with these.

Sarah explores her ideas through printmaking, painting, and ceramics and is interested in how perception affects our ecological awareness and thinking. Working with clay (manufactured, recycled or wild) allows her to explore issues of materiality and sustainability. She often fuses sound and/or moving image into final installations of her work as in Objects listening, which was recently exhibited at the British Ceramics, Biennial in Stoke-on-Trent.

Her work seeks to disrupt habitual perspectives through the liminality of the objects and spaces she creates. Collaboration is fundamental to her practice as an individual artist, working as artist duo ‘Itiswhatitis’ and as part of art, geology, and sound research collaborative Mud Collective.

Other events from Artizan Gallery