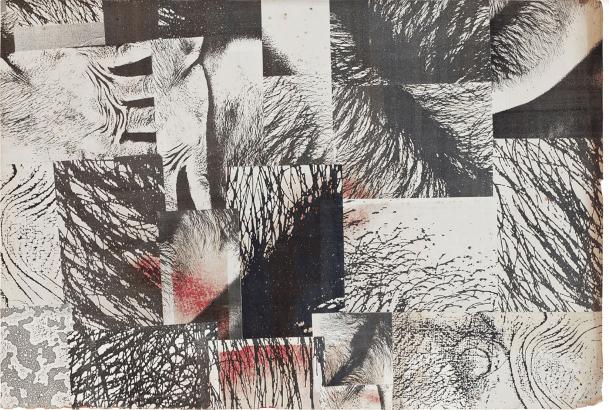 Kupfer is pleased to announce the exhibition Let X=X, featuring works by Brazilian artists Alair Gomes (1921-1992) and Hudinilson Jr. (1957-2013). Belonging to different generations, both artists produced groundbreaking and experimental works focusing on the male body during the repressive years of military dictatorship in Brazil. Gomes and Hudinilson’s pioneering approach to homoeroticism and queerness within the largely heteronormative context of 1970s and 1980s Brazil had a lasting influence on the country’s contemporary art scene.

Born on December 20, 1921 in Valença, Alair de Oliveira Gomes obtained a degree in civil engineering in 1944 at the University of Brazil, Rio de Janeiro. The following year, he was appointed an engineer at the Brazilian Railway Company. He founded the literary review, MAGOG, with José Francisco Coelho and a few other friends in 1946. The same year, he underwent a profound religious crisis.

In 1948, he abandoned his profession as an engineer to devote himself to the study of modern physics, mathematics, and biology. In 1961, he received a philosophy grant from the Guggenheim Memorial Foundation. He spent one year in the United States (1962-1963), where he was invited to teach at Yale University. From 1964 to 1976, he participated in numerous international conferences on the philosophy of science. He became a professor of Philosophy of Science at the Biophysics Institute of the Federal University in Rio de Janeiro and a professor of contemporary art at the School of Visual Arts (Brazilian Ministry of Culture), and then, an advisor at the National Institute of Visual Arts (National Foundation for the Arts, Rio de Janeiro). From 1977, Gomes became more active in the fields of art criticism and photography. Between 1976 and 1984, he exhibited his photographs in New York, Paris, Rio de Janeiro, and Toronto.

In 2001, the Fondation Cartier pour l’art contemporain organised a major monographic exhibition of Alair Gomes, which was accompanied by a comprehensive catalogue. Since then, his work has gradually achieved international attention, having featured in the 30th São Paulo Biennial, curated by Luis Pérez-Oramas (2012) and A New Sentimental Journey, Maison Européenne de la Photographie (Paris, 2009). His work is now part of important collections including Fondation Cartier (Paris), Loewe Foundation (Madrid), and the MoMA (New York, USA).

Addressing queer issues and sexuality, and the personal and political freedoms arising from the end of military rule in 1985, Hudinilson Jr formed a collection of collaged diaristic tomes, which are full of images collated from newspapers and magazines, photographs and letters and notes from friends. These books reveal that, despite an economy of means, Hudinilson Jr created a personal world which began with the politicized body. The ‘diaries’ juxtapose fragmentary imagery – monuments with youthful male bodies, casual notes and messages with self-portraits.