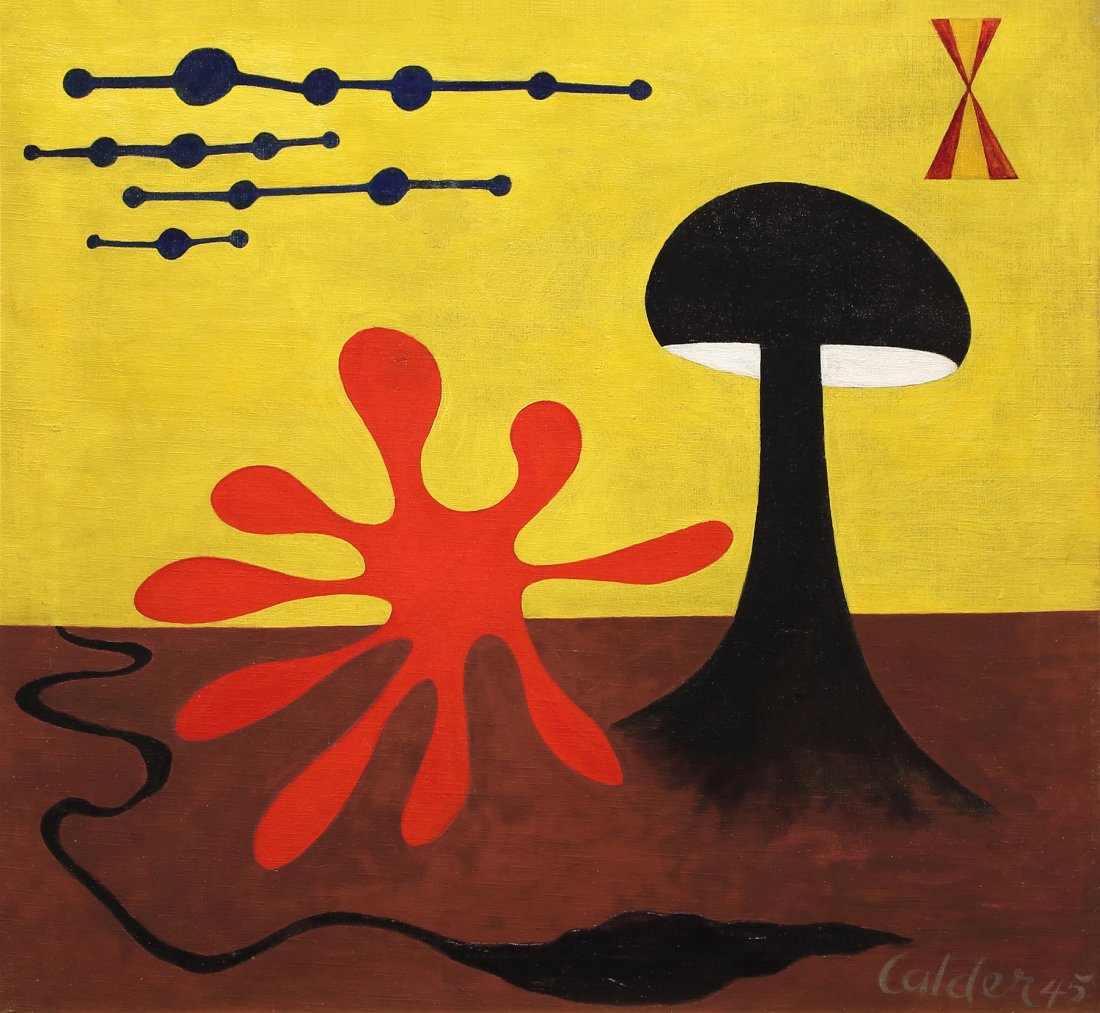 LOS ANGELES, CA — More than 100 works will be presented at Jack Rutberg Fine Arts in its new exhibition, “Surreal / Unreal” opening on November 5 with a reception from 4:00 p.m. to 7:00 p.m.

The exhibition of paintings, drawings, prints and sculpture from the 1930s to the present expands upon Surrealism — its early years through the present day, and how it informs much of contemporary art.

Having its origins in Europe, Surrealism soon had its international stylistic counterparts.  Particularly notable in this exhibition are a number of important American works, including Alexander Calder’s exceedingly rare 1945 painting on canvas.  A painting by Hans Burkhardt, “Voyage on the Metasola” from 1936, created the year before Burkhardt moved to Los Angeles, depicts a visionary escape to an invented planet.  Another painting by Burkhardt, “Day and Night” from 1937, represents one of the earliest major paintings created in full surrealist-bloom in Los Angeles.   Among other noteworthy works are two by Frederick Kann, whose impact was formidable by his championing of modern art and artists as wide-ranging as Man Ray, Eugene Berman, Harry Bertoia, Hans Burkhardt and others.  But Kann’s history in L.A. remains obscure as no critical examination of his contribution exists.  Sculptor/painter Claire Falkenstein is represented by two paintings on canvas from the early 1940s, when she was celebrated in San Francisco museum exhibitions.  Her early paintings anticipate the breakthroughs she was to affect in sculpture in her move to Paris in 1950, where she encountered many artists who were impacted by Surrealism and were a part of its progeny.

The exhibition features numerous original graphic works.  Notable is the complete series of Roberto Matta’s very first etchings, which remained unpublished for decades due to their provocative sexual nature.  Created in 1943 in S.W. Hayter’s studio, Atelier 17, at the New School for Social Research in New York, while both artists were escaping Paris during World War II, these ten etchings are shown in Los Angeles in their entirety for the very first time.  Work by Hayter from this period is also included in the exhibition.

Following the war, Surrealism liberated artists into realms of free expression internationally — in Europe, the U.S. and Asia, as exampled by the CoBrA movement (Copenhagen, Brussels, Amsterdam).  Among its best known members are Karel Appel and Pierre Alechinsky, included in “Surreal / Unreal”.   Also included and shown for the first time in Los Angeles is Oswaldo Vigas, the important Venezuelan painter who can be viewed in context to CoBrA, as can a rare sculpture by the notable contemporary Danish artist, Peter Linde Busk.

In Vienna, a simultaneous and more direct end of the surrealist spectrum was the “Fantastic Realism” movement, whose dream images were rooted in history, literature, social commentary and, above all, in fantasy.   Erich Brauer is represented in this exhibition with a seductive small painting, “Solomon”, in addition to his entire etched series, “From the Proverbs of Solomon”.  Works by Friedensreich Hundertwasser, early associated with “Fantastic Realism”, are also included in the exhibition.

Contemporary artists such as Ed Ruscha, George Condo, Llyn Foulkes, and Joel-Peter Witkin can be directly viewed through the lens of surrealism and are included in the exhibition, as are L.A. artists Marc Licari and Stas Orlovski, who were recently among only a few “young” contemporary artists as counterparts to the historic survey of surrealism of the 1930s and 40s at the Los Angeles County Museum of Art.  “Surreal / Unreal” bends the theme into the unreal, as Jerome Witkin’s painting for “9/11” bridges both surreal and the unreal, creating a compelling other-worldly scene.  Bruce Richards’ paintings echo history and art history making wry commentary in “Before and After”, where he conflates a performance by  Marina Abramovic and Magritte. Richards’ painting, “Saints and Strangers”, evokes both Magritte and American history in a manner that equally places Ruscha as Magritte’s acolyte.  The poetic mark-making of Irish painter Patrick Graham can be viewed through the surrealist lens, as time, space and concept take on ethereal planes.  In terms of ethereal space and process, Catalan artist Jordi Alcaraz extends these attributes in ways that have elicited critical praise, describing him as a visual alchemist among conceptual artists.