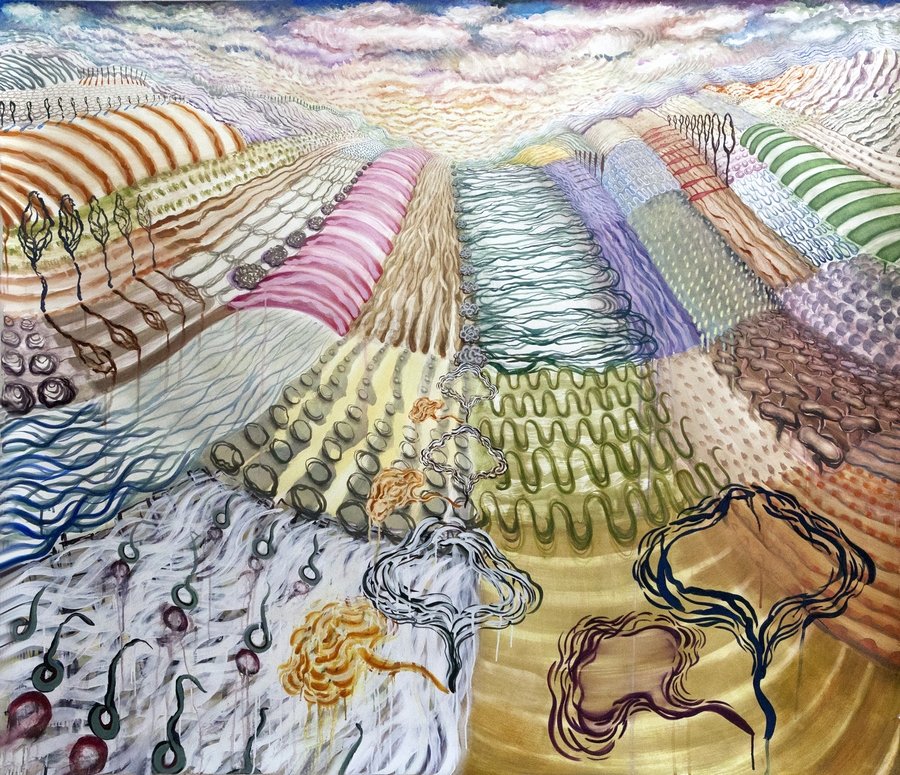 Littlejohn Contemporary is pleased to present a one-person exhibition of watercolor and gouache paintings Recurring Waves of Arrival, by Lily Prince. The exhibit will run from March 8 to April 21.  The title is from a line in a John Ashbery poem. Prince, whose process includes plein air oil pastel drawings and watercolor and gouache paintings, has an extensive exhibition and publication record. She has exhibited widely nationally and internationally and has had her work included in numerous publications and commissions.

The paintings in this exhibition, Lily’s first with the gallery, are all inspired by her repeated travels to Italy, where she returns to draw en plein air frequently. Her San Giovanni D’Asso series began in 2013 when she was staying for an extended time in a tiny Tuscan village, after completing an artist residency in southern Italy on the Adriatic Sea. Plein air drawing and painting is the basis for all of Lily’s work. Her love of nature and passion for the beauty of specific terrains inspire her studio work, which she does in an 1850s barn near the Catskill Mountains in New York’s Hudson Valley. This summer, Prince had another extended stay in Italy, this time overlooking Lake Como, where she began a second series of plein air paintings, for her larger studio works, inspired by the patterns and rhythms of that particular landscape.

Lily Prince has her B.F.A. from The Rhode Island School of Design, her M.F.A. from Bard College, attended Skowhegan and participated in The Bronx Museum's Art-in-the-Marketplace Program. Prince studied abroad on RISD’s European Honors Program in Rome and has lived and travelled all over Italy. Prince has been awarded commissions by numerous hotels and the New York City Department of Cultural Affairs and her work is in many private collections. Her book of portraits with writer Richard Klin’s profiles, Something to Say: Thoughts on Art and Politics in America, was published by Leapfrog Press, 2011. Prince’s 2nd book includes all of the illustrations for Abstract Expressionism for Beginners, published by For Beginners Books, August 2016.

Prince’s work has appeared in the New York Times, New York magazine, the Brooklyn Rail, the Newark Star-Ledger, New American Paintings, San Francisco Weekly, The Bloomsbury Review, Rain Taxi, On View magazine, Les Femmes Folles, Compass Cultura, and Crossborder. A catalogue of her drawings, The Ten Plagues, was published by The Paterson Museum. Lily has lectured at Yale, Vassar, Cornell, RISD, SVA, Pratt and at Artists Talk on Art and has been interviewed on WVKR, WBAI, WGXC and WAMC radio. She lives in NY and is an Associate Professor at William Paterson University.

These richly colored works speak of a bold mysticity, critic and poet David Shapiro has written about Prince’s work. But the balance and Eros of the work is strange and strongly painterly, and strong too its reliance on a devastating doubleness of vision. In Prince, one is observing both the pleasures of observation and a severe and principled devotion to abstraction.

Prince considers herself an explorer, studying the atmosphere of diverse spaces. Returning repeatedly to specific views, she combines illusionistic space with the interpretive mark-making inherent in the abstract ordering of the chaos of nature. While Prince’s paintings are rooted in her interpretation of one or two particular places, they combine the memory of past spaces with future aspiration. Lily’s initially observational works portray the pulsating rhythms and fecundity of both NY’s Hudson Valley and Tuscany’s Crete Senesi. Undulating hills, rippling fertile fields, echoing distant mountains and shifting skies, have a sense of movement that knock the viewer slightly off-balance. Prince’s watercolor and gouache paintings, which range in scale from small to quite large, give the viewer the sense of flying through them, hovering, as the earth shifts in subtle twists and turns.

These paintings represent Prince’s visceral connection to nature, to the energy emanating from an evocative terrain, and her constant longing to return to it anew, like recurring waves of arrival.

Lily Prince has her B.F.A. from The Rhode Island School of Design, her M.F.A. from Bard College and studied at Skowhegan. Lily participated in The Bronx Museum's Art-in-the-Marketplace Program and studied abroad on R.I.S.D.’s European Honors Program in Rome. Prince has exhibited widely both nationally and internationally, including in England, Germany, Israel, Poland, New York, Los Angeles, and San Francisco, among others. She has been awarded commissions by numerous hotels and the New York City Department of Cultural Affairs. Her book of portraits with writer Richard Klin’s profiles, Something To Say: Thoughts on Art and Politics in America, was published by Leapfrog Press, 2011. Prince was just commissioned to create 75 illustrations for the book Abstract Expressionism For Beginners, published by For Beginners Books, August 2016.

Lily Prince was one of only two international artists awarded a fully-funded residency at the BAU Institute in Italy, 2013. Prince’s solo show Here, There and Everywhere was at Vassar College, 2013; In 2014 her work was featured in numerous shows and publications including Force of Nature at SUNY Ulster’s Muroff-Kotler Gallery. She was chosen for Draftsmen’s Congress, a residency with international artists at New York’s The New Museum and had work in the Weatherspoon Museum’s Works on Paper Biennial. Her work traveled with Pierogi Gallery’s exhibition to Sorrento, Italy. She had a solo museum show Dream State in Naples, FL, 2016 and in 2017 joined Littlejohn Contemporary, NY, with whom she showed her work at Art On Paper.

Lily Prince’s work has appeared in the New York Times, New York magazine, The Brooklyn Rail, the Newark Star Ledger, New American Paintings, San Francisco Weekly, The Bloomsbury Review, Rain Taxi, Jewish Currents Magazine, Chronogram magazine, and the literary journal Crossborder. A catalogue of her drawings The Ten Plagues was published, with poems by David Shapiro, by The Paterson Museum. Prince has lectured widely, including at Yale, Vassar, Cornell, RISD’s European Honors Program, Pratt and at the Artists Talk on Art series. Prince was interviewed on WVKR radio for their cultural currents show as well as on WBAI and WAMC, among others. Lily Prince lives in NY and is an Associate Professor at William Paterson University.

Other events from Littlejohn Contemporary