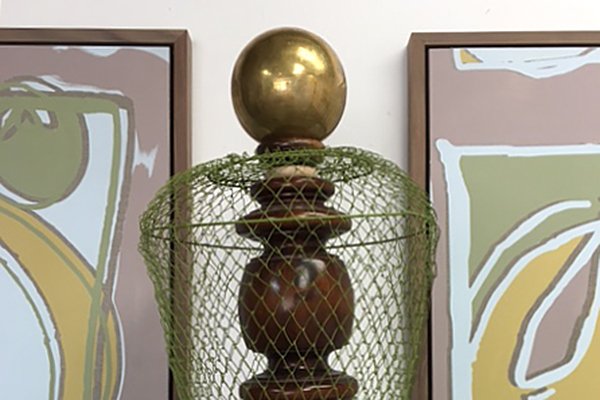 Near Positive is the New York debut for Los Angeles based artist, Jason Bailer Losh. Bringing

With an emphasis on balance and composition, the sculptures are comprised of ubiquitous

objects sourced by his father-in-law in North Carolina and sent to the artist in large parcels.

Removing himself from this initial selection process, Losh reworks and modifies these objects

to create new structures and configurations. Visibly influenced by modernist sculpture and

contemporary totems of homage and levity. Precariously perched atop both pedestal and riser,

they force viewers to approach the object at an uncanny angle, confronting the quandary of the

modernist monolith from its underbelly.

The series of paintings derive from one minute sketches on paper of the objects, a practical

exercise to understand the negative and positive spaces. Losh expands and multiplies his free-

hand line drawings onto linen canvases. These kinetic compositions merge the immediacy of

drawing with the familiarity of the silhouetted object’s drop-shadow. The warm colour palette is

inspired from antique tiles and executed in acrylic and also concrete stain, further uniting the

works to their sculptural counterparts.

The artist writes “Questions of positive and negative space, the re-imagining of the pedestal,

modernist histories, the domestic building and disused locations (from where my materials are

sourced), all of these elements are present in the finished works, pushing the work beyond