Shades of Blue: Drawings, Watercolors and Works on Paper 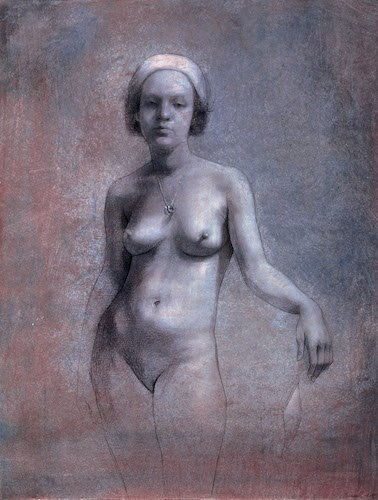 “Shades of Blue” is revival of a drawing show, titled (appropriately enough) “Blue Drawings” which was first exhibited at Portraits, Inc. in June 2015 at their New York City gallery. As do many exhibitions, the collective theme arose from observing ascending trends in practice --in this instance the use of blue toned paper, line and/or wash to heighten the expressive impact of drawing--- specifically in representational and figurative styles. Individually, the drawings chosen for the show referenced a diverse range of influences--from the balanced restraint of the neo-classical to a more experiential modernism. Once installed, the drawings coalesced into an expansive field of sea and sky, each work a distinct shade in an overarching expression of blue’s psychic depth and purity.

There is great diversity in the meaning of color and its associations within the culture in different time periods. The initial impulse to restage a blue drawing show was not without political consequence--as clearly a blue wave was washing over the country. That said, the color blue calls to mind a serene constancy and the humanist pursuit of order, as opposed to a discontented chase after serial enthusiasms. Under this tempered lens, blue symbolizes restoration, as opposed to radical change, with undercurrents of introspection leading up to expansive vistas of rarefied beauty.

With a renewed appreciation for the diversity in color symbolism as a context-dependent influencer, the exhibition title “Shades of Blue” was adopted to signal a broader range of media expressions and to acknowledge an ever-expanding association of individuals and cultural groupings within the blue color space.

Other events from Equity Gallery