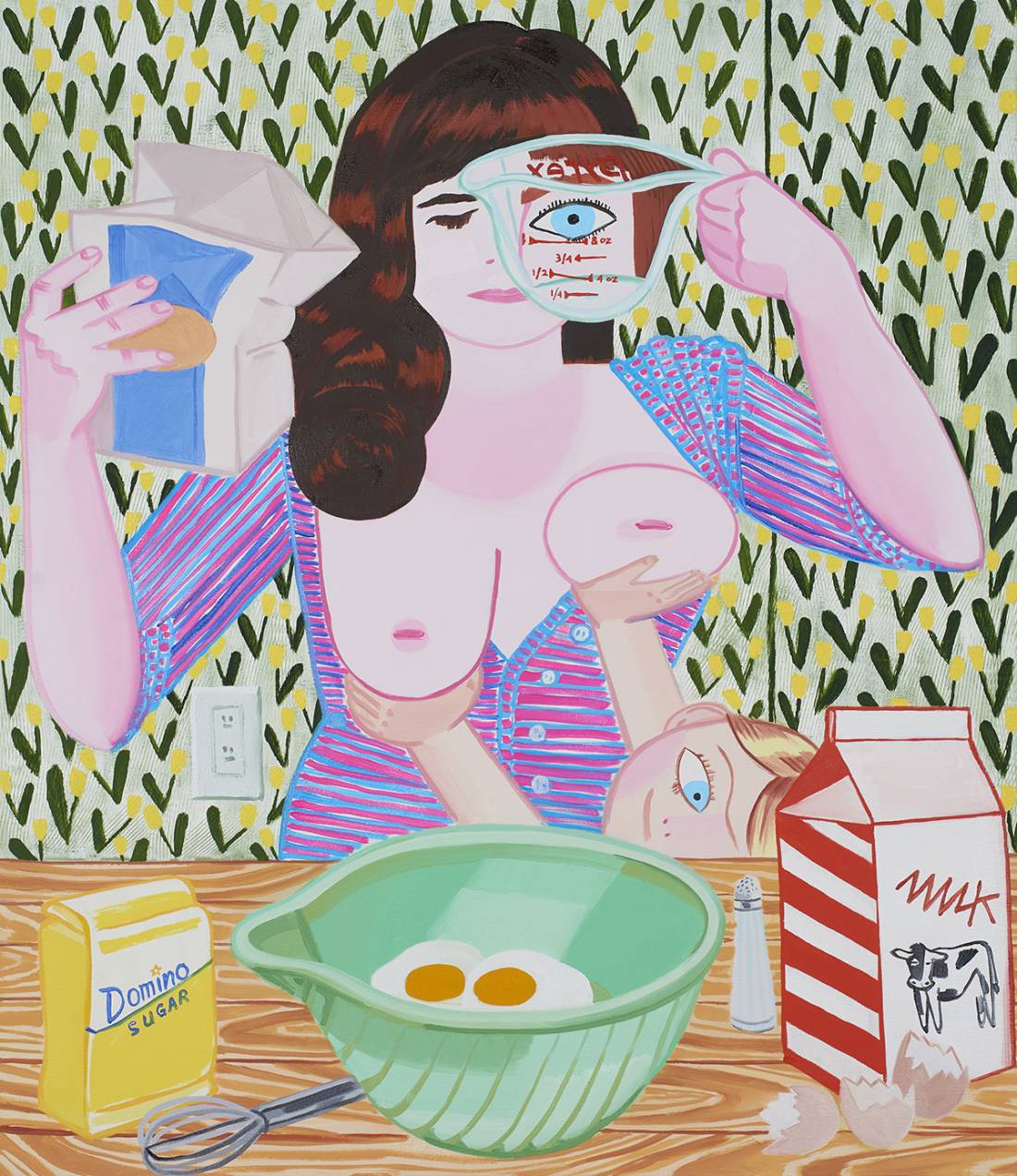 This year features work by Maria Calandra, Andrew Catanese, Madeline Donahue, Howard Fonda, Cathy Lu, Humbert Ramirez and Sheena Rose. The panorama of styles and subject matter portray components of our cultural landscape, exploring motherhood and identity, our relationships to nature and our bodies, experiences of immigration, cultural hybridity, and assimilation. In essence, each of these artists use their artistic practices as havens, forging meaning about the concerns that are most relevant to them.

In his utopic paintings, Andrew Catanese explores identity and myth, melding aspects of the human with animals, foliage, and other organic forms. The body becomes an ever-changing site of transformation, a bridge between realms. Catanese blurs the great divides defined by Bruno Latour; human and animal, nature and culture, organic and technological; in favor of understanding these things as deeply intertwined. By subverting dualism, Catanese’s joyous work finds ways to talk about new and fluid constructions of the self.

‘Relaying the complex, joyful, and absurd world that is motherhood, Madeline Donahue’s vibrant autobiographical drawings are as pleasing to the eye as they are the soul. Madeline uses her personal experiences and gives us a glimpse inside, reminding us that once you are a mother, you will never be alone again. Her practice depends equally on drawing, painting, and ceramics.’ - Lauren Powell

Howard Fonda Philosophical and introspective, Fonda’s work expresses a romantic worldview and mystical inner journey. He fills his radiant canvases with colorful portraits, flowers, and a spattering of other figurative subjects, as well as ebullient abstract compositions derived from nature. He achieves a sense of immediacy through loose brushstrokes, which, as Michelle Grabner wrote, “serve as an abstract field, the artist privileging intuition over illustration and conveying transcendental philosophy without strictly picturing a divinely invested natural world.”

Cathy Lu’s work deconstructs the assumptions we have about Asian American identity and cultural authenticity. By creating ceramic sculptures and installations, she explores what it means to be both Asian and American, while not being entirely accepted as either. Unpacking how experiences of immigration, cultural hybridity and assimilation become part of the larger American identity is central to her work. Ceramics as a material is a contradiction in itself - of being both hard and fragile. She is interested in her work embodying the contradictions of being Asian American, of being both invisible and hypervisible, at times attractive and repulsive, foriegn and familiar.

Humberto Ramirez is a self-taught artist who explores the characteristics of human nature through his paintings. He narrates his ideas with densely layered and technical applications of paint. Ramirez believes there is something that connects us through how we move through the world - migration, travel, exploration. Visions of harmonic reciprocity flood his canvases: Bodily postures mimic trees blowing in the wind; the same brush stroke is carried from landscape to figure, creating a lively, uniform connection between the two. Influenced by the natural landscapes where he was born and raised in Northern California, Ramirez uses the language of paint as a central focus of his practice.

Walking in the wild plays a major role in Maria Calandra’s artistic life. She is mesmerized by the repeating lines and colors in reflected water, ancient rocks and twisted tree trunks or roots. Channeling a stream of consciousness, she pulls from both the real and imagined while using a form of automatic painting to guide her. Her paintings are dense with detail as she strives to make them as alive and wild as the lands that inspired them.

Barbados-based artist Sheena Rose uses symbols of affluence and place to address accessibility of wealth and personal power. Her painting style is characterized by flat coloring, bold patterns from the seventies and eighties, and vivid, comic-book-like palettes and vignettes. Proud figures take up literal and figurative space, donning clothes, hair and confidence that commands attention. Situated in a myriad of contexts, they are symbolic celebrations of the artist’s imagination. Using only paints that are locally accessible to her, she unlocks a certain freedom while querying real life strategies on how to get there.

Other events from Johansson Projects