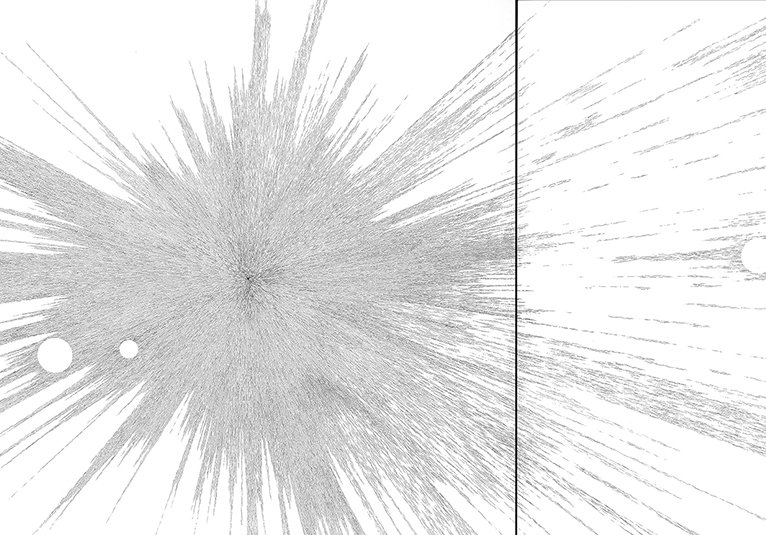 Dolby Chadwick Gallery is honored to announce an exhibition of new works by the artist Jenifer Kent, scheduled to open in the summer of 2015. Kent draws on a wide range of inspiration for her drawings, which creatively merge aspects of Minimalism, Conceptualism, and Expressionism. The myriad small markings she makes in black ink on white clayboard coalesce into networked, radial forms reminiscent of organic and biological structures, while also moving well beyond such references. They cull from scientific drawings, the almost infinitesimal textural variances in master etchings, the mirrored unfolding of interrelated micro and macro processes. They render the invisible visible, articulating three-dimensional space in unexpected, meditative ways and revealing the passage of time and space through the evidence of their exacting, iterative process.

Kent’s works are firmly rooted within the Minimalist tradition, and strong parallels can be observed, in particular, with Agnes Martin’s interest in monochromy, pattern, precision, and systemicity. Also at play are ties to artists who straddle Minimalism and Conceptual Art, such as Agnes Denes, who explores the shifting matrices of space, and Mel Bochner, who experiments with texture and accumulation. Kent, in light of this emphasis on space and accumulation, often thinks of her works as sculptural and looks to sculptors like Ruth Asawa, Lee Bontecou, and Eva Hesse for inspiration. The depth of the clayboard augments these affinities to sculpture by allowing the works to sit away from the wall, both hovering and projecting in ways drawing typically cannot.

All of the works are visually highly expressive, as the markings erupt from a central source of energy, and, occasionally, from multiple nuclei scattered across the clayboard’s matte surface. While previous works exhibit an ardent solidity of form, newer works, such Flashpoint (2014) and Vanishing Point (2014), introduce moments of pause—manifested as empty space—that disrupt the centrifugal motion. Intersection (2014) pushes this aesthetic even farther by galvanizing a different type of energy altogether. Within the bounds of a circular shape, lines ping pong back and forth between the form’s circumference, occasionally dematerializing when they intersect vacuums of what can be thought of as “paused time,” which also manifest as circular forms. Interestingly, it is the negative space of the converging lines themselves that gives these moments their shape. “Surrounded by such speed and violence,” Kent explains, alluding in part to today’s hyper-technological, fast-moving world, “these drawings are my way to slow it all down and see things a mark at a time.”

Jenifer Kent earned her BFA from Rutgers University in 1994 followed by her MFA from Mills College, Oakland, in 1999. Having exhibited extensively across the West Coast of the United States, Kent has also been the recipient of numerous prestigious awards and residencies. This will be her first solo exhibition at the Dolby Chadwick Gallery.