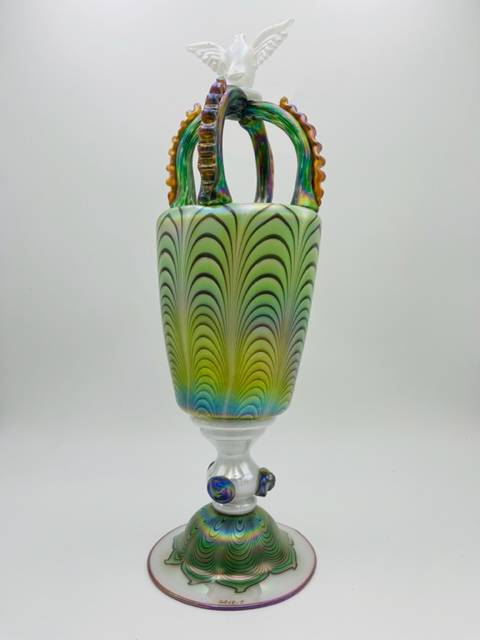 The Sandwich Glass Museum is pleased to present a special exhibition featuring the artistry of the McDermott Glass Studio on the occasion of its 20th Anniversary.  David McDermott was raised in Sagamore and Sandwich, and declined a scholarship to the prestigious Pratt Institute of New York, instead taking a job as an apprentice engraver at Pairpoint Glassworks in Sandwich when he was eighteen years old.  Like many before him, the lure of the hot glass furnace drew him away from engraving and into the “hot shop”, where he and his art flourished under the tutelage of lead Gaffer Robert Mason, originally from Scotland.  He continued working at Pairpoint, perfecting his skills for over thirty years.

During a class at the Corning Museum of Glass, McDermott met the love of his life, glassblower Yukimi Matsumoto, and together they built a studio which opened in 2001.  The successful studio is run by David and Yukimi, with the assistance of another Cape Cod native and former student of McDermott’s, Isabel Green.

In spite of the challenges of running a flourishing business and creating his art, McDermott still finds time to teach his popular class “A Different Way” at the Corning Museum.  The class is always well attended, and in it David shares his personalized approach to glassblowing; an approach that is different from the Italianate techniques current favored by many contemporary American glass artists.

“There’s nothing like the actual process of creating a piece “McDermott says when asked about his love of working with glass.  “I would trade all the pieces I have made, if it meant I could continue to turn the glass on the pipe every day.”  His advice for would be artists: “If you want to be happy for the rest of your life, blow glass!”

Other events from Sandwich Glass Museum