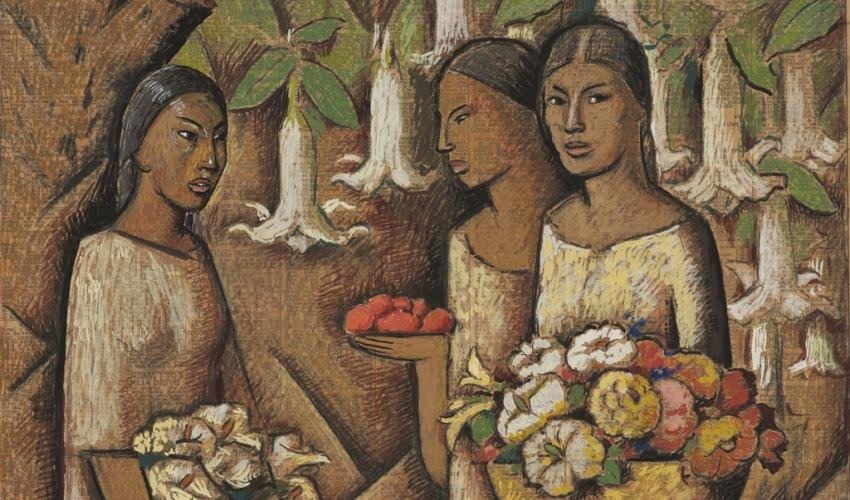 Alfredo Ramos Martínez (1871–1946) was a pivotal figure in the modernist development of Mexican art. He spent his formative years immersed in the artistic life of Paris, returning to Mexico in 1910 on the eve of the country’s Revolution. After becoming director of the famed Escuela Nacional de Bellas Artes in Mexico City, he established the nation’s first open air schools and encouraged his pupils to create work that captured observations of daily life. In 1929, Ramos Martínez and his family relocated to Los Angeles. For the next two decades, his subject matter focused on the people and culture of Mexico, with the artist receiving many notable mural commissions throughout Southern California. His canvases depict indigenous traditions, local crafts, and religious icons painted in striking hues of umber and sienna accented by bold highlights of color.

While Ramos Martínez was celebrated as a painter, some of his most iconic works of art were created on paper. Said to have always carried a Conté crayon in his pocket, the artist frequently drew on newspaper—the printed columns of text supporting totem-like figures of flower vendors. Working in combinations of gouache, charcoal, Conté crayon, and watercolor, he perfected a signature style in which forms were reduced to essentials to create a structural scaffolding across the paper’s surface. Alfredo Ramos Martínez: On Paper is an intimate exhibition of works from the Santa Barbara Museum of Art’s permanent collection. Comprising six drawings, as well as two serigraphs created by his wife María Sodi de Ramos Martínez after his death, the exhibition showcases the artist’s extraordinary draftsmanship, revealing the layered sensibility in his chosen themes.

Alfredo Ramos Martínez: On Paper is curated by Rachel Heidenry, Curatorial Assistant, Contemporary Art, and presented in both English and Spanish in the Works on Paper room of SBMA’s Ridley-Tree Gallery.