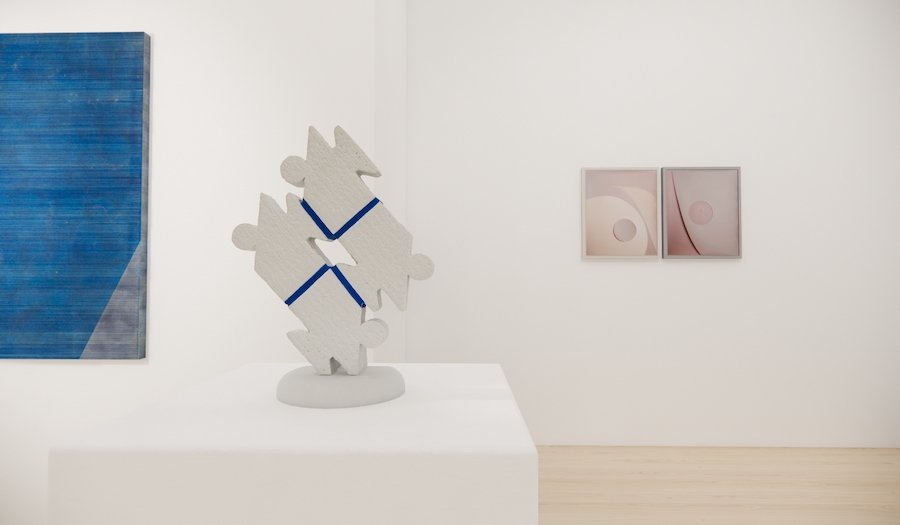 At a time when it feels like the light is finally breaking through the darkness, Community Garden — a group exhibition of seven artists — cultivates an abundance of connections. Using a variety of methods, the artists achieve a naturalism that aesthetically binds their work together into a single gesture, allowing us glimpses and sensations of the open spaces where we once walked freely, and will soon return.

Matthew F Fisher’s stylized landscapes evoke comparison to the Chicago Imagists while occupying a position in the space between the universal and the subjective. Fisher’s motifs, surreal, and almost exclusively by the sea, evoke an existential impulse. On his super flat canvases, waves rise up, playfully suspended at their most animated state, just before they crash into oblivion. The sun and the moon hang low in Fisher’s skies, rising, setting and reflecting off the water in shimmering detail. There is a subtle humor in these paintings, rendered in his free yet deliberate visual vocabulary, but there is also a quietude and a spiritual depth. This dynamic reminds us of the balance between our realities and our ideals, and that it is not always easy to tell which is which.

Rachelle Bussières fuses her background in sculpture, photography, and material research, into the lumen printmaking process by which she creates her photograms. These geometric abstractions and their luscious palette are a function of light, time, and manipulation. To define the composition of each work, throughout her process Bussières maneuvers household objects such as lamp shades, curtains and boards over her support, while regulating exposure to both natural sunlight and the artificial light she releases from flash equipment, lightbulbs and her space’s pre existing ceiling fixtures.  Rachelle’s recent works, created as a new resident in the World Trade Center’s Silver Arts Project, reflect the artist’s relocation, as she has successfully captured the light of her new environment while producing pictures that offer a new range of forms and gestures.

Clean lines, clear forms and shifting color. Craig Dorety utilizes LED technology and custom firmware to build what could be the futuristic paintings of a utopian society. Wall mounted and composed of layered planes, the structural face of these objects serves as the support upon which embedded LED lighting reflects the illuminated content of each piece. By deconstructing digital imagery mined from a range of sources Dorety recomposes something as simple as a static photo of a bay area sunset into an experience of changing colors over time, similar to the way in which music functions as a composition of sequential sounds. This visual effect defies the possibility of a fixed reading, and demands that viewers remain in the present moment of the work. The reward of their attention is a mesmerizing ebb and flow of light coalescing into impermanent crescendos of beauty that constantly fade into the next as each moment of time is lost to history.

Guided by his early childhood impressions of folk art from his legendary grandfather of the same name, Alexander Kori Girard works in a range of mediums including acrylic paint, collage and watercolor. Using an all-over composition reminiscent of textile design and the New York school of the mid-20th century, Girard densely populates his surfaces by placing petroglyphic figures and ancient nature into a hazily defined field of activity. The results of this process are paintings that contain rich landscapes of interconnectedness. In these spaces viewers are set free to navigate and insert their own narratives within works that hum with a spiritual vibration that travels across history and space

Kristina Lewis navigates her urban surroundings like a hunter-gatherer, collecting the cityscape’s detritus and debris. Reminiscent of the Bay Area funk movement, her practice involves deftly transforming this bounty into sculptural objects that exude the weight of their history while assuming dynamic and elegant forms. The resulting works shift in their potential depending on one’s vantage point, presenting light-hearted whimsy in one moment, and tongue-in-cheek irony the next.

Meticulous and monumental, Blaise Rosenthal’s paintings command a formal vernacular derived from invention, isolation and yearning. Given time, the subtleties redolent in Rosenthal’s monochromatic works provide discoveries similar to those realized by viewing majestic environments, such as the artist’s childhood home at the foot of the Sierra Nevada. Also on view are several recent works that stray, delightfully, into an approach that is at the same time playful and refined. Using sewing, these works, titled ‘Composites’, employ contrast to achieve a whole that is truly greater than the sum of its parts.

Born in the US to parents who immigrated from Bolivia, Miguel Arzabe’s work is informed by his heritage as well as his initial foray into professional life as an engineer. Drawing on these disparate identities, the artist utilizes media from contemporary resources and applies them to his grand works inspired by traditional Andean weaving. Miguel reclaims discarded work from other artists, collects outdated art related paper ephemera, and political posters, and produces raw materials using, among other things, acrylic paint, yupo paper, and inkjet printed onto canvas. This robust range of media combined with his mastery over materials allows Arzabe to achieve dynamic woven abstractions. These works are rich with color, the dramatic physical presence of their undulating fields referencing nature and identity while spanning out through culture and composition across space and time.

Other events from Johansson Projects