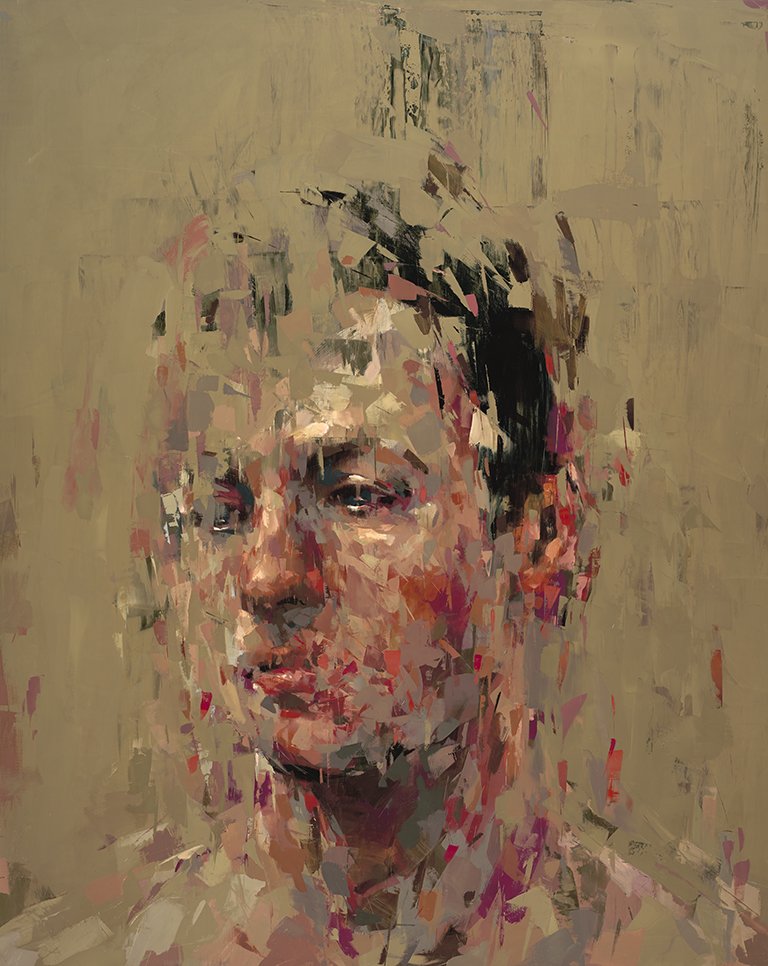 Dolby Chadwick Gallery is pleased to announce Wilderness, an exhibition of new paintings by Kai Samuels-Davis. The title is suggestive of the space captured in these works which include portraits, landscapes and still lifes. The majority of paintings included depict cropped, enlarged portraits arrived at through the application of a mark-making strategy employing repetition and layering of paint so that the figures are simultaneously familiar and mysterious. The marks are quick and choppy, confidently made with a rubber squeegee and scraping tool. In many paintings, solitary forms, of which the head and upper torso are visible, emerge from a vast darkness into a warm light, revealing either a literal narrative of someone alone in the wild, or a metaphorical and existential “wilderness”. The title of this exhibition alludes to both the physical and psychological space, not unlike the solitude of an artist painting in his studio.

While earning an MFA in film in 2006 from Art Center College of Design in Pasadena, CA, Kai Samuels-Davis simultaneously was pursuing painting. Film school influenced the cinematic qualities of his process and imagery. To Samuels-Davis, each painting is as if “you pressed pause while watching a movie. They’re not illustrations of one idea, instead they’re abstract characters where things have come before and things will come after.” Contrary to most films where each scene adds up to an overarching storyline, Samuels-Davis’ paintings are slow arrivals and discoveries rather than predetermined narratives.

There’s an undeniably deep and rich art history of painting the figure. Samuels-Davis, sites being influenced by Ann Gale, Lucien Freud, Alex Kanevsky, Rembrandt and Gerhard Richter. Each of his paintings begins by working from either personal or found photographs, sometimes utilizing multiple images of the same figure from varied angles. Samuels-Davis then filters these through studio processes such as mark-making created with less traditional painting instruments like squeegees and scrapers. Ultimately the layering creates a compression of time where multiple quiet moments, slow and fast movements, and various poses add up to form the final image. The sitter is transformed, at once both male and female, a self-portrait as well as a portrait of the viewer. The identity of the subject is not relevant as their likeness gets painted away and he responds to the painting itself. The tactile, physicality of the paint, as it is manipulated by his tools, carries the potential for evoking a multitude of perceptions. Samuel-Davis’ goal is that the paintings portray personal and universal psychological states. The build-up, breakdown and distortions, as the representational gets abstracted, emulate the transformation of these mental states, mirroring the human experience.

In his painting titled The Wilderness (2016), a somber, androgynous figure emerges calmly through a flurry of spackled marks which frame the face. For this piece, Samuels-Davis observes that “there was no intent with the color or lighting, but afterwards upon viewing it, it felt like someone lost in thought in front of a fire in the woods—it could be a campfire or they could have just burned down a cabin—all of a sudden the color and light quality made sense.” The open-ended nature of the paint application and use of distortions invites the viewer to come to his or her own narratives and psychological interjections.

Kai Samuels-Davis was born in Catskill, NY in 1980. He earned his BA in 2002 from the State University New York, Purchase, followed by his MFA in 2006 from Art Center College of Design in Pasadena, CA. He has exhibited across the United States, United Kingdom, and France. This will be his second solo exhibition at the Dolby Chadwick Gallery.