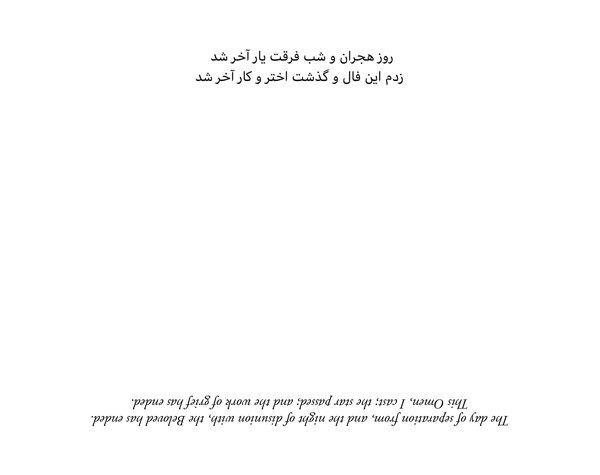 Jack Fischer Gallery is pleased to present Yeki Bood, Yeki Nabood, Once Was, Once Wasn’t, the first exhibition with the gallery by Taravat Talepasand. Join us for the opening reception on May 26, from 4:00 to 6:00 p.m. at our Minnesota Street Project location. The show will be up through June 30, 2018.

For centuries, it has been a Persian tradition to consult Hafez when confronted with a difficult decision or choice. When used in divination, it is widely believed that Hafez’s poetry will reveal the answer to your destiny. After the Iranian Revolution in 1979 when the Shah of Iran fled into exile and the Islamic Republic was established there was a strict ban on anything sexually suggestive. Although many of Hafez’s poems deal with love and wine perhaps and allegory for divine love, after the revolution this sort of illustration with semi-nudity was banned. The tradition of using Fal-e Hafiz was gone —for me an affirmation of life. Creating pleasure in recalling the bad days that are long gone and still fast approaching. Future never seems to hold a candle to the past. Our yesterdays are extremely colorful, so glorious that the details remained vivid.

Once upon a time, or as Iranians begin a story Yeki Bood, Yeki Nabood literally meaning ‘Once was, Once wasn’t’ which today reflects the complex nature of Iranian society, politics and religion. A phrase repeated often enough to why we choose to be alone. The painted Fal-e Hafez cards honor the women that have so defiantly pushed against the male hypocrisies, not only in Iran and the United States, but everywhere. I claim these painted poetries as love letters to all women, supporting their marches and protests across borders.

My works command the viewer to reconsider the various ideological assumptions that index Iranian identity, state power, and gender in order to consider how the body and the image come to signify and rebel against normative notions of Iranian subjectivity. My interest, however, is in painting a present which is of and intrinsically linked to the past, making it easily understood by the Iranian and inductive of assumption for the Westerner.

Taravat Talepasand was born in 1979 in the United States to Iranian parents during the Iranian Revolution. Retained close family and artistic ties to Iran, Isfahan, where she was trained in the challenging discipline of Persian miniature painting. Paying close attention to the cultural taboos identified by distinctly different social groups, particularly those of gender, race and socioeconomic position, her work reflects the cross-pollination, or lack thereof, in our “modern” society. Talepasand's interdisciplinary practices draw on realism to bring a focus on an acceptable beauty and its relationship with art history under the guise of traditional Persian painting. Her interest, however, is in painting a present, which is of and intrinsically linked to the past, making it easily understood by the Iranian and indicative of assumption for the Westerner. Talepasand reconsiders the various ideological assumptions that index Iranian identity, state power, and gender in order to consider how the body and the image come to signify and rebel against normative notions of Iranian subjectivity via paintings, drawings, sculptures, and installations. “Since I myself am considered a taboo in that I am a conglomerate of equal, yet irreconcilable cultural forces, my work challenges plebeian notions of acceptable behavior,” says the artist.

Other events from Jack Fischer Gallery