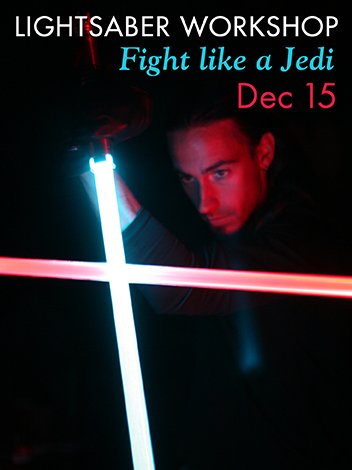 Come and learn the basics of lightsaber combat used in the epic film series! Using the same types of lightsabers used on the film sets, we'll cover the basics of Jedi attack and defense with the lightsaber, as well as the tactics of the evil Sith. In this stage combat class, students will learn together how to tell stories through action, just like in the films. May the Force be with you!

Originally from Chicago's western suburbs, Dave is a Fight Director and certified Alexander Technique teacher working in and around the city of Chicago. He currently holds the rank of Advanced Actor/Combatant with the Society of American Fight Directors, a nation-wide organization dedicated to the art and training of stage combat. Among his credits as a fight director, he has worked with the Side Project, the Plagiarists, Clockwise Theatre, and several others. In addition, he has assisted at American Theatre Co, the Florentine Opera, Illinois State University, and served as a guest artist at California State University-Stanislaus. He has also staffed stage combat workshops at venues such as the Denver Center for Performing Arts, Drake University, Northern Kentucky University, and the University of Nebraska. His most recent work was seen in The Bard Unraveled (Innervation Dance Coop.), The 39 Steps (Wheaton Drama), and his upcoming production The Titus Andronicus Project (The Home for Wayward Artists).As a teacher of the Alexander Technique, Dave is excited to begin this new journey as certified teacher with the American Society for the Alexander Technique.  He first began taking private lessons in 2007 while an acting student at Illinois State University under the tutelage of Paul Dennhardt. After private lessons, he began the 3-year, 1600 hour teacher training course taught by Daria Okugawa. Dave has lead workshops on the Technique at the Elgin Fringe Festival and the Winter Wonderland Workshop, the largest regional stage combat workshop in the country. His current work as a Company Associate with MACE: Movement And Combat Education is a driving force as Dave continues to use the Technique as a basis for the instruction and performance of stage combat.Outside of his career, Dave is an avid reader, and  a particular fan of Thich Nhat Hanh. He can also be found enjoying the Chicago restaurant scene, watching documentaries, or walking the lakefront...usually with a cup of coffee.

Other events from The Actors Gymnasium