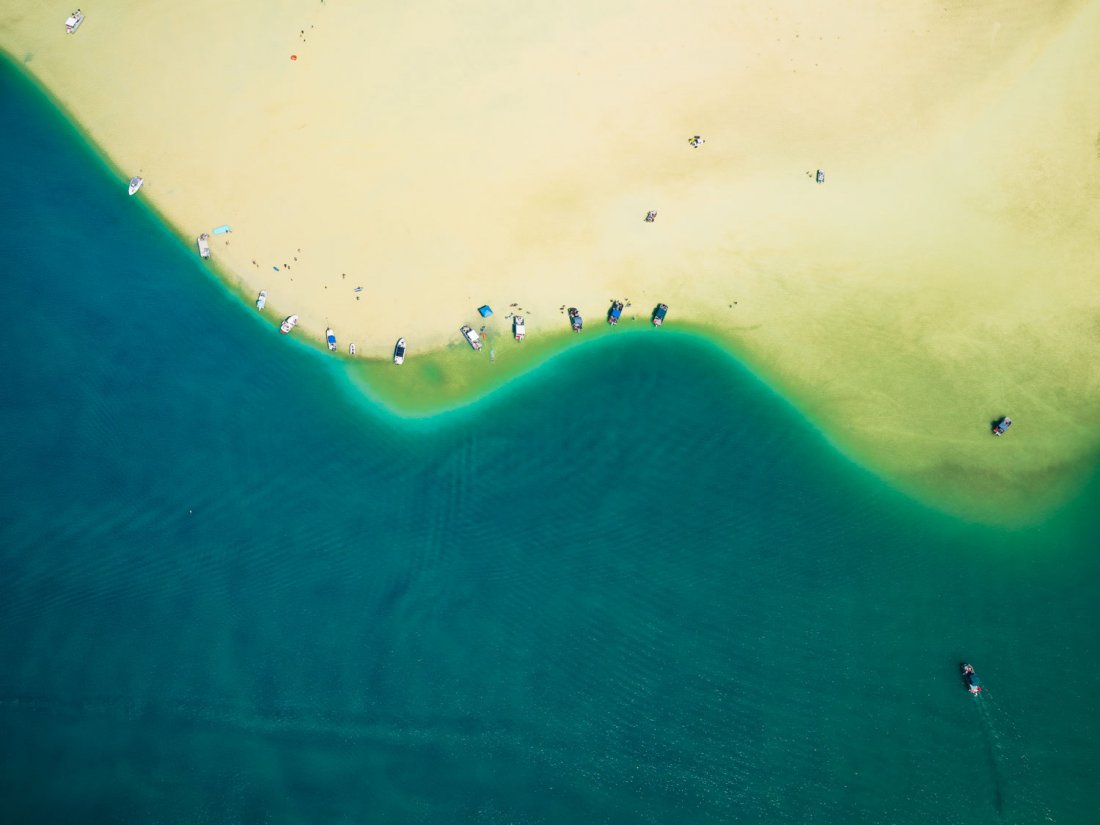 As a photographer, Boaz defies a traditional approach to perspective and instead situates himself quite literally in the sky above. The resulting work is breathtaking and  arresting. Each image captured by Boaz offers his audiences a rare composition of both nature and civilization in all their complexity. Originally a recording studio owner and music producer in New York City, Boaz became an avid aerial photographer almost entirely by accident after he won a “doors off” helicopter ride over Manhattan that opened his eyes to a new realm of experience. The oddity of what he saw sparked a deep fascination that led Boaz to return again and again to the cramped cockpits of such helicopters until he found in them a studio at 1000 feet above.

Flying well away from the world below, Boaz holds an eye in the sky. With it, he surveys terrain and develops concepts in real time as colors and textures flood into sight during each ride. Working under the throbbing sounds of the propellers overhead, Boaz directs the pilot over radio and creates spontaneous images of calm amidst chaos. In speaking of his method, he explains, “I seek out sound in my photos; I look to find those symbiotic patterns and fast-changing colors that play together in rhythm, similar to the layers that make up a beat.” Through this unique process, Boaz discovers a synesthetic harmony in each photograph just as he would if he was visualizing music on a track.

As a result, the 13 large-format dye sublimation prints of Hawaii, Israel, Arizona, California and Key West in this exhibition hold a lingering tranquility as they flow throughout the gallery. The exhibition’s invitational image “Desert Isle” shows the tides of an emerald green ocean washing over sunbeam yellow sands to form a vibrant ripple green that coalesces into an S-shaped coastline where distant row boats and sunbathers appear like ants. His visionary approach to expanding how audiences see the everyday is reminiscent of Andreas Gursky who did the same in Rhine II (1999) which captured the magnificence of the Rhine River with virtuoso ease.

Gifted with a sight of the world top down, Boaz’s aerial photography evokes a cosmic awareness of humanity as a tiny dot in the universe which borders on the surreal. He credits his influences to be Joan Miro, Christopher Nolan, Andreas Gursky, Annie Leibowitz and Edward Burtynsky. Born in India with deep roots in Sri Lanka, Boaz moved from Chennai to the United States. He studied Psychology at Rutgers University, but it was there that he also took his first photography class. After graduation, he ran a successful recording studio in Soho. Then, as he returned to photography, he took multiple courses including digital printmaking at the International Center of Photography. In May 2019, Boaz was announced as the winner of the National Geographic Adventure photography contest for his piece “All The People”.