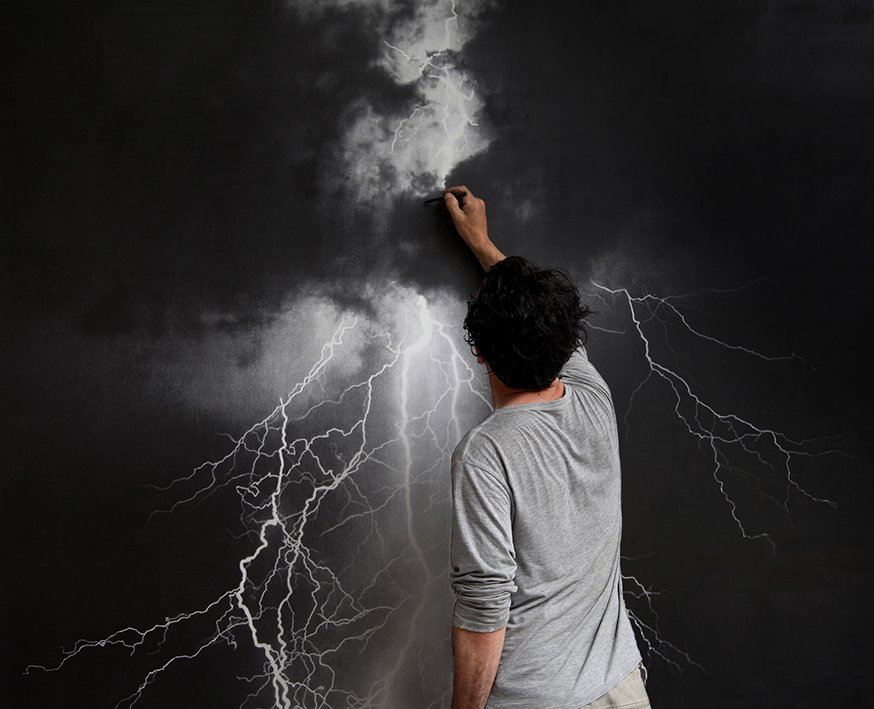 Featuring recent works, pencil drawings on wood or canvas, which ideally continue the series Ritroverai le nubi, started in 2013, in which the artist focused on the basic dimension of the event, with the observation of phenomena that are constantly changing, but without giving up their identity. Clouds, infact, as well as lightings, are a metaphor of our being, where the attention towards the world makes us kaleidoscopic, while the identity does not change.

Elvio Chiricozzi is a meticulous artist who has reached an agreement with Time, in his works it flows outside its normal path.  There is no definite limit to thinking out, planning, working on and terminating a project. The rigour in execution is a mirror of the artist’s personality which does not admit shortcuts and instead choses to lengthen the process without setting any objective so that the finiteness of one work opens his commitment toward the next.

Using the term of artefact to describe this artist’s works is not in any way demeaning. It is the manual element which in his case is the decisive one to comprehend the complete poetics that is at the base of all his research. His ability to describe an entire life is his particular relationship with art.

A sign that presupposes culture and research, here nothing happens by chance and there are no immediate gestures, even in describing the tumultuous movement of the clouds and in designing the moment lightning strikes the earth.

The minuteness of his execution is not solely to astound those who look.

In this trying and tiring project Chiricozzi has attempted a difficult operation; he has violently catapulted his clouds to earth, he has interrupted the magic of their lightness and the references to the fantastic they can offer.  He wants them on the ground so we can see our dreams well and from up close.

Grey is the idea of the sky and clouds, the tabula rasa before the blue, with everything this means.  Nature, thus the life of individuals, cannot limit itself to an unaware search for gratifications and transcendent aspirations. To see the part in shade of what is quintessentially brilliant, no longer theorising damage or error, helps one instead to give some sense back to it all.

Catalogue by Gangemi, with a text by Claudio Libero Pisano.

His work is part of the permanent collection of the United Nations in Geneva.

In 2013 he realized a permanent site-specific installation for the Castello di Rivara, curated by Franz Paludetto.

The most recent works are inspired by natural phenomena to deal with existential issues.

He lives and works in Rome.