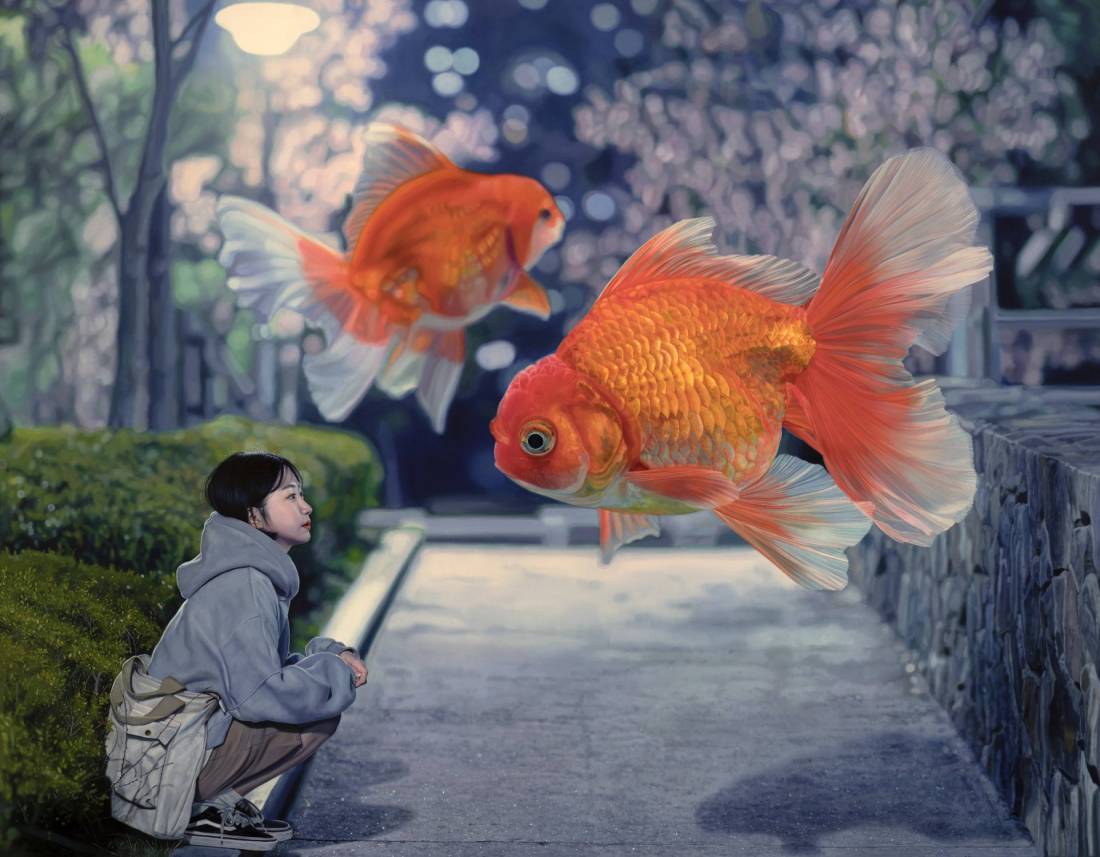 Korean artist, Jeong Woojae invites us to experience a surreal situation, where a young girl’s constant companion is a tropical fish. She goes about her everyday life against a backdrop of park, suburb and street accompanied by various sumptuous and over-scaled specimens, which seem perfectly at home in an alien environment. They float, guide and hover in the urban air, objects of fascinated contemplation.

Woojae is a representational painter of great skill. He deploys hue, tone and texture with a discerning and accurate eye. The fish themselves are masterpieces of animated nature-study. Entirely convincing in their pictorial veracity, they glisten with sparkling iridescence and rich jewel-like colour. The girl is rendered with sensitive and subtle touches that capture a delicate character. She and her animal partner are located in carefully painted backgrounds that articulate disparate town and landscapes.

These dream-like vignettes are compelling. They convince because of the artist’s closely observed and literal interpretation. There is little room for ambiguity: the fish swim in the same medium as the girl. Woojae presents this as actual, his insistent realism records the fantastical and impossible scenario as fact.

Such images prompt ideas of fairy tale transformations, the universal stuff of folk tale and legend. Will the fish become a human? Or something else? Will the girl become a fish? The implication is that the fish is conjured from the girl’s imagination. It appears in her world; she does not appear in its. We see into her thoughts and follow a fantasy discourse that runs parallel to her daily routine. The fish represent an alter-ego: a graceful, fluid, and transcendent antidote to the mundane, separate from its messy and banal complexities.

Woojae’s paintings illustrate a porous place, where avatars leak from one realm to another. What appears solid is undermined by contextual ambiguity. The girl wills a floating world into existence, a magical space for dreams and possible transformations.