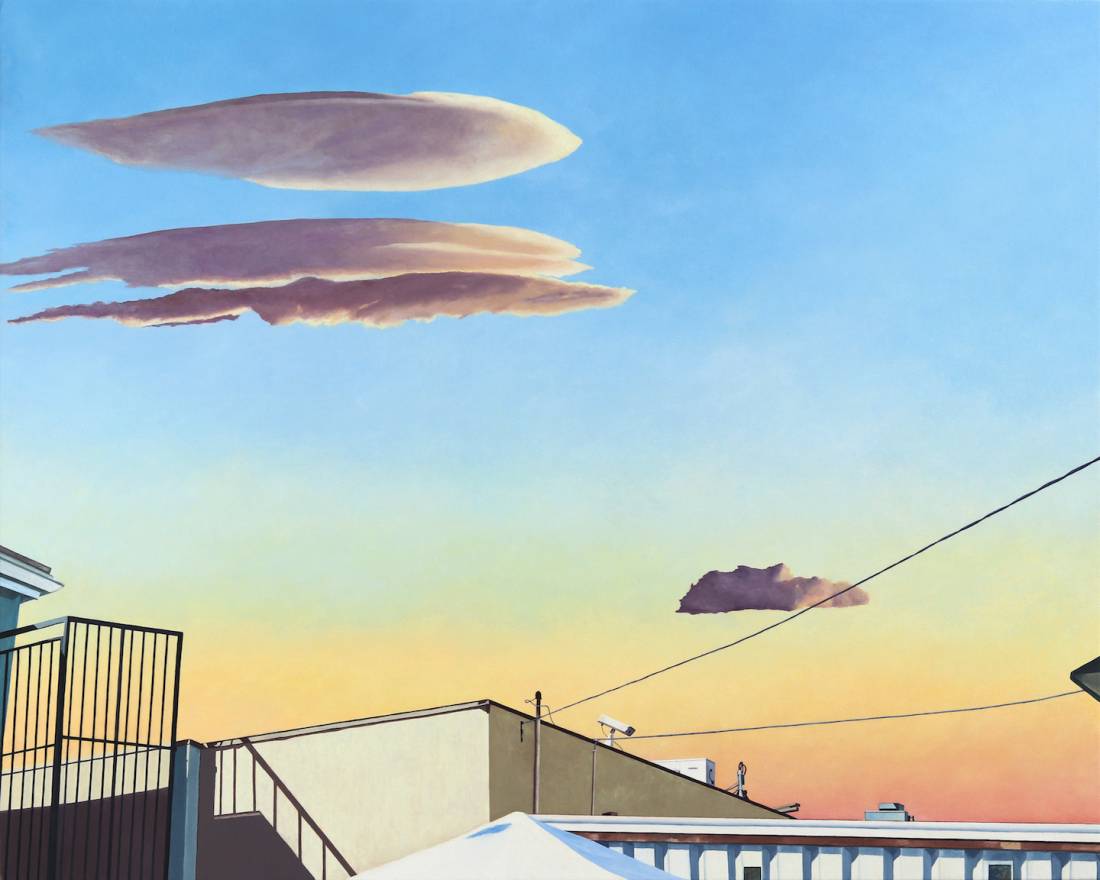 In this series, Rasmussen posits the simple idea that we can find moments of transcendence in ordinary places.  Each painting depicts a view from a parking lot. These transitional spaces are neither here nor there, rarely one’s starting point or destination, and are an experience many people have in common.  City skylines and industrial canyons become the spaces in which Rasmussen invites the viewer to search for those moments of wonder.  Transcendence can be found in the angle of a shadow on a concrete wall, the intersection of two rooflines, the texture of corrugated metal.

While based on photo references of real places, the paintings are not photo realistic: Rasmussen lets her imagination run wild - inventing color palettes and combining different skies, real and imagined, to create the feeling she is looking for.  Balanced against the rusted metal and concrete, these soaring skies, sunset-lit clouds, and deep shadows are a touch of nature in this human-created world.  Hard-edged shadows bisect walls, creating striking intersections of light and dark and giving a hint to the forms outside of the frame.  The stark angles of the walls are given unexpected dimension and depth by the shadows and by the textures of age Rasmussen captures so well.

Rasmussen’s paintings dance around the edges of the solitary corners of an unnamed city that is both familiar and yet could be any (or every) city.  The paintings are about place but also about form and color - in that aspect they hover close to the edge of abstraction.  Rendered in saturated colors that are one step beyond real, sky, shadows, pavement, and metal collide in the compositions.  The geometries of the architecture nod at color field painting while tiny details - wires, security camera, roof vents, traffic cones, telephone poles peeking above a wall - ground the paintings deeply in reality.

The compositions are alone but far from lonely - there is evidence of human presence although they are devoid of actual humanity.  And yet the color palette is joyful, beautiful; there is an optimism in the work that transcends the solitary feel.  We are standing with the artist peering at her view of the world - the vivid skies, the surreal clouds, the unexpected colors of the walls - and with her we learn to see the beauty in a single moment in these in-between spaces.

Christine Rasmussen is an American artist raised in Pakistan, Vietnam and the United States. She received her BA (Double Major - Art Practice and Peace & Conflict Studies) from the University of California, Berkeley. Rasmussen has exhibited in multiple juried exhibitions and her work is in private collections worldwide.  Her work has been featured in Not Real Art’s Q+Art, ShoutOut LA, Artillery, Art & Cake and Voyage LA among others. She was awarded a Chalk Hill Artist Residency, was commissioned for the prestigious Artist Label Program at Imagery Estate Winery, and her work is in the Hilbert Museum of California Art.  Rasmussen lives and works in Los Angeles.

Other events from Billis Williams Gallery