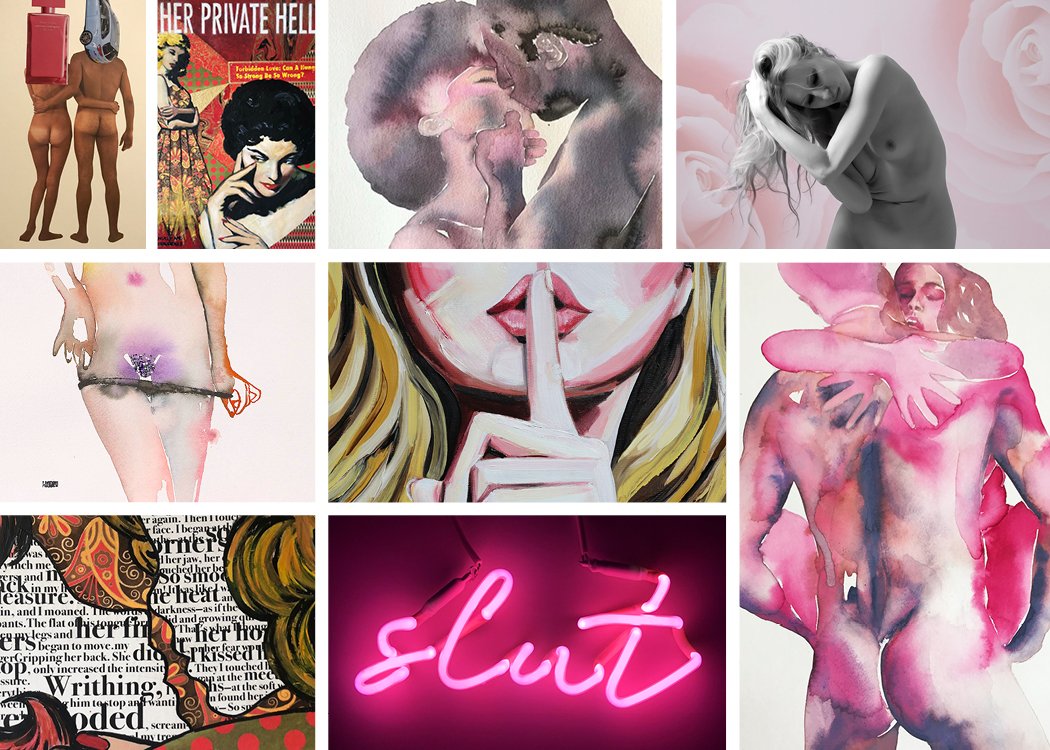 The Untitled Space is pleased to participate at Superfine! Art Fair 2019, opening on May 1st in New York City. Superfine! Art Fair brings a new look and location to its 2019 show, leaving the Meatpacking district and re-launching at 107 Grand Street in Soho from May 1-5th. The Untitled Space gallery will be presenting the works of 6 female artists revolving around the theme of “The Female Gaze on Love, Lust and Longing.” Exhibiting artists include Annika Connor, Cabell Molina, Fahren Feingold, Indira Cesarine, Sarah Maple and Tina Maria Elena Bak.

Annika Connor is a modern-day Renaissance woman known for painting and activist art. Her work explores feminine identity and often uses symbolism to engage the viewer. Connor received a BFA from the School of the Art Institute of Chicago. Since then, she has worked professionally as a painter in New York, London and Stockholm while participating in numerous national and international exhibitions. Connor currently resides in Brooklyn, where she maintains an active studio. In addition to her work in the studio, Connor is also a SAGAFTRA actress. She is heavily involved in sustaining the art community in which she creates. As a supporter of the art she admires, Connor is the Owner/President of Active Idea Productions, an arts organization whose mission is to serve the artistic community by facilitating the presence and publication of young talented artists and educating the public about their work. She has had her own solo exhibition at The Untitled Space and has shown in The Untitled Space group shows “HUMAN/NATURE”, “THE 'F' WORD: Feminism in Art”, “IN THE RAW: The Female Gaze on The Nude”, “UPRISE”, “SHE INSPIRES”, “SECRET GARDEN”, and “ONE YEAR OF RESISTANCE.”

Formerly an art director, Cabell Molina worked for multinational advertising agencies in cities all over the world. Molina studied fine art and design at the Art Center College of Design in Pasadena, California. She uses her background in photo manipulation, type design and art direction to create powerful, large scale fine art and pop art pieces. Her work has been in shows and private collections in all over the world. In 2016, she was admitted to the Saatchi Art Curators Choice Pop Art Collection. Since 2017, Molina has been represented by The Untitled Space Gallery in New York City. She works on commissions and conceptual commissioned portraits, and serves as founder/owner of LOVE ART Gallery and Studio in South Norwalk, CT with a focus on pop and street art. Her work has been in shows and private collections around the world. Recent exhibitions with The Untitled Space include “ONE YEAR OF RESISTANCE”, “SECRET GARDEN”, and “SHE INSPIRES”.

Watercolor artist Fahren Feingold brings an ethereal state to her unique paintings depicting the female form. Her watercolors featuring bold feminine nudes reference imagery from early 20th century French erotica, 70s & 80s American vintage magazines, and today’s Internet girls. The Los Angeles native moved to New York at the age of seventeen to study at the Parsons School of Design. After earning her BFA between Parsons and Glasgow School of Art, she worked as a fashion designer for top brands including Ralph Lauren, Nicole Miller and J.Crew, among others. In 2016, her dreamy watercolors caught the eye of the legendary Nick Knight, who commissioned her to illustrate Paris Fashion Week for SHOWStudio. Between 2016 and 2017, her work has been featured in numerous international exhibitions including “Moving Kate” curated by Nick Knight at SHOWStudio in London and The Mass in Tokyo, Japan, “The Vulgar” at The Barbican in London curated by Judith Clark and Adam Phillips, “Red Hot Wicked” at Studio C Gallery in Los Angeles, as well as The Untitled Space group shows “UPRISE / ANGRY WOMEN” “SECRET GARDEN” and "ONE YEAR OF RESISTANCE" curated by Indira Cesarine and “LIFEFORCE” curated by Kelsey and Remy Bennett. Touted as “a trailblazing artist on a meteoric rise” by Vogue, her watercolors have steadily gained recognition from collectors and critics alike for their sensitive, dreamlike colors, graceful brush strokes and rendition of the female nude. Through her erotic depictions, Feingold gives new voices to women of the past and present while exploring larger notions of female constructs in today’s society. Her work was recently exhibited in ”EDEN” at Spring/Break Art Show 2019 and was featured at SCOPE Miami and AQUA Art Shows, 2018 as well as “(Hotel) XX” at Spring/Break Art Show 2018.

Indira Cesarine is a multimedia artist who works with photography, video, painting, printmaking and sculpture. A graduate of Columbia University with a triple major in Art History, French and Women’s Studies, she additionally studied at Parson’s School of Design, ICP, School of Visual Arts, Art Students League and the New York Academy of Art. Cesarine had her first solo show at the age of sixteen at Paul Mellon Arts Center. Her work as an artist has been featured internationally at many art galleries, museums and festivals, including The Metropolitan Museum of Art, Mattatuck Museum, CICA Museum, San Luis Obispo Museum of Art, Getty Images Gallery, French Embassy Cultural Center, Art Basel Miami, Cannes Film Festival and the International Festival Photo Mode to name a few. In 2014, her public art sculpture, “The Egg of Light” was exhibited at Rockefeller Center as part of the Fabergé Big Egg Hunt. Her work was auctioned at Sotheby’s New York for the annual “Take Home A Nude” art benefits in 2017 and 2018, and was featured at SCOPE Art Basel (Switzerland) and SCOPE Miami in 2018, as well as SPRING/BREAK Art Show in 2018 and 2019. She has also been selected to represent the State of New York for HERFLAG2020, a nationwide initiative which commemorates 100 years of Women’s Suffrage, with a female artist representing each of the 36 states that ratified the 19th Amendment.

Sarah Maple graduated with BA in Fine Art from Kingston University London in 2007 and in the same year won The Saatchi Gallery’s “4 New Sensations” award for emerging artists. Maple’s artwork, film, and performances have been exhibited internationally at galleries and institutions including Tate Britain, The Barbican, AIR Gallery, and The New Art Exchange, among many others. Maple’s work has been the subject of documentaries including for ARTE and VPRO. In 2015 she released her first book “You Could Have Done This,” a hardback of selected works. The same year she was awarded a Sky Academy Arts scholarship from Sky Arts, which included funding, mentoring and a Sky Arts documentary. In 2017 she gave a TEDx talk in Birmingham, UK on the importance of free speech, titled “The Freedom To Be Challenged.”

Her work has been featured in numerous international publications, including Vogue, The Guardian, i-D Magazine, The Sunday Times UK, The Independent, People Magazine, Dazed, and the Huffington Post among many others. In 2018 she was invited to make a limited edition cover for Harper’s Bazaar’s art issue alongside artists including Yayoi Kusama, Barbara Kruger, and Linder Sterling. Her artwork is in collections including Soho House, The Hyman Collection and the Ned. Recent exhibits with The Untitled Space include solo show, "THOUGHTS & PRAYERS" as well as group shows, "EDEN" at SPRING/BREAK Art Show 2019, "DEFINING FORM" and "SELF REFLECTION."

ABOUT THE UNTITLED SPACE:

The Untitled Space is an art gallery located in Tribeca, New York in a landmark building on Lispenard Street. Founded in 2015 by artist Indira Cesarine, the gallery features an ongoing curation of exhibits of emerging and established contemporary artists exploring conceptual framework and boundary pushing ideology through mediums of painting, sculpture, printmaking, photography, video and performance art. The gallery is committing to exploring new ideas vis-à-vis traditional and new mediums and highlights a program of women in art as well as special events aligned with our creative vision.