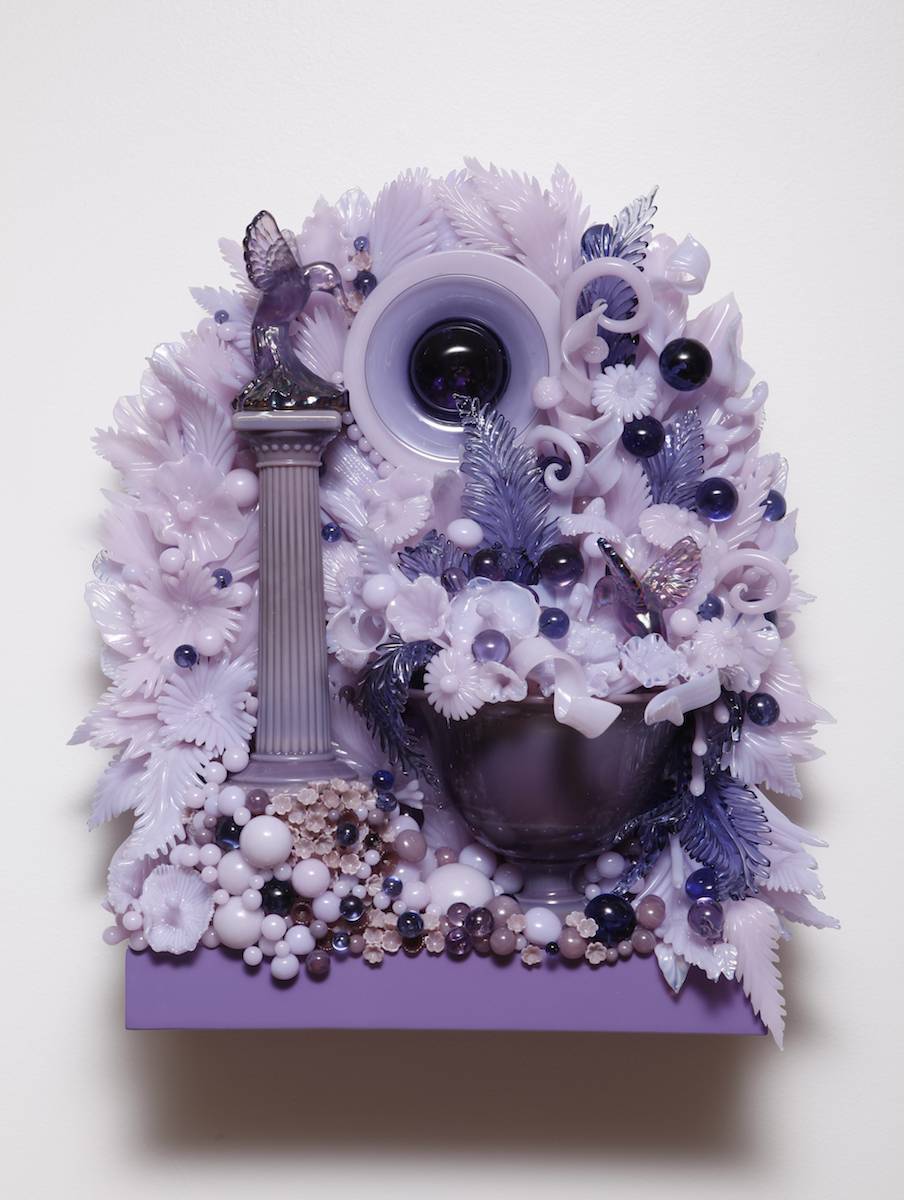 Heller Gallery is pleased to present Gathering the Sky, Mining the Milk, its fourth solo exhibition of new work by award-winning, Philadelphia-based artist Amber Cowan, represented by the gallery since 2012.

Gathering the Sky, Mining the Milk will be the largest gallery exhibition of Cowan’s work to date and include three installations: Champagne Gold (2022), Anthropomorphic and Melting Milk (2017-22) & Hands and Handkerchiefs (2016-22); two major wall assemblages Ecco to the Bridesmaid: ‘I Know Not What Has Happened To Your Pod’ and Soft Simplicity in Bittersweet Orange, Lemon and Mandarin (both 2022) as well as five medium size wall grotto pieces, two new sculptural works, and several smaller cluster wall works.

Cowan’s diorama-style wall-sculpture assemblages are made of collected, recycled, re-worked and now also custom-made, pressed glass.  The exhibition title itself is a nod to the names used for certain proprietary colors —sky, a light blue, and milk, an opaque white—developed by individual manufacturers.  Her source pieces were once commercially produced in the best-known, but now defunct, glass factories, located mostly in the United States.  New for Gathering the Sky, Mining the Milk, are historical pieces made in France (in Pen & Signett Swimming in Sky) and Czechoslovakia (in Ecco to the Bridesmaid: ‘I Know Not What Has Happened To Your Pod’), as well as custom-made components.

In the work made for the exhibition Cowan’s new approach is also reflected in the bold steps she has taken to acquire very particular pieces to work into her wall installations, ones that she would not have used in the past.  Having originally come across most of the source material through chance —as gifts, from scrap yards, antique stores and online sales —she was only then becoming familiar with its potential breadth and depth. Now, expert at researching specific colors and forms, Cowan has even acquired and restored press molds to have unique pieces in never-before used color custom made for her, such as the fans in the Fountain with Fans in River and Jade (2022) piece.

Like the Buontalenti Grotto in the Boboli Gardens, Cowan’s larger fantastical reliefs are also sometimes divided into two parts, such as the blue Ecco to the Bridesmaid: ‘I Know Not What Has Happened To Your Pod.’  The piece both continues the saga of the Bridesmaid, a glass figurine and a recurring Cowan character, and also introduces an environment inspired by her interest in early video games, here specifically ‘Ecco the Dolphin,’ released in 1992 by Sega.  Cowan calls these games her first encounter with a digital fantasy world and while she gives it a decidedly feminist spin, it is the back-and-forth between the emerging metaverse and the physical object that most clearly communicates her desire to activate her characters and lead the viewer into the piece, as if it were a still from a fantasy movie.  Both the ‘Bridesmaid’ and the ‘Lion’ figurines make a repeat appearance here, having previously been included separately in major pieces as early as 2015.

With graduate school a decade behind her, Cowan has attained master-level skill, which allows her to be uninhibited by technique.  Perhaps even more importantly, she has also gained the confidence to put front and center what she first fell in love with about glass and why despite its kitsch-prone practices it has remained the central focus of her work.  Cowan calls glass ‘a deliciously permanent eye candy material’ and leans confidently into this side of it.  “The word ‘eye candy’ has been such an unwanted term with glass, especially in academic circles, but I am OK with that,” she notes with a mix of satisfaction and perspective.  It is this newly confident point of view that distinguishes the 2022 body of work from the pieces that came before.

Amber Cowan received her MFA from Temple University’s Tyler School of Art in 2011. She is the 2014 recipient of the prestigious Rakow Commission from the Corning Museum of Glass.  Her work has been published in the Corning Museum’s New Glass Review, the New York Times, Harper’s Bazaar, Craft Magazine and Glass Quarterly and featured in museum exhibitions across the United States, in Europe and in China. Her work is included in the collections of the Toledo Museum of Art, Toledo, OH; Corning Museum of Glass, Corning, NY; Museum of Arts & Design, New York, NY; Speed Art Museum, Louisville, KY; the Brunnier Museum, University of Iowa, Ames, IA; the John and Mable Ringling Museum of Art, Sarasota, FL; and the Rhode Island School of Design Museum, Providence, RI.  In 2018 Cowan was honored by UrbanGlass for her contributions to the field and in 2021 was named a USA Artist Fellow.

Heller Gallery, founded in 1973 in New York, provides a curated platform for studio artists whose practice incorporates glass and whose work with the material broadens the horizons of contemporary culture.  We identify, nurture and represent emerging artists as well as prominent international masters.

Numerous artworks have entered preeminent public collections as a direct result of Heller Gallery's exhibitions and advocacy.  New York's Metropolitan Museum of Art and Museum of Modern Art have acquired works from the gallery as has The Corning Museum of Glass, The Los Angeles County Museum of Art, The Museum of Fine Arts, Houston, and numerous museums worldwide, including Victoria & Albert Museum, Musee des Arts Decoratifs de Louvre, and Hokkaido Museum, among others

Other events from StudioStripe NYC