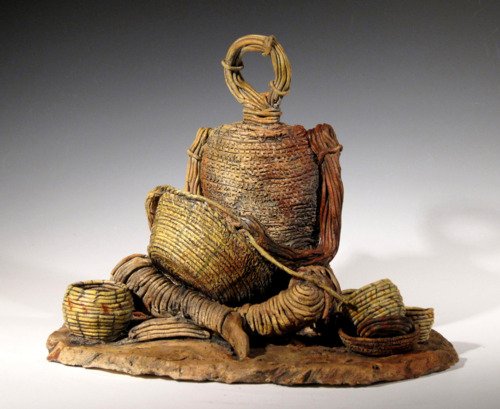 The Ceramics Annual of America (CAA) is an ambitious exhibition and art fair spotlighting the quality and diversity of contemporary ceramics from around the world including works from China, Korea, Mexico, Australia and Italy. It is the only event of its kind in the United States and the goal is to encourage the education and enrichment of the public, cultivate a fertile art market, and foster dialog between collectors and makers of ceramic sculpture.

Part of California’s continuing legacy of excellence and innovation in ceramics, CAA is the largest exhibition and art fair that is entirely focused on ceramic art in America and is modeled after the Ceramic Biennials held in Europe, Korea, Japan and China. It provides a venue for the top regional and international artists from working in the clay medium to show their work to a broader audience of collectors.

CAA is organized by the California Ceramics Cooperative, a group of invested regional ceramic artists, and will feature panel discussions, lectures, tours as well as daily interactive art demonstrations all day that will provide a greater understanding of the artistic process for students and educators alike.  Featured artist and instructor Kevin Nierman, author of “The Kids ‘N’ Clay Ceramics Book,” will provide “Artistic childcare” on Saturday and Sunday from 11-3.

This year, the city of San Francisco is partnering with CAA. The exhibition will be held at the San Francisco Civic Center. CAA expects high attendance with over 25,000 vistiors. This is an exciting time for  CAA, the Civic Center has not been used as an art venue since 1986. From 1946 until the last years of the Arts Festivals in the mid-1980s, the Arts Commission used budgeted monies from the City’s general fund to purchase jury-selected work by contributing local artists. As a result, the Civic Art Collection contains a number of early works by influential artists, including Robert Arneson, Bruce Beasley and Viola Frey. In 1978 an exhibit of Arts Festival acquisitions was held at the Arts Commission’s gallery, followed in 1986 by a second showing in the lobby of the TransAmerica Building, after which many of the objects were incorporated into the Arts Commission’s interdepartmental loan program for display in City offices. For many of the artworks included in The Art of a City, this is the first time they have been publicly exhibited in over twenty years.

Other events from Dvorak Art