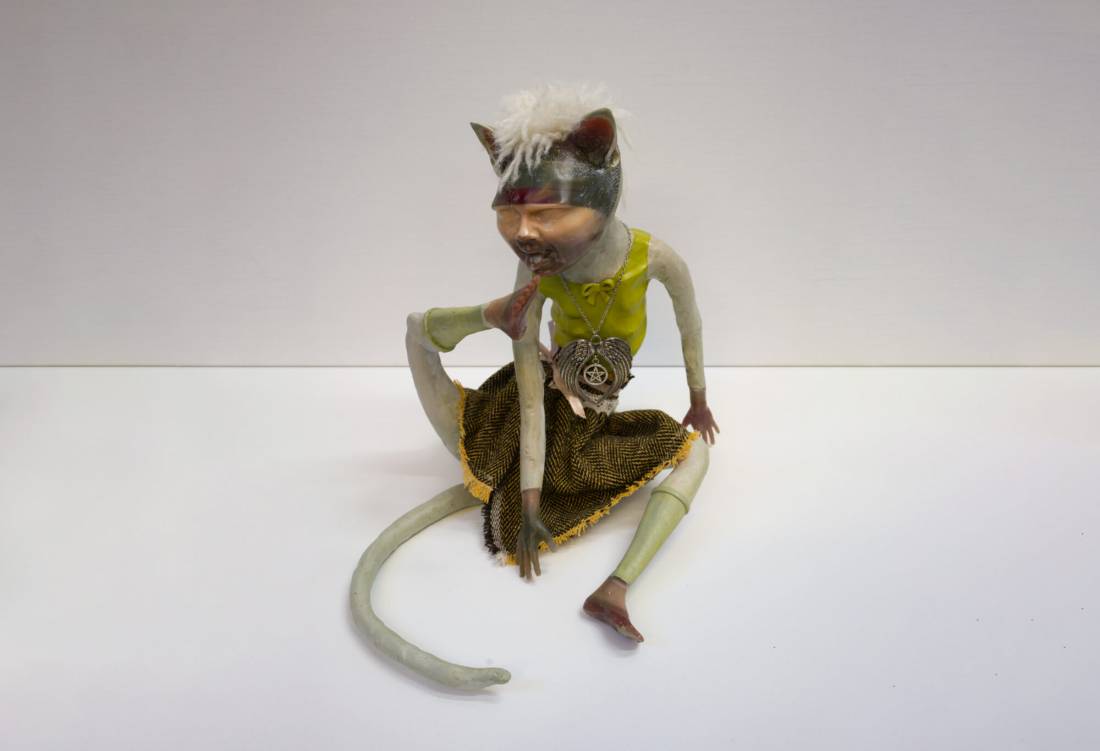 Public Gallery is pleased to present Maison Catabase, the first solo exhibition in the UK by French artist Nils Alix-Tabeling. Uniting new sculptures, photographs and works on paper as well as groups of ornamental furniture; Alix-Tabeling imagines a house on three levels where themes of folklore, witchcraft and the occult prevail, weaving allegories of divine domesticity.

Catabase, from the Greek Katabasis, refers to a journey downward, the equivalent in English to a descent such as the sinking of the sun or crossing into the underworld. The display on the ground floor centres around an alchemical table orbited by peculiar chairs, like three priestesses attending a seance. One features a seat of hay from which a zombified hand emerges, as if to grasp the harvest before being fully devoured by the earth. The back of the chair is delicately embroidered with snail shells gathered by the artist from the beach in Ostend, Belgium on the summer solstice – spiritually charged with the energy of the sun. Beneath the plexiglass tabletop are 64 mirrors embellished using acid and silver, which represent the 64 hexagrams from the I Ching, or Book of Change, the ancient Chinese cosmological text. A series of small-scale photographs on the wall make the room an eerie boudoir. Featuring balloon flowers and bright body paint, they are more camp and disturbing than erotic or pornographic – a failed attempt at a magic trick.

The ensemble of furniture on the first floor includes a semi-figurative daybed based on Heliogabalus, the Roman emperor whose reign was steeped in religious controversy and sexual scandal. He is known for bringing a Syrian sun cult to Rome, which is said to have involved priests conducting frenzied, ritualistic ceremonies where men castrated themselves while in a collective trance. In this room are also three paintings by the artist’s friend Marieke Bernard-Berkel. Alix-Tabeling is attached to the idea of kinship in his practice, and the addition of these beloved works brings a salon-quality to the space. These are hypnotic, yet the idealised landscapes are disturbed by the meandrous, textured paintwork. The pieces reflect on trauma and death, and they seem to exist in a state of flux – the bright colours turn into a grey mud from which new visions emerge. They function almost as a warning: the most beautiful scenery may transform into a memento of sadness.

In the basement, three carved wooden chairs inspired by furniture designer Carlo Bugatti stand tall. Positioned horizontally they appear like thrones and personify the three Greek goddesses of the moon, Selene, Artemis and Hecate. Nearby are three sculptures of small cats dressed in clothes that are simultaneously cute and demonic – like haunted familiars. The artist describes the rebellious nature of cats, who have managed to remain semi-feral even after thousands of years of living alongside humans. Also on view are two drawings of the brain and nervous system, stripped from the rest of the body and floating in outer space on a wooden panel. These organisms appear fragile and alien, sad and alone without a body to surround them – desperate to disentangle themselves from the material world.

Within this cabinet of curiosities, Alix-Tabeling summons collective memories relating to mythology and sorcery, recalling witch-hunts as well as violence against women, queer folk and people of colour, and reminding us that witches and herbalists were historically allies for these communities. Both alchemy and the I Ching had to be stripped of their occult aspects to be kept alive – as queer communities assert their right to exist, and are often made invisible in normative history.

Nils Alix-Tabeling (b. 1991, Paris, France) lives and works in Montargis, France. His practice comprises sculpture, performance, video and sound installations, writing, and his own curatorial projects. He holds an MA from the Royal College of Art, London, UK. In 2017, he was artist in residence at Krems’s Kunsthalle, invited by Stadtpark gallery, Krems, Austria. Solo exhibitions include Together at Last!... Pierrot and Harlequin in a rural fantasy at Liste Art Fair, Basel, Switzerland (2021) and the performance Passiflore Incarnée, Printemps-Été Autumne-Hiver at Palais de Tokyo, Paris, France (2019). Recent shows in the UK include a duo project with artist Rebecca Jagoe, for the performance evening and exhibition Florilège at Jupiter Woods, London, UK (2019). Group exhibitions include Moteur Idéal, a public sculpture and performance commission with Justin Fitzpatrick for La Maison Populaire de Montreuil, France (2021) and The many face god.desses, curated by Thomas Conchou, Maison Populaire de Montreuil, France (2021). He has recently curated Fly, Robin, Fly, a group exhibition at Mécènes du Sud, Montpellier, France (2021). He is represented by Galerie Piktogram in Warsaw, Poland.