AMY CASEY "Lost at the Bottom of the World" New Paintings 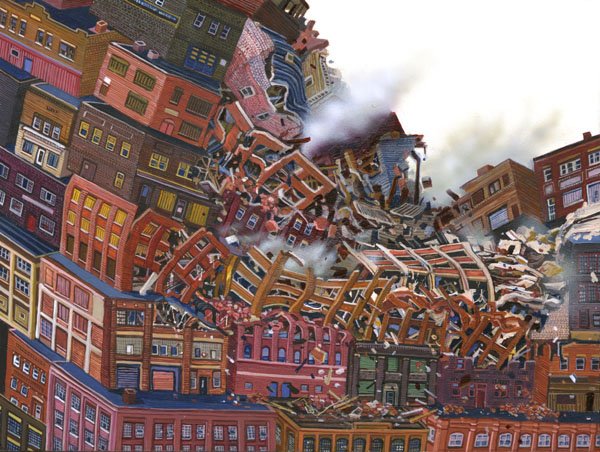 Zg Gallery is excited to announce our 18th season opening with
Amy Casey's solo exhibition "Lost at the Bottom of the World".

Amy Casey’s highly detailed paintings of un-peopled,  urban “landless-landscapes” have always reflected her concerns for the city and its natural environment.  Over the years the narrative through-line of her meticulously painted cityscapes dealt with perpetual cycles of boom or bust, blight & renewal, infrastructure decline vs. re-building, under-planning and over-development;  but now, even more troubling, socio-economic, political, structural, and environmental issues course through the images.

At first glance it would seem that Amy has shifted her attention from the city, past the suburbs and exurbs to uninhabited forest and sea, but upon closer inspection houses and buildings appear amid the outsized tree stumps and adrift in the flood plains.  Nature is reasserting itself in unpredictable ways.

Amy states: “Early in 2017, I found myself lost in a Finnish forest, confused after following a pleasing series of mossy rocks. With no sense of direction, no cell phone, no food or water, no understanding of the language and no one to try it on, should I want to, I felt the surge of adrenaline and panic that is basic to this situation. Though this event wasn’t life threatening and I obviously eventually made it home, I recognized the feeling as being fairly representative of how I feel in the world right now; confused – not recognizing anything I thought I knew, with a low level panic always just in reach and no idea of how to properly proceed in the world.

For the past 13 years I've been working on an evolving series of cityscapes which reflect my view of the world as a changeable nervous construction.  Using real places and elements of the landscape as sort of building blocks, I've been building and rebuilding my own cities in painstaking, almost meditative detail, tinkering with them as I try to make sense of the world.  They eventually grew into their own ground, supporting each other.  I guess its hard for me to see that sense of community and growth right now. For better or worse, buildings are breaking free from the superstructures of previous paintings. In some paintings, those structures are literally crumbling. What do we do when the world seems to be falling apart?

Lately - in these strange and exhausting days, I’ve been thinking a lot about uncertainty. In my recent paintings, that uncertainty and the idea of feeling or being lost is a focus for me.  A profound lost-ness which could be the unsettling experience of finding yourself in a world turning or already turned alien around you, or more optimistically, a lost-ness that could lead to a hopeful escape to a new world. These paintings reveal a desire to escape into nature which unfortunately seems to be on a shakier ground than ever, in a changing climate.  A nature which though still inviting, is both under threat from us, and also threatening us in return.  The water is rising. The forest is cut down. But stumps, while dead, often create a home for new life of a different type- even if only mosses, fungus and parasites. Perhaps it is a cause for hope. Life adapts and uses whatever resources are there to continue. I guess that is what we will do. Though I hope for the best, my paintings frequently express my anxiety for society and our world

Amy Casey received her B.F.A. from the Cleveland Institute of Art in Ohio.  She has been a recipient of the Cleveland Arts Prize: Emerging Artist Award, a Creative Workforce Fellowship and Vermont Studio Artist Residencies.  She has exhibited throughout the country in Chicago, Los Angeles, San Francisco, New York, including the Indianapolis Museum of Contemporary art, The Museum of Contemporary Art, Cleveland, and The Cleveland Institute of Art. Casey also has an upcoming solo exhibit at the Canton Museum of Art and a group show at the Crystal Bridges Museum of American Art.

Her work has been published in The New York Times, The Chicago Tribune, Harper’s Magazine, New American Paintings, Hi-Fructose and Juxtapoz and has been commissioned by New York’s City’s MTA where her poster is currently hanging throughout the city’s subway stations.  This will be Amy Casey’s seventh solo show with Zg Gallery in Chicago.  “Lost at the Bottom of the World” will be on view from September 6 through October 26, 2019
Preview Amy Casey's new works: www.ZgGallery.com/Casey.htm

Other events from Zg Gallery, Inc.