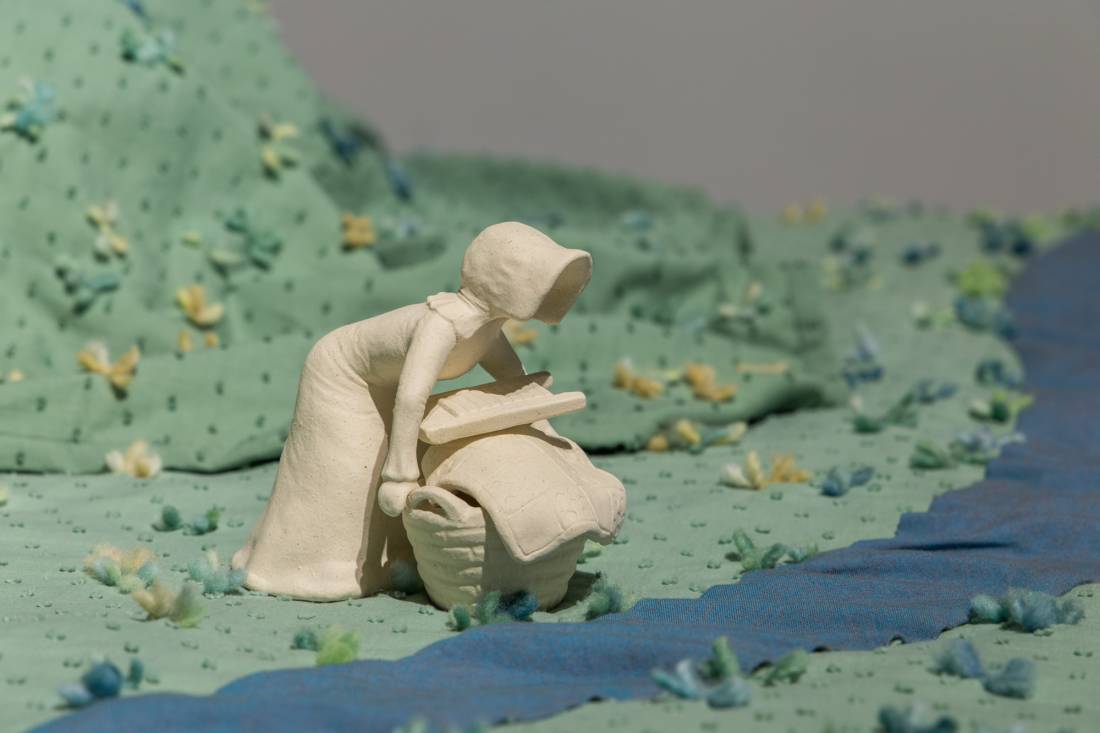 The Jane Hartsook Gallery is pleased to present work by our 2021 fellows and artists in residence: Kelly Chang, Rachel Farmer, Meiasha Gray, and Heidi Lau. Our Residency and Fellowship program fosters artistic growth by providing makers with a creative community, time, space and materials to explore and generate new bodies of work in ceramics in vibrant New York City.

Kelly Chang is a New York City-based art director, animator, and designer, who is developing his art practice in clay. Using his background in computer graphics and 3D modeling and animation, Chang employs 3D printing and scanning, photography, and computer simulation to create his slipcast ceramic sculptures. During his residency, Chang continued to develop a project that considers the replica and its value, or lack thereof. In this series, he reimagines the trash, plastic, and electronics of our current era as valuable artifacts found in the distant future.

Rachel Farmer is an artist who uses ceramics and quilts to re-examine histories that get passed down through families, institutions, and pop culture—such as the mythology of the American West, and the artist’s own Mormon pioneer ancestry—with a queer, feminist bent. During their fellowship, Farmer developed a body of work that featured miniature sculptures of pioneer women in action in diorama-like scenes that question the dominant narratives of the American West.

Meiasha Gray is a New York City-based artist who works in ceramics and performance art. In her work, Gray is interested in the ephemeral—one of the reasons she is drawn to clay as a material given its ability to preserve momentary gestures—and in the domestication of space. During her fellowship, Gray furthered a body of work that integrates other media, including photographs, into her clay practice. She investigated the relationship between people and objects and made several life-sized sculptures based on her memories and family photographs.

Heidi Lau is a New York City-based artist who grew up in Macau. Lau works in paper and ceramic to do research-based work that explores nostalgia, memory, and the creation of history. Taoist cosmology influences much of Lau’s work, as do folk superstitions and Macau’s colonial past. Lau is particularly interested in burial chambers as a transitional space in which a body teeters between personhood and objecthood. During this fellowship, Lau made a series of large-scale sculptural fountains inspired by the mausoleum of Emperor Qin Shi Huang (259 – 210 B.C.) in Xian, China.

Other events from Jane Hartsook Gallery