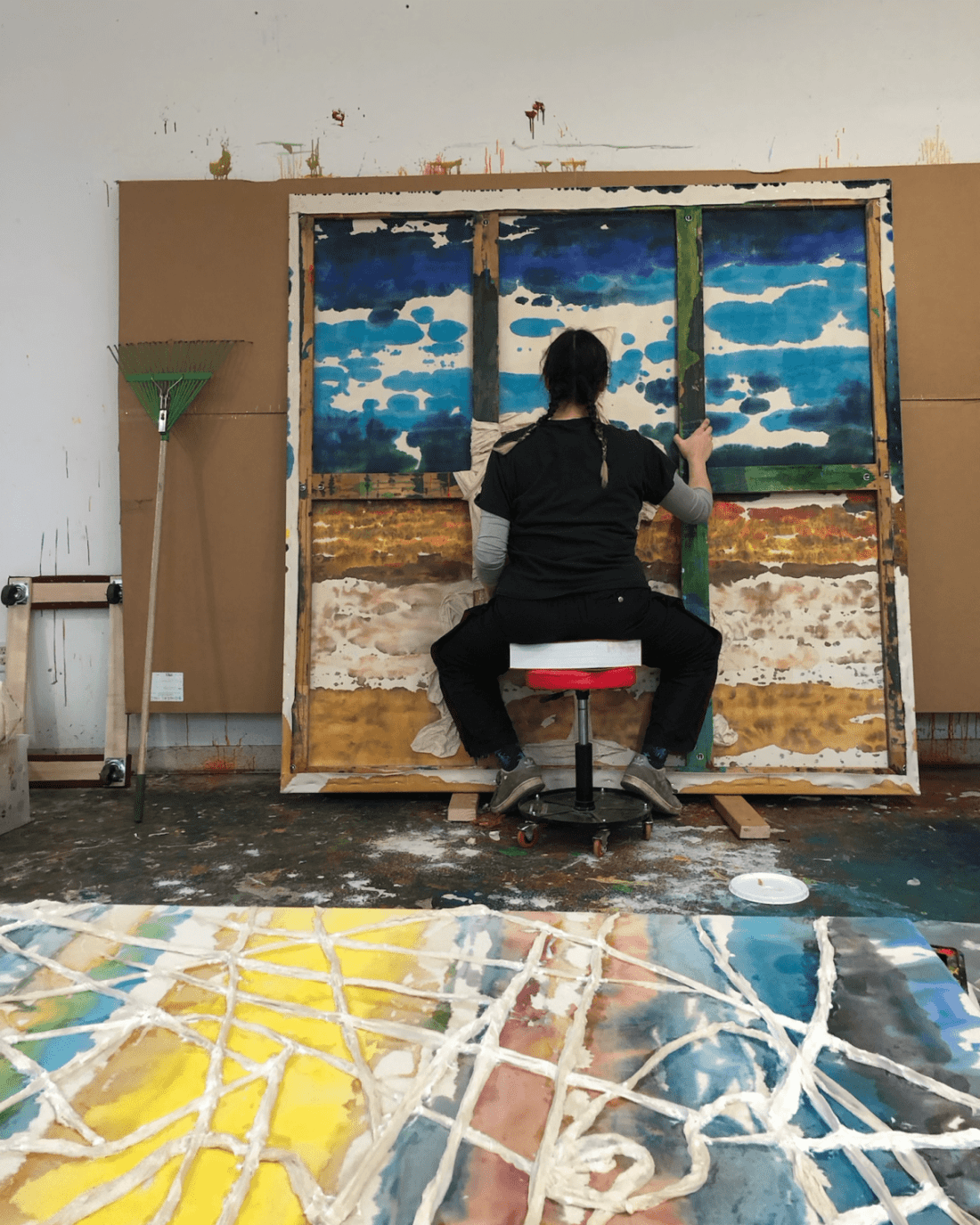 Dona Nelson views the medium of painting as a material/conceptual construct. In ReFiguring, one painting at a time (1977 to 2022) – opening at Thomas Erben on Thursday, October 27 – she presents to us how her work, over a career of 50 years, has evolved into its unique position, merging materiality with ideas and bodily experience.

The works selected exemplify Nelson's original thinking, addressing such questions as “What is painting space,” “How can painting address the viewer,” and “How can a painting be constructed to provoke physical as well as intellectual engagement in the viewer?” “Figuring out” one canvas at a time, Nelson casts the medium onto unstable ground, connecting it to our reality of existing day by day.

Since her participation in the first iteration of the Whitney Museum's Independent Study Program in 1968, Nelson has pursued an independently minded practice, countering Painting’s becoming a “capitalist project of repetitious products.” Though her work received early critical validation, was included in Lucy Lippard’s 1971 26 Contemporary Women Artists at the Aldrich Museum – its 51st anniversary currently being celebrated with the exhibition 52 Artists: A Feminist Milestone – and received the Guggenheim’s Theodoran Purchase Award that same year, Nelson stopped making and subsequently destroyed her large color-saturated, architecturally inspired abstract paintings of the period.

Instead, her Untitled from 1978, with its curved black lines, represents a first literalization of “turning one’s head away from the frontality of abstract painting.” Also included in the show are small, figurative black and white enamel paintings from the early ‘80s: at the time a radical shift towards eradicating the separation between the Abstract and the Figurative.

In 1981, influenced by the flat albeit figured space of early Italian Renaissance painting, Nelson began a group of large figurative works, and interiors with still life objects, exhibited in shows curated by the likes of Klaus Kertess, Lisa Liebman and Elizabeth Murray, which found wide critical support. From this body of work, Table Top is on view, along with Surveyor’s Lunch, depicting the artist’s father. Oliver Nelson, painted from memory and blending with the Nebraskan landscape he surveys, turns his head as if someone just said his name. The gesture suggests the presence of another person – the artist herself, or the viewer in front of the painting.

The idea of consciously addressing or even demanding the viewer’s engagement – both physical and mental – has been an important part of Nelson’s practice ever since, culminating in the two-sided paintings she began making in 2003. With these double-sided works as well as her “boxes,” which in 2015 reintroduced the figure, the viewer must walk around each artwork to truly see it, and this confrontation with its physical presence leads to an interrogation into how it was made.

One of two examples present is Fisherwoman (2022). While one side of this painting presents us with abstract “landscapey” horizontal lines, generated by strips of cheesecloth having been stained, poured over with paint and finally removed, the other side – almost shockingly – introduces a figure sitting between and holding on to the two inner vertical stretcher bars. Stains seeping through from the opposite side create a blue and white, sky-like background, against which the stiffly dried, visceral materiality of figuratively arranged muslin is particularly stark.

This painting exemplifies Nelson’s thinking and practice as they have evolved over the decades.
It features several of her achievements, most importantly, a recognition of the generative potential of color field’s staining technique on “the other side.” Her paintings are no longer mere surfaces, but holistic entities where “front” and “back” generate each other materially, with acrylic and canvas as the medium and stretchers playing an integral part in creating the work. Understanding herself as an image maker, she not only dissolves the dichotomy of Abstraction/Figuration, but by placing Painting squarely in three-dimensional space, establishes a more democratic and non-hierarchical relationship with the viewer. All in all, it is quite an accomplishment.

This is Dona Nelson's fifth exhibition with Thomas Erben, adding to a long list of widely reviewed solo shows at galleries such as Michael Benevento (Los Angeles), Cheim & Read, Michael Klein, and Rosa Esman (all New York). In 2018 the Tang Teaching Museum, Skidmore College, Saratoga Springs, gave her a survey show as did the Weatherspoon Art Museum, Greensboro, NC, in 2000, which both were accompanied by a full color catalogue.

Nelson has received many grants and awards including an Anonymous Was A Woman grant in 2015, an Artist Legacy Foundation Award in 2013, a Foundation for Contemporary Arts Award in 2011, and a Guggenheim Memorial Fellowship in 1994.

Other events from Thomas Erben Gallery