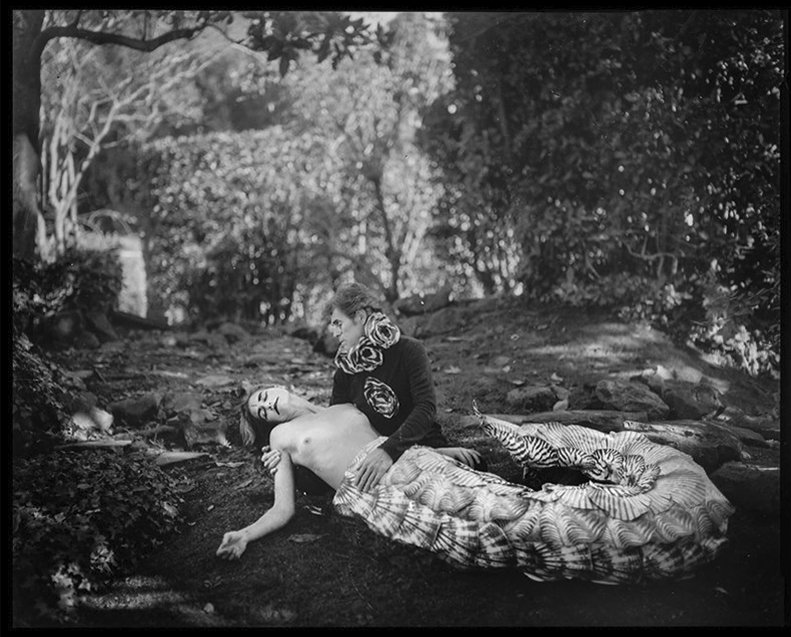 SLATE contemporary gallery is proud to present an immersive and imaginative exhibition, Muse, for the winter season in Oakland, featuring new works by acclaimed photography, sculpture, and installation team Michael Garlington and Natalia Bertotti. SLATE contemporary first exhibited the duo’s work in the 2016 group show, Mystery and Narrative. The 2019-2020 exhibition will be a solo show, and has been planned to coincide with their participation in Oakland Museum of California’s exhibition No Spectators: The Art of Burning Man (on view through February 16), which was organized by the Smithsonian Museum’s Renwick Gallery and traveled to the Cincinnati Art Museum this past summer. Garlington and Bertotti’s monumental Paper Arch is arguably the centerpiece of the museum exhibition, and is not to be missed.

For their show at SLATE, the team will be presenting all new work in a variety of media including unframed prints, a digital presentation, and their trademark unique sculpted frames. As usual, the pair’s work is marked by a fluid sense of the real. Starting with fantastical scenes that are created in the artists’ “minds’ eyes,” Bertotti and Garlington recruit models and construct grandiose costumes and surreal props, which are assembled in settings as banal as Petaluma’s industrial riverfront and as exotic as Venice, Italy. The staged scene is then captured in a single straight shot using an old-fashioned camera to transfer the image to medium-format film. While the scenes are illusionistic and strive above all for emotional impact, they document an accrual of people and things in a specific time and place that is in fact more “real” than most of the images we look at every day.

The show’s title, Muse, refers to Natalia, who appears as the actress or model in so many of the works. Other images feature friends, clients who have commissioned family portraits, and occasional celebrities (such as Willem Dafoe who plays the prince in Willem and the Mermaid).

Photographer Michael Garlington grew up in northern California and learned his craft working in a black- and-white photography lab that his family owned, turning his career eventually, through his partnership with Natalia Bertotti, to performance and sculpture. Their work has been supported by the Smithsonian American Art Museum, SF Camerawork, National Endowment for the Arts, and the Andy Warhol Foundation. They have received Burning Man Honoraria for their internationally acclaimed installations “Totem of Confessions” and “Photo Chapel.”

Other events from SLATE contemporary