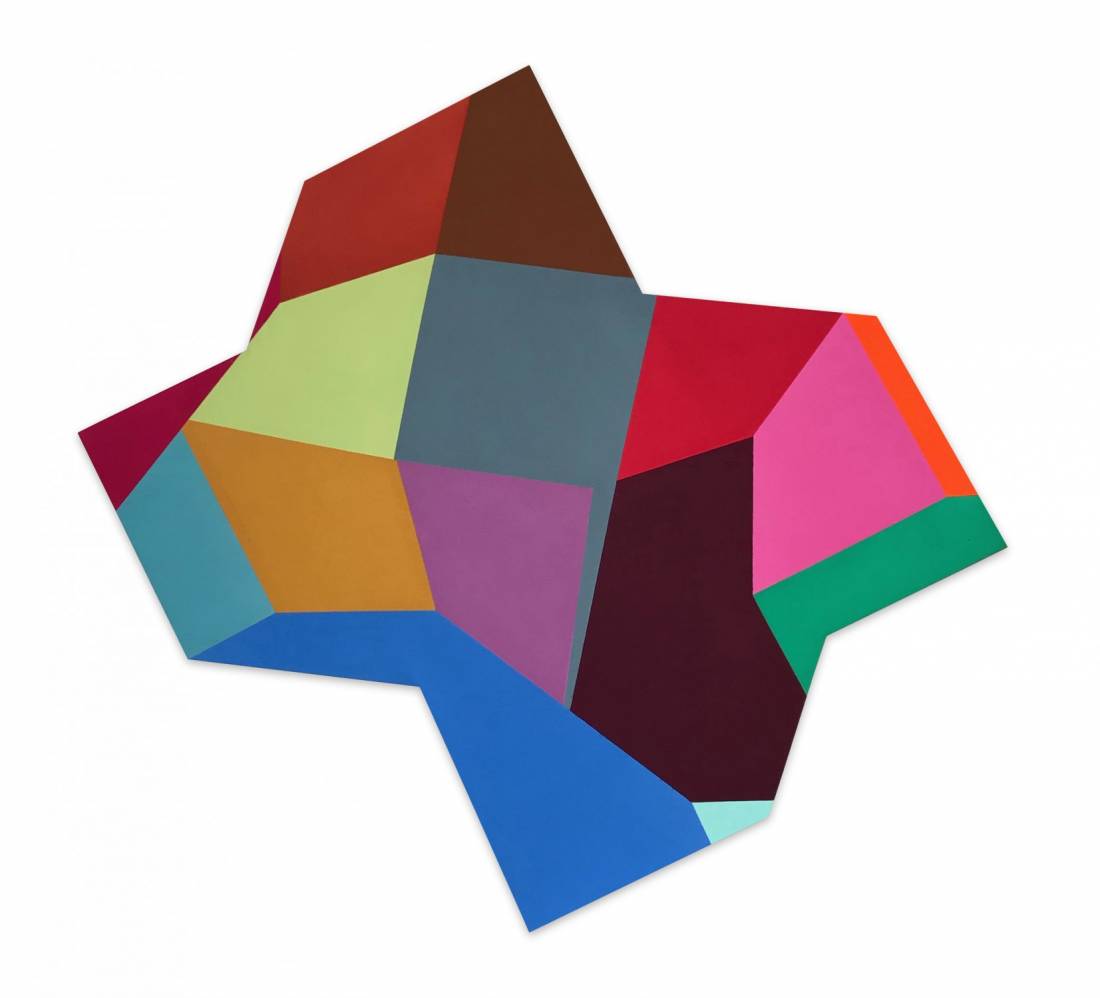 Brian Gross Fine Art is pleased to announce the opening of “Tesseract,” an exhibition of recent paintings and sculpture by Santa Fe based artist Mokha Laget, on Thursday,  May 26th, from 5:30-7:30pm, with an artist talk at 6pm.  On view will be seven shaped paintings on canvas whose acrylic and vinyl emulsion surfaces are divided into her signature colorful geometries.  Also featured is a new sculpture in bronze, whose complex form achieves the perceptual illusions of space found in her two dimensional works.  The exhibition will be on view through July 30, 2022.

As in all of her mature work, Laget employs richly colored interlocking and overlapping shapes set within eccentrically defined structures to create striking visual conundrums.  In works such as “Tesseract” (2020) and “Wherefore #3,” (2022) Laget has divided her compositions into broad irregular shapes of potent color, forming a tessellated field reminiscent of viewing a mosaic close up.  In other paintings, Laget layers rectangles, parallelograms, and polygons, using their intersections as borders between different tones, while playing them off the canvas shapes to produce an irresolvable perception of visual depth.  Rendered in patinated bronze, “Construction No. 1” (2020) combines Laget’s signature jagged geometric forms, sensitive surface application, and shadow into a dynamic sculptural form that challenges the viewer’s understanding of its physical presence.

Mokha Laget grew up in Algeria and France, and went to university in both Europe and the United States.  She studied fine arts at the Corcoran School of Art in Washington DC, and later worked as a studio assistant to painter Gene Davis, a major figure in the Washington Color School.  Laget has been awarded residencies at Mass MoCA, North Adams, MA; Millay Colony, Austerlitz, NY; Green Olive Arts, Tétouan, Morocco; and at the Institut français du Royaume-Uni, London, England.  Laget has received the Lorraine Bernstein Award for Painting from the Corcoran School of Art, and in 2019 was the recipient of a Pollock-Krasner Foundation Grant.

Opening June 11th at American University Museum at the Katzen Arts Center, Washington, DC, “Mokha Laget: Perceptualism” surveys the last ten years of Laget’s artistic practice.  Curated by Kristen Hileman and featuring over 40 paintings, sculpture, drawings, and lithographs devoted to the exploration of perception and space, the exhibition will be on view through August 7, 2022.

Laget’s work has been exhibited throughout the United States and Europe, and can be found in the collections of the Museum of Geometric and Madi Art, Dallas, TX; the Ulrich Museum of Art, Wichita State University, KS; Art in Embassies, U.S. Department of State; The Artery Collection, Washington, DC; and the National Institutes of Health, as well as many private collections worldwide.  Tesseract is Mokha Laget’s second exhibition with Brian Gross Fine Art.