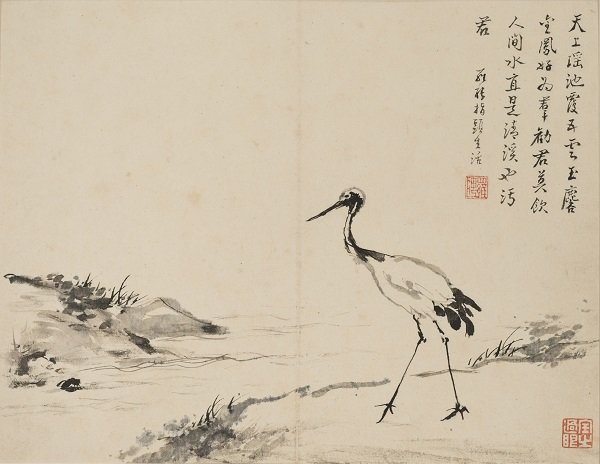 An 11th-century Chinese painting, Old Tree, Rock, and Bamboo, recently appeared on public view, and is widely regarded as the only surviving painting by Su Shi (1037–1101), one of the greatest names in Chinese cultural history. A statesman, scholar, poet, writer, calligrapher, and painter, Shu Shi is considered the fountainhead of the so-called “literati” painting tradition that came to dominate much of later Chinese art. This exhibition celebrates the ideals of literati painting as first formulated by Su Shi and his circle of friends, and further developed by succeeding generations of artists and calligraphers. The exhibition includes 12 paintings and calligraphy from the 17th through 19th centuries from the Museum’s permanent collection, supplemented with private loans.

Image: LUO Ping, Chinese, 1733–1799, Finger Painting of Crane, From “Album of Miscellaneous Subjects” with WANG Feng. Ink and color on paper; album leaf from a set of 12. Anonymous loan.