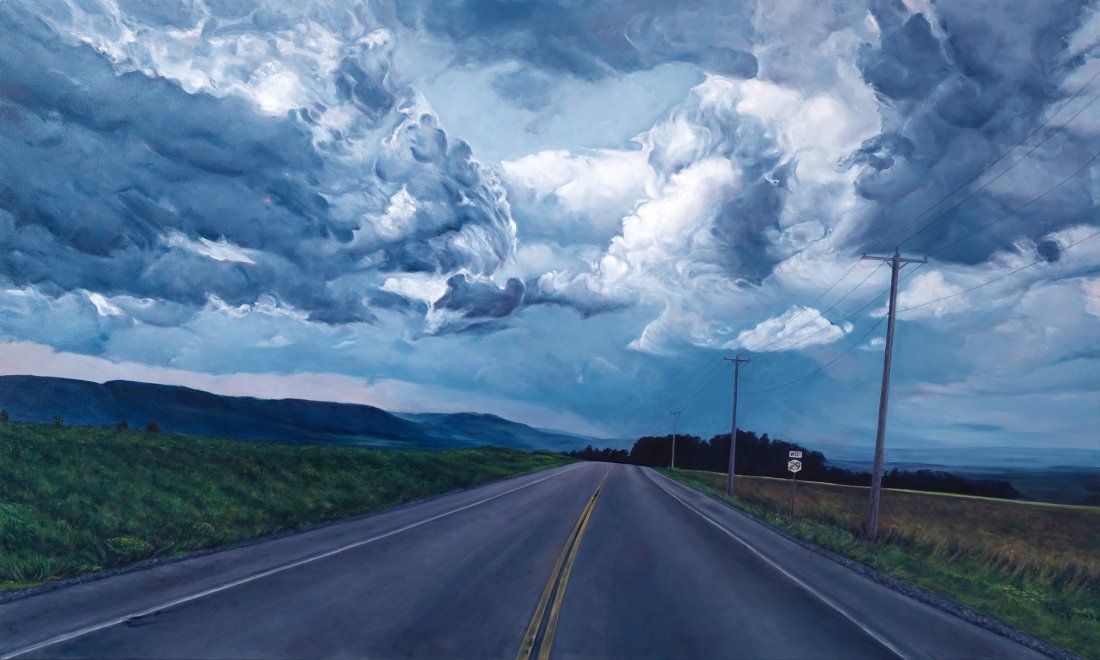 "Evening in America" is Edie Nadelhaft’s second solo show with the gallery. This new group of road-trip paintings picks up where her last series, Big Country (2017) left off. "Evening in America" focuses on the visual nuances and psychological ambiguity of twilight. Nadelhaft states, “There is a dreamy, magical and off-times haunted quality to this work that showcases otherwise unremarkable, pedestrian and distinctly American settings.” Nadelhaft draws inspiration from artists, writers and filmmakers whose work explores the subtler (and often stranger) corners of the American experience, including David Lynch, Diane Arbus, Donna Tartt, and Walker Evans, whose 1974 comment about his own process sums it up nicely: “I lean toward the enchantment, the visual power of the aesthetically rejected subject.”

An avid motorcyclist, Nadelhaft takes annual weeks-long tours of the country’s lesser-known and less spectacular outposts collecting sketches, photos and memories that form the basis for paintings of settings that hover between the built world and the natural landscape. No people are pictured, but each composition preserves some residue of the human presence: clouds gather over a neglected highway in northern Michigan; a signpost flashes by in a mysterious sequence of three small paintings depicting what might quite possibly be the literal end of the earth; the artist’s home base of New York City makes a cameo appearance in a triptych painting of a shuttered Luna Park shown at that magical impasse between day and night when the first few stars appear in the still-blue sky.

Motorcycle aesthetics feature prominently in the works, many of which are composed as rider’s-eye-view 3D constructions that incorporate actual motorcycle parts. These structures are pared down to the elegant and highly personal stylings of motorcycle culture, combining handlebars and mirror housings with custom handgrips and hardware to create sculptural objects that reference the inherent beauty of these machines. The exhibition also includes a number of traditionally stretched canvases ranging in size from 12 x 16 inches, After Robert Olsen, of a lone gas pump in the still of the night, to 36 x 60 inches, NY Route 29, depicting a desolate stretch of rural highway capped by an apocalyptic canopy of clouds. Rendered in a manner best described as perceptual realism, these paintings take the viewer into the scene, showing just as much - or as little - sharp detail as a human eye can process in person. The point of view and style of painting takes into account the fleeting nature of impressions, especially those formed while driving in low light on unfamiliar roads.

Nadelhaft states, “The exhibition title, Evening in America, is both a literal description of the paintings on view, which are all set in late afternoon or early evening, as well as a questioning of the state of the nation. The words reference Ronald Reagan’s re-election campaign ad that featured imagery of Americans starting their day in a bright sunny world, and the opening line, ‘It's morning again in America.’ We now seem to be driving on an unfamiliar road in low light. And evening is ambiguous, a potentially dangerous time in-between, especially for driving. Light is greatly diminished, but it is not quite dark enough to reap the full benefit of headlights. Buildings, trees and power lines appear and disappear in a murky, shimmering haze; nighttime is fluid, rife with intrigue and for some, even dread. But the dark can also provide a portal to the imagination, opening up new possibilities and potential.” And for this artist, it brings an overwhelming sense of wonder and relief. Daylight can be so demanding! The night - especially traveling at night - offers protection, a respite, like a spell that conjures a brief suspension of responsibility and time as one hurtles through space fully enveloped in the totality of that experience.

Edie Nadelhaft studied painting and art history at The School of the Museum of Fine Arts, Boston, MA & SUNY at Purchase, NY, and received a BFA with honors from Massachusetts College of Art & Design, Boston, MA. Her work has been exhibited at art fairs, museums and galleries throughout the US, and internationally in Taiwan, Shanghai and Basel, Switzerland. Nadelhaft’s work is in the permanent collections of The Ford Foundation, (New York, NY) The University of New Mexico Health Sciences Center, (Albuquerque, NM) and Falconworks Theatre for Social Change, (Red Hook, NY), and has been written about in The Detroit News, The American Scholar, Domino Magazine, Juxtapoz, The Washington Post, The New York Times and Wall Street International. In December 2019, Nadelhaft will be the subject of the Virtual Memories Project podcast. Awards & residencies include The Artist in Residence at Platte Clove, (Elka Park, NY), Artist in Residence at The Visible Vault, Yellowstone Art Museum, (Billings, MT), Fine Arts Painting Department Merit Award, Massachusetts College of Art, (Boston, MA), and the Combined Jewish Philanthropies Academic Scholarship, (Boston, MA). Edie Nadelhaft has lived and worked in Lower Manhattan since 1998, and has been represented by Lyons Wier Gallery since 2013

Other events from Lyons Wier Gallery