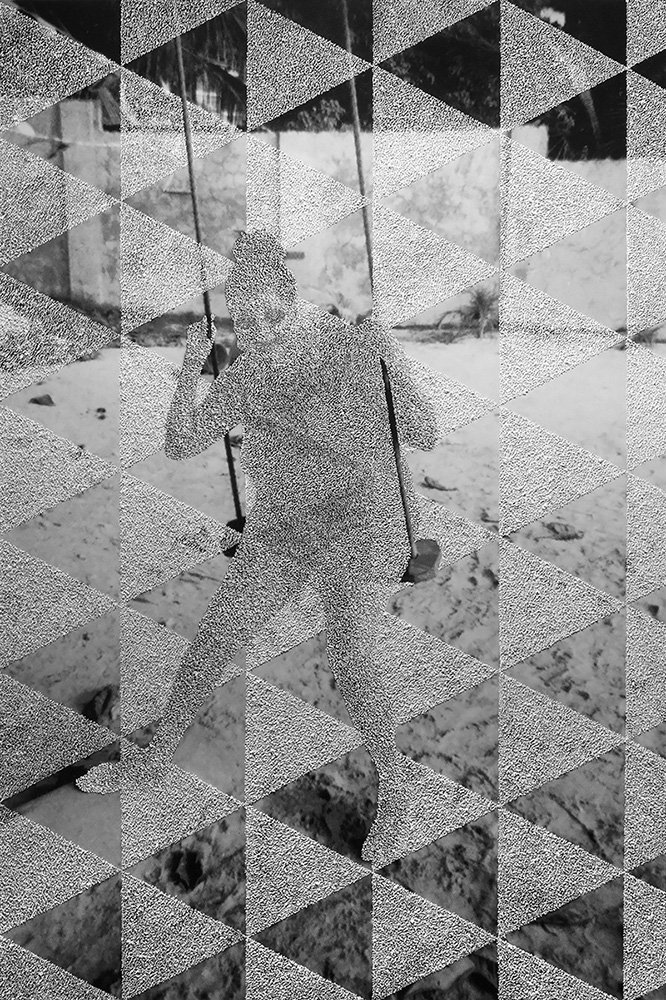 Paul Anthony Smith mines personal memory to celebrate the collective human spirit in figurative works created by two distinct but related practices. This body of work as a whole begins with photos taken by the artist on trips back to his home country of Jamaica where he captures friends, family, and other locals from “non-tourist locations.”  The images are then transformed through processes informed by his training in painting, printmaking, and sculpture.

The show will mark the exhibition debut of his sewn canvas works entitled “Grey Area.” Screenprinting black and dark blue inks on canvas, Smith then cuts, collages, and sews the pieces into fragmented wholes. The grainy results are reminiscent of faded newspaper clippings or indistinct memories. Though obscured by Smith’s methods and unknown to the viewer, each figure represent a distinct and important part of their own communities. The artist states “Just as history never fully reveals itself, being created from and by those who participated in that particular moment, these disguised images remain a memorial of past time.”

Accompanying the works on canvas are a number of “picotages” made using the unique technique that Smith introduced in 2012. The artist picks at the emulsified surfaces of photographic prints, resulting in a surface that appears both tattered and glimmering. Employing a diamond pattern borrowed from a detail of Kuba tribe masks, Smith further enhances the texture by either leaving parts untouched or picking the surface in alternate directions for a holographic effect. Whereas in earlier works, the artist focusead his action on his subjects’ faces or bodies, he now uses this process to abstract the entire image.  Here, Smith hints at the subjects’ identities with titles that refer to where the images were captured.

One of these picotaged images hangs on a cinder block wall hastily constructed in the middle of the gallery. Half-built cinder block structures are common-place in Jamaica, due to both economic instabilities interrupting projects and tropical environmental forces that strip away at buildings’ facades to reveal their rough infrastructures. The cinder block is not only a symbol of Jamaica’s bifurcated reality as a luxury destination and an emerging economy, but it is more globally a symbol of economic hope and uncertainty, the building block that unites structures from all strata.

Smith has noted that a compelling aspect of tribal masks is their symbolism of human’s duality between body and soul. Titled after a phrase the artist’s uncle used about the nimble fish known as a strong fighter and popular in Jamaican cuisine, Yellow Tail Never Kick Rocks. can ultimately been seen as an optimistic reflection of a world where human spirit transcends the material, self-awareness trumps stereotypes and community is collateral.

This is the artist’s second solo exhibition in New York. His work can currently be seen in group exhibitions in New York at the Studio Museum and the Wallach Gallery at Columbia University. A piece of his will also be included in Disguise, which will travel to the Seattle Art Museum, Fowler Museum at UCLA, and Brooklyn Museum of Art in 2015-16. Born in Jamaica and later raised in Miami, he received a BFA from the Kansas City Art Institute and now resides in New York City. Notable collections include the Nasher Museum of Art at Duke University, the Nerman Museum of Contemporary Art, the Pilara Foundation Collection (Pier 24 Photography), and the 21c Museum.