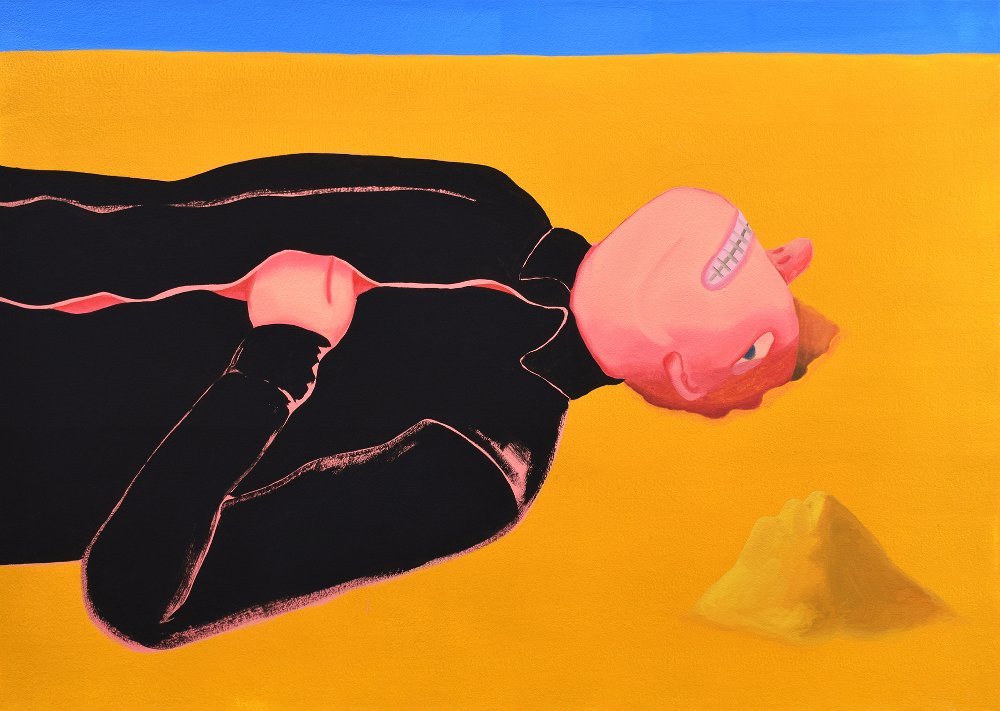 This exhibition responds to the idea of the cartoon in different ways, with a focus on figuration, fun, and interaction. Cartoons and Cereal is the first selection for our Discovery programme, which spotlights exceptional work from early career artists.

The exhibiting artists are all graduate painters from the Slade School of Fine Art, whose work shares a playful relationship with graphic art and the visual world of cartoons. Whether interested in satire, formal malleability, or direct appeals to collective nostalgia, the artists share a belief in the cartoon as a potent device in contemporary painting.

Flora Bradwell is a London based artist and curator whose work has been exhibited, screened and performed across the UK and internationally. Recent selected outings include Creekside Open, APT Gallery, London (2019), Pulling Teeth, ASC Gallery, London (2019), GENERAL STORE, Hewing Wittare, London (2018), European Media Arts Festival, Osnabrück, (2018). In 2016 Flora co-founded Inland zine and in 2017 Flora joined the icing room collective in Walthamstow curating exhibitions, interruptions of the everyday and publications with them. A compulsion towards the carnivalesque, a vibrant trashy aesthetic and the desire to playfully rub the fantastical against the everyday drives Flora Bradwell’s multifaceted practice.
@florabradwellart

Jazmin Donaldson’s work explores the idea of storytelling with painting. The stories initiate from an autobiographical point of view and then take their own form by adding fantastical elements. The characters of her paintings vary from humans to anthropomorphic animals and through the different imagery she explores themes of identity and transformation. Elements that she is interested in exploring through the fragmentation of spaces and symbolism are the impossible, the absurd and the role reversal. Jazmin lives and works in London and recently graduated from the MFA Program at the Slade School of Fine Art. Recent exhibitions include The Field, ASC Gallery London, Wells Art Contemporary, Wells, and Distant Heres, The Stone Space, London.
@jazmindonaldson_art

“Painting has its authority, family has its authority, masculinity poses as an authority. Sometimes it feels like wherever I turn there is some kind of authority, when confronted with it, I'm interested in finding points of possible transformation, through the comic, the absurd and delicate.” Will Narby is a London based artist who has shown in London as well as internationally, recent shows include: Pulling Teeth, ASC Gallery, London, I thought he was a fish, Limehouse Townhall, London, Dilbings, 48 Poland Street, London and Soft Yes, Rakursi Gallery, Sofia, Bulgaria.
@willnarby

Jack Sutherland is a London-based artist whose work looks into the human condition. Frustrating, humorous, nihilistic, silly moments taking place within the theatre of the absurd. Explorations of bodily anxiety and trepidation are paired with fizzing and playful use of colour to create work that prods at the soft underbelly of the uncanny and grazes the softly stubbled cheek of contemporary masculinity. Recent exhibitions include A RAW GARDEN, Fitzrovia Gallery, London (2019), Slade Graduate Degree Show,Slade School of Fine Art, London (2019), The Field, ASC Gallery, London (2018).
@jqsutherland

Paula Turmina is a Brazilian multidisciplinary artist whose work explores mythology and magic realism in order to imagine new perspectives of the future. Her paintings, analog films, and sculptures often create expansive imaginary visuals that concern her personal experience, ecological issues, and Latin American colonial history. She is interested in anthropological and post-colonial theories as a methodology of speculative futures that takes into account beyond human lives. Her recent shows include Latin America Myth Deconstruction, Crypt Gallery, Being Together is not Enough, Five Years Gallery, Neo Norte, Fundación Cultural de Providencia in Chile and Research Images as Art/Art Images as Research, Doctoral School (UCL).
@paulapturmina