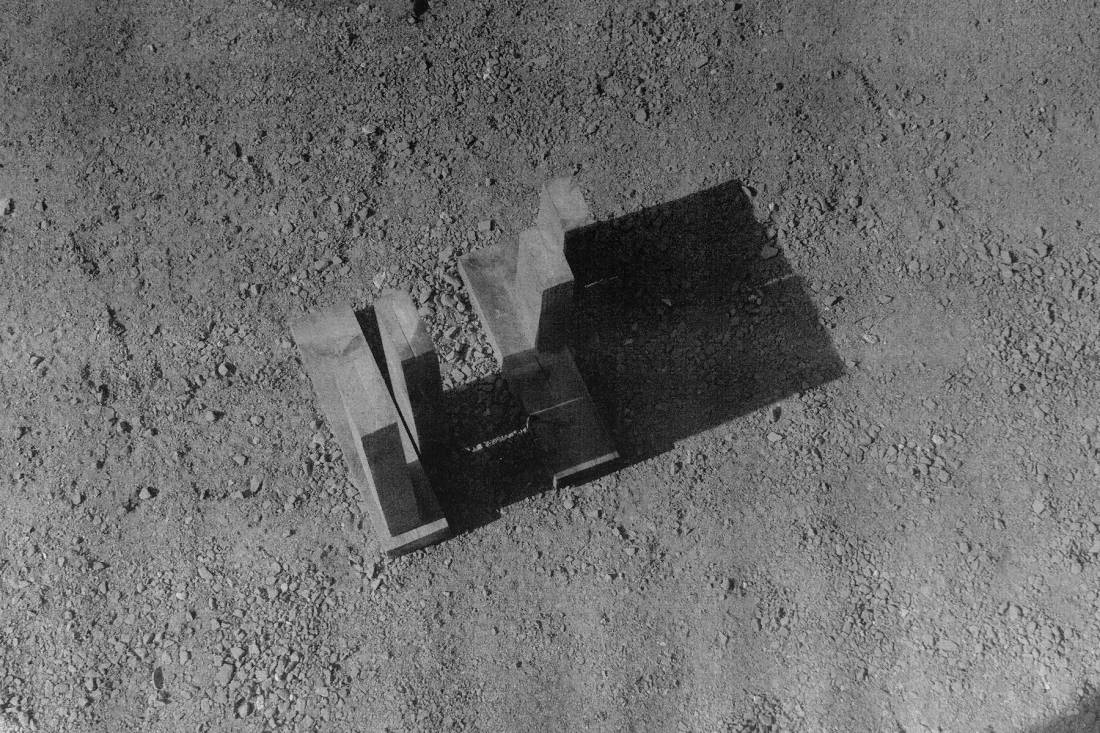 Offshoot is pleased to welcome “Single Surface” an exhibition featuring photography and installation works by artists Callum Beaney, Eva Louisa Jonas, Koji Kitagawa and Eugenie Shinkle. In these works, the artists explore the ways that photography transforms three-dimensional objects into shapes on a two-dimensional surface.

The photographers in this exhibition have come together out of a shared interest in exploring the dialogue between two and three dimensions, and the materials and processes by which photographs are reproduced, transformed, and seen. Photographs can be endlessly manipulated, repeated and shared, each time producing a variation of the same original. The four artists have taken this technical freedom as a starting point to experiment with their images, creating artworks that embrace the materials and processes used to create them.

Callum Beaney & Eugenie Shinkle experimented with multiple photocopies of simple assemblies made from wooden blocks. Though the project began as an exploration of spatial perception, the duo came to treat the photocopies themselves as raw material from which to create new multi-image assemblies. Eva Louisa Jonas took a black backdrop from her studio and laid folded sheets of blank paper on it to produce an illusion of depth, like shapes floating in a void. These materials represent both ends of her production process: the paper on which she shoots her still-lifes, and the paper on which she prints the photographs. Koji Kitagawa repeatedly xeroxed an old family photograph of three puppies, randomly changing the xerox machine’s settings in the process. The colours and textures vary; some are soft and inviting, others sharp, distorted and other-worldly, changing the way the image appears. Each iteration warps the original memory, but also creates a new one.

Beaney & Shinkle’s collaborative work “The Prototype” began with a series of photographs of simple arrangements of wooden blocks and their shadows. The duo then experimented with the spatial and structural aspects of these photographs by rotating, repeating, layering and re-ordering them into grids and sequences. Their work includes risograph and poster prints, a framed collage, accordion books, and a large-scale collage made by the duo on site. Each of these pieces can be referenced back to the original series, but has been built with its own simple logic or method.

Jonas’ work “Material Anyways” is concerned with the relationship between image and surface. Folding sheets of plain paper and then arranging and layering them upon a black studio backdrop, Jonas's images simultaneously produce an illusion of depth, demonstrating the means by which they were made. The resulting images begin to lose perceptual scale and depth, appearing as shapes floating in a void. Jonas’ work is displayed in wall pieces and arrangements of smaller prints on plinths.

Kitagawa’s work “Fur” is concerned with image and texture. After finding a photo of three dogs in an old album, he repeatedly copied it with randomised output settings on a xerox machine, changing them into different colours and degrees of contrast. The gradually abstracting image is sometimes soft and inviting, sometimes sharp, distorted and other-worldly. Each warps the original memory, but in a sense also makes a new one. Kitagawa’s work is displayed here as a grid that emphasises the subtle differences between individual images.

Offshoot Gallery was established in 2019. The gallery is located in East Finchley, North London. Our programme is focused on emerging artists and curators, providing curatorial and artist-led exhibitions. These exhibitions and events aim to engage with the local community, encouraging intercultural exchange.